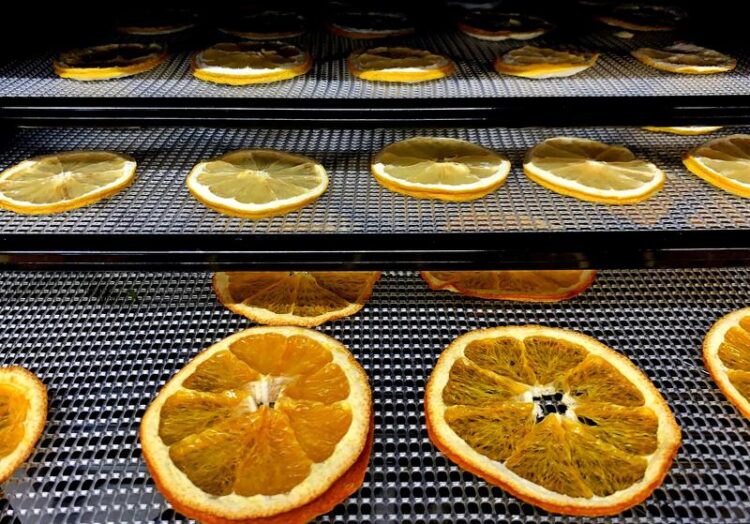 Drying with ionic wind: If the fruit slices are placed on a mesh, they are dried faster and more evenly.
Empa

After the summer harvest, fruits are sold as dried products suitable for the current season. However, if fruit or vegetables are dried with heat, nutrients can be destroyed and flavors can be reduced. This is why non-thermal drying of food – i.e. without heating – is preferred by the industry. Among other things, fans are used for this purpose. A new drying process developed at Empa using ionic wind promises to make the non-thermal drying of food much more energy-efficient, faster and even gentler.

When the blades of a fan rotate, a steady wind is blowing as a result. This phenomenon is well known from everyday life, and so we use the fan on hot summer days to cool us down. An unwanted side effect is the unpleasant feeling in the eyes, which become drier and drier due to the artificial wind. The food industry has been taking advantage of this effect for a long time: Fruit and veggies are preferably dried without heat, because heat deteriorates nutrients and flavor.

The so-called non-thermal convective drying of food with the help of large fans has a drawback, however: The drying process is time-consuming and requires a lot of energy. This is why industry has been looking to find a more energy-efficient method for a long time. One alternative technology is based on the so-called ionic wind. Although this already works on a small scale, attempts to upscale the concept for industry have failed so far. Empa researchers have now developed a more energy-efficient drying system based on ionic wind, which is perfectly suitable for industrial applications.

Wind, without any moving components

Ionic wind is not generated by the rotating blades of a fan; it is created by connecting, for instance, a metal wire to a high-voltage source with a positive voltage of 10,000 to 30,000 volts. This charges the wire positively and ionizes the surrounding air. Air consists of various gases such as oxygen (O2), nitrogen (N2) or carbon dioxide (CO2). Each of these molecules consists of atoms, which in turn consist of positively charged elementary particles – the protons – and negatively charged particles – the electrons. The electrons are attracted by the positively charged wire, while the much heavier protons are repelled by the wire. These electrostatic forces ultimately cause electrons to “split off” from the (electrically neutral) gas molecules, the remaining molecules are now positively charged – or “ionized”. The positive ions collide with other air molecules on their way away from the wire towards the grounded collector located below the wire and set them in motion. This impulse, or rather the particle movement triggered by it, then creates the ionic wind, which is also known as electrohydrodynamic airflow.

Researchers tried to make use of ionic wind with different approaches for the industrial drying of food – but so far without remarkable success, because an upscaling was not possible. Empa researcher Thijs Defraeye from the “Biomimetic Membranes and Textiles” lab and his team pursued the idea further and varied various process parameters. First, the researchers did not place the food to be dried on a tray as it was done previously, but used a mesh instead. “Now this isn’t exactly rocket science, but so far no one has considered this adaptation for the drying with ionic wind,” says the Empa researcher.

What sounds like a small change makes a huge difference, though: The water can now evaporate from all sides of the fruits or vegetables. As a result, the ionic wind dries the food twice as fast as on an impermeable tray, which was used by researchers over the world so far. But above all, the ionic wind dries fruit and vegetables more uniformly on the mesh. In contrast to the previous approaches of electrohydrodynamic drying, the new design is also easier to scale up – and thus extremely interesting for industry.

A new system – from computer modeling

In refining their new concept further, Empa researchers relied on complex computer simulations. This allows various dryer device adjustments and their influence on the drying process to be simulated virtually. Hence, the system can be optimized “in silico” without having to physically build new drying equipment each time.

But can the results of the computer calculation be successfully transferred into the real world? Is it really possible to optimize the process in this way? In cooperation with researchers from Dalhousie University in Canada, a first prototype of the new drying system was built in their lab. Initial tests did indeed show considerable improvements: Drying by means of ionic wind is much faster and consumes less than half the energy required by conventional processes. In addition, the food is dried more evenly and the nutrients are preserved much better. Last but not least, the process can be scaled up to industrial scale rather easily. Defraeye and his team are currently working with a Swiss retailer to develop the concept further.