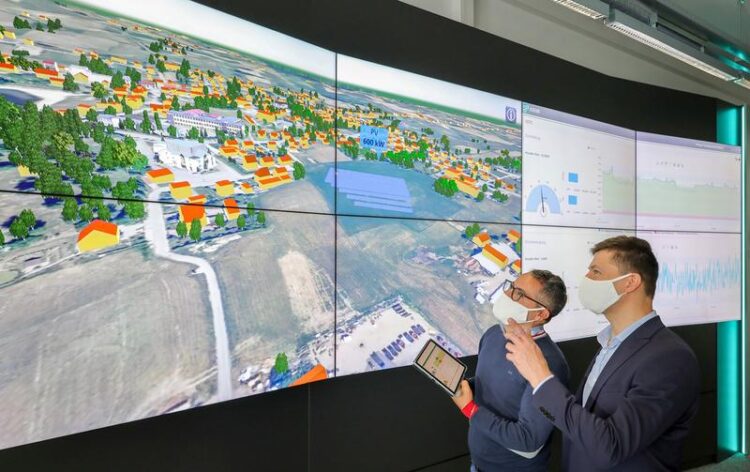 Virtual assistance for the design of microgrids in rural areas.
© Fraunhofer IFF

Germany is supposed to become climate-neutral by 2045. The federal govern-ment’s new climate protection law stipulates this. Greenhouse gas emissions are supposed to drop at 65 percent below their 1990 values by the year 2030. Many innovative ideas and solutions are needed to implement this ambitious plan. Together with their partners, research scientists at the Fraunhofer Institute for Factory Operation and Automation IFF are making a contribution in the RIGRID project: Its objective is to supply rural areas with power sustainably, cost-effectively and reliably.

Ninety percent of the area of Germany is rural according to the federal government. Approximately 44 million people, i.e., over half the population, live in the countryside. This is true for all of Europe: The majority do not live in urban centers. Tranquility, nature and affordable rents are advantages of country life. The idyll has its drawbacks too, though, such as the poor power supply infrastructure, the upgrading of which has been neglected over the past decades. Rural areas in Europe are sometimes supplied power by just one single line. Grids are antiquated. This is aggravated by growing power consumption. Supply shortages can occur over and over as a result.

The partners in the RIGRID project, short for Rural Intelligent Grid, aimed to supply rural regions with electricity safely, reliably, cost-effectively and environmentally soundly. They see the future in the development of renewable energy and the installation of distributed smart grids that enable integrating smaller energy producers in the grid and increasing independence from central electricity supply structures. Such a regional smart grid and management system was developed in the RIGRD project and tested as a model in the village of Puńsk in Poland and the municipality of Dardesheim in the Harz region of Saxony-Anhalt in Germany. This new tool can be used to design, establish and operate new energy infrastructures and supply systems optimally in rural regions. Along with the Fraunhofer IFF, Harz-Regenerativ-Druiberg e.V. and RegenerativKraftwerke Harz RKWH GmbH were partners in the completed project.

“Smart grids help coordinate the fluctuating supply of electricity from renewable sources, among other things,” says Prof. Przemyslaw Komarnicki, research scientist at the Fraunhofer IFF and manager of its Department of Energy Systems and Infrastructures ESI. As the project coordinator, he developed the virtual-interactive energy infrastructure-design tool together with his team. The research scientists installed a small demonstration grid for the pilot microgrid in Puńsk, which includes the local sewage treatment plant, a photovoltaic system and a battery energy storage system. They used it to test their system’s operation live and its acceptance among residents.

The user-friendly design tool imports the 3D spatial data of the areas concerned, including buildings, and transfers them to a virtual scenario. Operators and residents use it on site to design their energy supply system and the requisite infrastructure interactively and individualized. “Specifically, users would be able to model and view costs, the carbon footprint and dependence on the public grid if photovoltaic systems were installed atop every roof in the village of Puńsk. Any number of other mathematical models are conceivable too, of course,” says the engineer explaining an implementation scenario. What impact would additional wind turbines have on the supply situation? What consequences would expanding electric transportation have for mass transit? All these factors can be included.

The software not only includes technical and economic but also socioeconomic factors and environmental and urban planning factors. “How many jobs can sustainable energy supply systems create in a small community? What will our city/town look like afterward or will we accept the structural changes brought about by new wind turbines, for instance? Our design tool answers such questions too,” says Komarnicki explaining the platform’s distinctive feature. Including and implementing the regional technical, economic and social conditions in the design was crucial. Only this enables a successful energy transformation process. This process was successful in Puńsk: Not only was it possible to boost energy efficiency and cut carbon emissions but the system also won over residents after initial skepticism.

Communities Have Freedom of Choice

The interactive design tool comprises three modules: The virtual 3D visualization module is used to review new investments in terms of the availability of renewable energy sources. The economic module is used to assess the returns on investments, factoring in potential technologies, local environmental factors, and consumption and geographic data. The technical module completes the software. It is used to draft designs for low and medium voltage microgrids and their components.

The design system lets communities decide what they feel is important for their energy supply and how independently they want to live from externally supplied electricity. The system proposes the optimal strategy for ensuring a stable energy supply, depending on whether a maximum of their own solar electricity or an alternative energy mix with outside suppliers is important to them.

The tool enables small communities to contribute to the energy transition. “A lot has already happened in model regions, such as Saxony-Anhalt where renewable energy is already being used intensively. Other regions are approaching the issue of sustainable energy supply slower, though. Our interactive design platform helps them supply them-selves with green power,” says the research scientist.