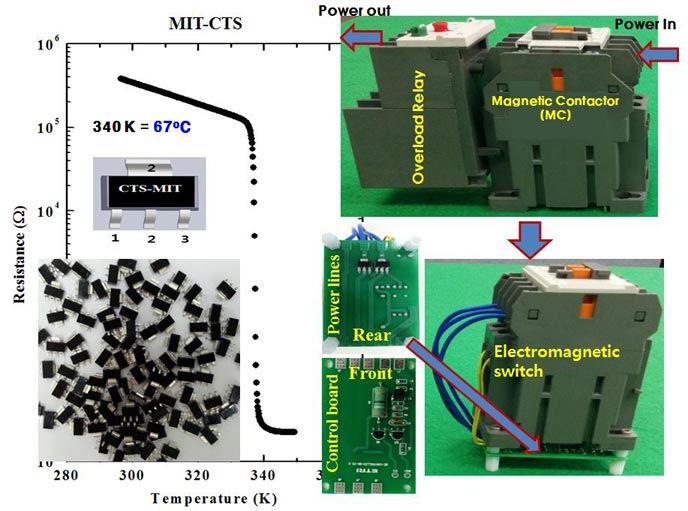 Left figure shows the temperature dependence of resistance of the developed Mott MIT VO2 device and its photo. Right side exhibits the commercial overload relay and magnetic contact (electromagnet) and the developed electromagnetic switch.

The Mott MIT signifies the phenomenon that a Mott insulator is abruptly converted into a metal or vice versa without the structural phase transition. The research team previously developed a Mott MIT critical temperature switch (CTS) (or MIT device) which generates a control current (or signal) at a critical temperature between 67oC and 85oC as the unique characteristic of vanadium dioxide. After that, the MIT devices were applied to some kinds of electromagnetic switches that interrupt an electric current in case of overcurrent.

An existing traditional electromagnetic switch that takes the role to interrupt electricity through the mechanical switching when it conducts an overcurrent is composed of both an electromagnet called the magnetic contactor, which connects or disconnects signals of main power, and the thermal overload relay with an on-off switching function controlled by temperature.

The overload relay is composed of both an expensive delicate mechanical switch with a large size and a bimetal that is made of two separate metals with different thermal expansion coefficients joined together. The bimetal has a characteristic of bending to any direction when heat is applied.

The bending force of the bimetal controls the mechanical switch inducing the on-off switching; this has been called ‘hundred years technology of power interruption’; Westinghouse applied the patent right of the power circuit breaker using a bimetal in 1924. However, the bimetal undergoes a change of the bending characteristic during a long-term usage. Therefore, the accuracy of the overload relay drops.

In order to solve the problem, the research team uses the MIT-CTS instead of the bimetal as a sensor for the on-off switch. In this case, the mechanical switch is replaced by a simple electrical circuit controlling the electromagnet, which means that the mechanical switching is changed into the electronic one. Therefore, the MIT overload relay becomes small in size by removing the large mechanical switch and has the accuracy irrespective of environment temperature during long term. Accordingly, the MIT electromagnetic switch has a reliable and accurate electronic switching characteristic.

The research team confirmed that the developed MIT electromagnetic switch is satisfied with the operating conditions of the overload relay given in a Korean technology standard, Article 5.6, KSC 4504 compatible with the international standard 60947-4-1. The team also checked through experiments that the circuit breaker using the bimetal operated below AC 1 KV can be replaced by that made of the developed MIT electromagnetic switching technology.

A market report on “The World Market For Transmission & Distribution Equipment and Systems” (Gould Report, 2013) announced that the sales of the worldwide power switch and circuit breaker markets will reach to approximate $29.5 billion in 2016.

About ETRI
Established in 1976, ETRI is a non-profit Korean government-funded research organization that has been at the forefront of technological excellence for about 40 years. In the 1980s, ETRI developed TDX(Time Division Exchange) and 4M DRAM. In the 1990s, ETRI commercialized CDMA(Code Division Multiple Access) for the first time in the world. In the 2000s, ETRI developed Terrestrial DMB, WiBro, and 4G LTE Advanced, which became the foundation of mobile communications. Recently, as a global ICT leader, ETRI has been advancing communication and convergence by developing SAN(Ship Area Network) technology, Genie Talk(world class portable automatic interpretation; Korean-English/Japanese/Chinese), and automated valet parking technology. As of 2015, ETRI has about 2,000 employees where about 1,800 of them are researchers.
* Homepage : https://www.etri.re.kr/eng/main/main.etri