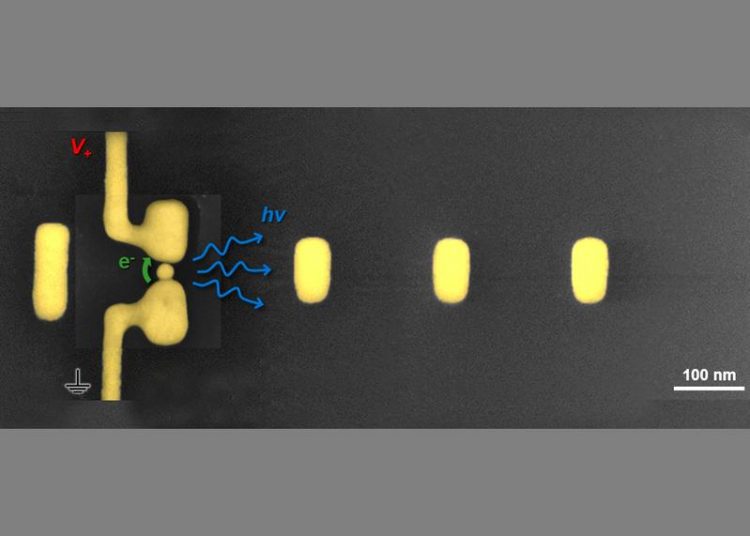 Directional antennas convert electrical signals to radio waves and emit them in a particular direction, allowing increased performance and reduced interference. This principle, which is useful in radio wave technology, could also be interesting for miniaturised light sources.

After all, almost all Internet-based communication utilises optical light communication. Directional antennas for light could be used to exchange data between different processor cores with little loss and at the speed of light.

To enable antennas to operate with the very short wavelengths of visible light, such directional antennas have to be shrunk to nanometre scale.

Würzburg physicists have now laid the foundation for this technology in a pioneering publication: In the magazine “Nature Communications”, they describe for the first time how to generate directed infrared light using an electrically driven Yagi-Uda antenna made of gold.

The antenna was developed by the nano-optics working group of Professor Bert Hecht, who holds the Chair of Experimental Physics 5 at the University of Würzburg.

The name “Yagi-Uda” is derived from the two Japanese researchers, Hidetsugu Yagi and Shintaro Uda, who invented the antenna in the 1920s.

What does a Yagi-Uda antenna for light look like? “Basically, it works in the same way as its big brothers for radio waves ,” explains Dr. René Kullock, a member of the nano-optics team. An AC voltage is applied that causes electrons in the metal to vibrate and the antennas radiate electromagnetic waves as a result.

“In the case of a Yagi-Uda antenna, however, this does not occur evenly in all directions but through the selective superposition of the radiated waves using special elements, the so-called reflectors and directors,” says Kullock.

Applying the laws of antenna technology to nanometre scale antennas that radiate light is technically challenging. Some time ago, the Würzburg physicists were already able to demonstrate that the principle of an electrically driven light antenna works. But in order to make a relatively complex Yagi-Uda antenna, they had to come up with some new ideas.

In the end, they succeeded thanks to a sophisticated production technique: “We bombarded gold with gallium ions which enabled us to cut out the antenna shape with all reflectors and directors as well as the necessary connecting wires from high-purity gold crystals with great precision,” explains Bert Hecht.

“This gap is so narrow that electrons can cross it when voltage is applied using a process known as quantum tunnelling,” explains Kullock. This charge motion generates vibrations with optical frequencies in the antenna which are emitted in a specific direction thanks to the special arrangement of the reflectors and directors.

Accuracy dependent on number of directors

The Würzburg researchers are fascinated by the unusual property of their novel antenna that radiates light in a particular direction although it is very small. As in their “larger counterparts”, the radio wave antennas, the directional accuracy of light emission of the new optical antenna is determined by the number of antenna elements.

“This has allowed us to build the world's smallest electrically powered light source to date which is capable of emitting light in a specific direction,” Hecht details.

However, much work still needs to be done before the new invention is ready to be used in practice. Firstly, the physicists have to work on the counterpart that receives light signals. Secondly, they have to boost the efficiency and stability.