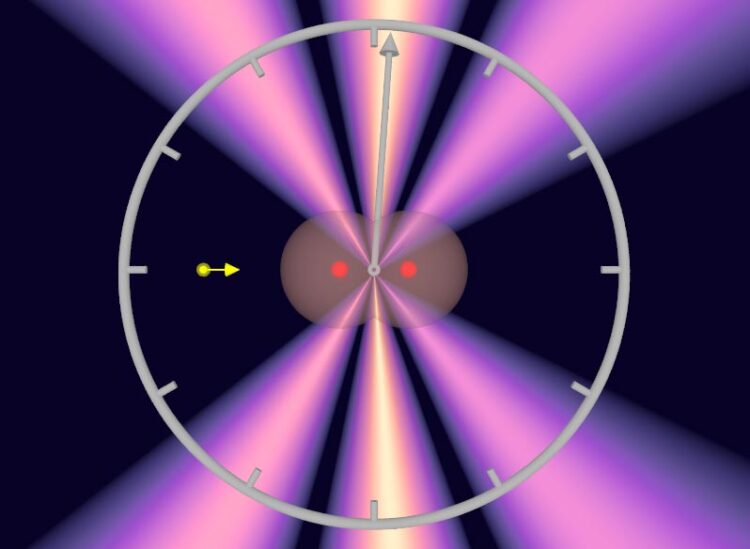 Schematic representation of zeptosecond measurement. The photon (yellow, coming from the left) produces electron waves out of the electron cloud (grey) of the hydrogen molecule (red: nucleus), which interfere with each other (interference pattern: violet-white). The interference pattern is slightly skewed to the right, allowing the calculation of how long the photon required to get from one atom to the next.
Photo: Sven Grundmann, Goethe University Frankfurt

In the global race to measure ever shorter time spans, physicists from Goethe University Frankfurt have now taken the lead: together with colleagues at the accelerator facility DESY in Hamburg and the Fritz-Haber-Institute in Berlin, they have measured a process that lies within the realm of zeptoseconds for the first time: the propagation of light within a molecule. A zeptosecond is a trillionth of a billionth of a second (10 exp -21 seconds).

In 1999, the Egyptian chemist Ahmed Zewail received the Nobel Prize for measuring the speed at which molecules change their shape. He founded femtochemistry using ultrashort laser flashes: the formation and breakup of chemical bonds occurs in the realm of femtoseconds. A femtosecond equals 0.000000000000001 seconds, or 10 exp -15 seconds.

Now atomic physicists at Goethe University in Professor Reinhard Dörner’s team have for the first time studied a process that is shorter than femtoseconds by magnitudes. They measured how long it takes for a photon to cross a hydrogen molecule: about 247 zeptoseconds for the average bond length of the molecule. This is the shortest timespan that has been successfully measured to date.

The scientists carried out the time measurement on a hydrogen molecule (H2) which they irradiated with X-rays from the synchrotron lightsource PETRA III at the Hamburg accelerator centre DESY. The researchers set the energy of the X-rays so that one photon was sufficient to eject both electrons out of the hydrogen molecule.

Electrons behave like particles and waves simultaneously, and therefore the ejection of the first electron resulted in electron waves launched first in the one, and then in the second hydrogen molecule atom in quick succession, with the waves merging.

The photon behaved here much like a flat pebble that is skimmed twice across the water: when a wave trough meets a wave crest, the waves of the first and second water contact cancel each other, resulting in what is called an interference pattern.

The scientists measured the interference pattern of the first ejected electron using the COLTRIMS reaction microscope, an apparatus that Dörner helped develop and which makes ultrafast reaction processes in atoms and molecules visible. Simultaneously with the interference pattern, the COLTRIMS reactions microscope also allowed the determination of the orientation of the hydrogen molecule. The researchers here took advantage of the fact that the second electron also left the hydrogen molecule, so that the remaining hydrogen nuclei flew apart and were detected.

“Since we knew the spatial orientation of the hydrogen molecule, we used the interference of the two electron waves to precisely calculate when the photon reached the first and when it reached the second hydrogen atom,” explains Sven Grundmann whose doctoral dissertation forms the basis of the scientific article in Science. “And this is up to 247 zeptoseconds, depending on how far apart in the molecule the two atoms were from the perspective of light.”

Professor Reinhard Dörner adds: “We observed for the first time that the electron shell in a molecule does not react to light everywhere at the same time. The time delay occurs because information within the molecule only spreads at the speed of light. With this finding we have extended our COLTRIMS technology to another application.”

Caption: Schematic representation of zeptosecond measurement. The photon (yellow, coming from the left) produces electron waves out of the electron cloud (grey) of the hydrogen molecule (red: nucleus), which interfere with each other (interference pattern: violet-white). The interference pattern is slightly skewed to the right, allowing the calculation of how long the photon required to get from one atom to the next. Photo: Sven Grundmann, Goethe University Frankfurt