What causes the mysterious XENON1T signal? 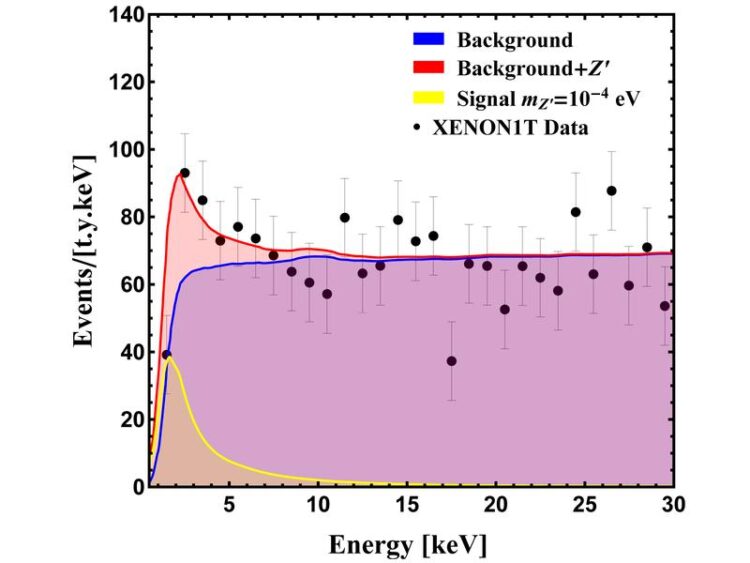 Event rate for electronic recoils as a function of the electron recoil energy at XENON1T in the model of [5].
MPIK

The XENON collaboration recently announced an unexpected signal. The collaboration emphasizes that some new, hitherto unrecognized background might be the cause. The signal could, however, equally well be the first indication of some “new physics” beyond the Standard Model of elementary particle physics. This prospect attracted theorists world-wide to suggest and analyze potential explanations in terms of some new physics. Theorists at MPIK who are close to the experiment also study extensions of the Standard Model with suitable parameters that would not only explain the XENON1T signal, but are also compatible with data from other experiments and cosmological observations.

Interpreting the unexpected XENON1T signal in the low-energy electron-recoil spectrum as an onset for new physics leads to exciting possibilities pointing in different directions being explored by theorists around the world. Various members of Manfred Lindner’s division and the independent group of Florian Goertz at MPIK also submitted a number of publications which are very well received and some of them have been marked by the journal editors as “suggestions”.

Neutrinos are one of the most abundant of all known particles in the Universe, but yet the least understood ones. In the Standard Model, neutrinos are massless and interact only via the weak force. The discovery of neutrino oscillations implies, however, that neutrinos are massive and mixed. Therefore, the Standard Model must be extended to account for the tiny neutrino masses. In these extensions, neutrinos acquire also electromagnetic properties through quantum loops effects. Hence, the theoretical and experimental investigation of neutrino electromagnetic interactions can serve as a powerful tool in the search for the fundamental theory behind the neutrino mass generation mechanism.

The excess in electron recoil events reported recently by the XENON1T experiment could be evidence for a sizable so-called transition magnetic moment of solar neutrinos. Such a large value typically leads to unacceptably large neutrino masses. The authors [1] show that new leptonic symmetries can solve this magnetic moment–mass conundrum. They discuss several model examples and show how stringent astrophysical limits on neutrino magnetic moments arising from stellar evolution are avoided. Such extensions furthermore predict signals of new physics that could be discovered by other upcoming collider and low-energy experiments.

In [2], the authors studied the possibility of explaining the unexpected signal at XENON1T through the transition magnetic moment which is the interaction of neutrinos with photons and yet undiscovered, but well-motivated, heavy neutrinos. The successful parameter space was identified and constrained by the known physics of the early Universe as well as astrophysical objects such as supernovae. The authors also investigated potential implications of this interaction at other terrestrial experiments like Borexino (a neutrino detector located in Italy) and even proposed a successful high-energy model for the realization of the aforementioned interaction at lower energy scales. In that sense, this paper has a long-term value even if the signal at XENON1T would turn out not to be connected with new physics.

Another interpretation of the excess [3] could be a direct interaction of Dark Matter particles or neutrinos via new so-called non-standard interactions (NSI’s). Such NSI’s could arise as effective interactions from different new physics scenarios. The neutrino interpretations of the excess are of two types: the inverse recoiled energy enhances or suppresses NSI’s. Investigating this approach in detail, it was found that non-standard neutrino interactions of vector nature and milli-charges of the neutrinos from the electromagnetic nature of interactions are the leading candidates to explaining the XENON1T excess. This was further studied in more detail and strengthened in [4] using the follow-up data of PandaX-II – a similar experiment that has also observed a low-energy recoil excess, but with less statistics. The team argued that the excess is degenerate to the tritium background they observed.

The observed excess could also be explained by a new force mediated by a new light particle that couples neutrinos to electrons [5]. Formulating this in a complete theory consistent with the Standard Model of particle physics, and not excluded by other laboratory experiments or astronomical data, has important consequences: The dominant interaction of solar neutrinos with the electrons of the xenon atoms would not be a mere elastic collision. Instead, the solar neutrinos would react with the electrons in xenon to produce new hypothetical “hidden” neutrinos in the XENON1T detector. While those new particles would leave the detector invisibly, the resulting electron energy spectrum would be characteristically different as compared to other explanations. Therefore, this explanation could be distinguished from others already with the additional data expected from XENONnT. Given that it is based on a complete theory, this explanation furthermore predicts signals of new physics that could be discovered by other experiments, namely ATLAS and CMS at the LHC, as well as by ALPSII at DESY.

A further possibility aiming at an explanation of the XENON1T excess is linking it to Dark Matter [6]. The exact nature of the of non-luminous matter in the Universe is unknown and its impact can therefore be studied by characterizing its properties in general terms by so-called effective theories. One of these models also contains the necessary ingredients to explain the XENON1T excess. In this model, the excess could be the result of solar neutrinos scattering in the detector through a light new scalar mediator to the dark sector. This new particle would not only cause the observed characteristic energy distribution, it would also give the neutrinos its mass, providing an explanation for their lightness, and being the link to the Dark Matter in our Universe.

These publications are part of an on-going vibrant discussion on possible explanations of the observed excess. The theoretical activities provide also very useful input for the experimental search strategies of various other experiments. At the same time, efforts are being made to check all sort of experimental aspects and to perform further cross-checks. Manfred Lindner is optimistic that the puzzle will be resolved in the near future: “The XENON1T detector was meanwhile upgraded to XENONnT and is being readied to take significantly more data with better sensitivity. This will allow various more detailed studies and tests.” An annual modulation of the signal consistent with the distance variations of the Sun over the year would, for example, strengthen explanations where new interactions of solar neutrinos or a flux of hypothetical axions explain the signal.