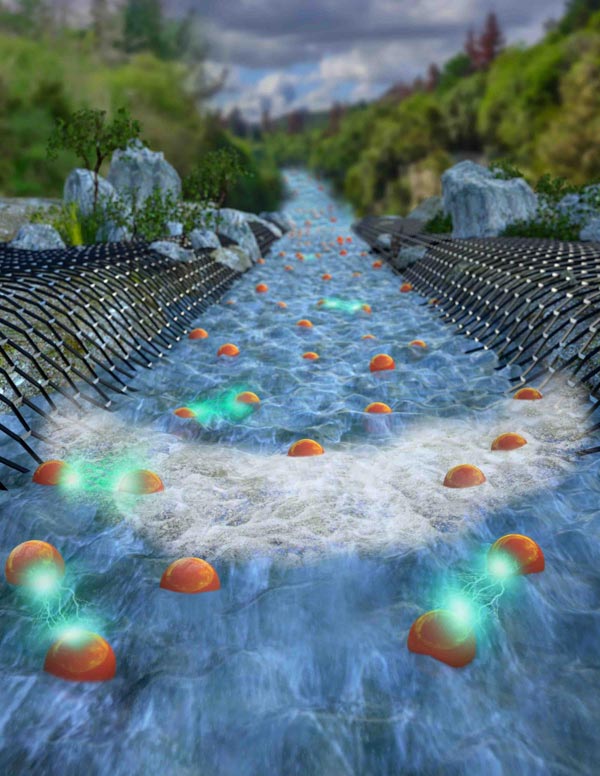 This is a 'river' of electrons flowing in a graphene channel. The viscosity generated by the repulsion between electrons (red balls) causes them to flow with a parabolic current density, illustrated here as a white foam wavefront Credit: Weizmann Institute of Science

From roaring waves to swirling whirlpools, the flow of a liquid can be extremely rich. Such varied phenomena are the result of the many collisions that occur between the particles that make up a liquid, and is described by the physics of hydrodynamics.

However, despite being negatively charged, electrons usually flow through a conductor like a gas in a randomized fashion essentially without repelling each other. This is because most conductors are made from materials that are highly disordered, and the electrons flowing inside collide more frequently with the many impurities and imperfections.

To make electrons flow like a liquid, one needs a more advanced conductor, for example, graphene — a one atom-thick sheet of carbon, which can be made exceptionally clean. “Theories suggest that liquid electrons can perform cool feats that their ballistic or diffusive counterparts cannot.

But to get a clear-cut proof that electrons can indeed form a liquid state, we wanted to directly visualize their flow,” said Prof. Shahal Ilani, head of the Weizmann team in the Department of Condensed Matter Physics.

Visualizing hydrodynamic electron flow in a material like graphene isn't straightforward, though, as it requires a special technique that is simultaneously powerful enough to peer inside a material, yet gentle enough to avoid disrupting the electron flow.

The Weizmann team created such a technique, which they published recently in Nature Nanotechnology [1]. They produced a nanoscale detector built from a carbon nanotube transistor that can image the properties of flowing electrons with unprecedented sensitivity. “Our technique is at least 1000 times more sensitive than alternative methods, which enables us to image phenomena that previously could only be studied indirectly,” said Dr. Joseph Sulpizio, from Weizmann.

In their new paper, now published in Nature [2], the Weizmann researchers applied their novel imaging technique to state-of-the-art graphene devices produced by the group of Prof. Andre Geim at the University of Manchester.

These devices are shaped into channels that guide the flowing electrons, similar to the way a pipe guides the flow of water. And just as water flows through a pipe, the electrons in the graphene were observed flowing faster in the center of the channels and slower at the walls, which is the hallmark of hydrodynamic flow.

This work demonstrates that the patterns of a conventional fluid can be mimicked by electrons. This may prove beneficial for creating new types of electronic devices, including low-power devices in which the hydrodynamic flow lowers the electrical resistance. “Computing centers and consumer electronics are devouring an ever-increasing amount of energy, and in light of climate change, it's imperative to find ways to make electrons flow with less resistance,” said Dr. Lior Ella from Weizmann.

Prof. Shahal Ilani's research is supported by the Sagol Weizmann-MIT Bridge Program; the André Deloro Prize for Scientific Research; the Leona M. and Harry B. Helmsley Charitable Trust; and the European Research Council.

The Weizmann Institute of Science in Rehovot, Israel, is one of the world's top-ranking multidisciplinary research institutions. Noted for its wide-ranging exploration of the natural and exact sciences, the Institute is home to scientists, students, technicians and supporting staff. Institute research efforts include the search for new ways of fighting disease and hunger, examining leading questions in mathematics and computer science, probing the physics of matter and the universe, creating novel materials and developing new strategies for protecting the environment.