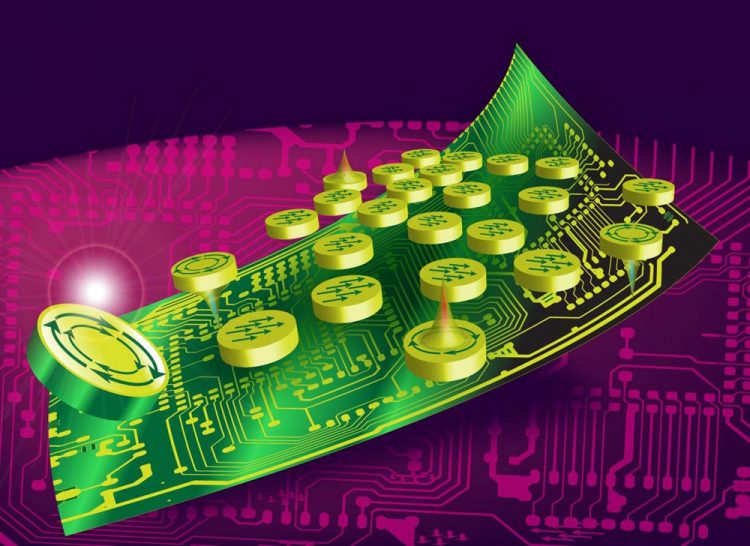 Researchers from the University of South Florida College of Engineering have proposed a new form of computing that uses circular nanomagnets to solve quadratic optimization problems orders of magnitude faster than that of a conventional computer.

A wide range of application domains can be potentially accelerated through this research such as finding patterns in social media, error-correcting codes to Big Data and biosciences.

In an article published in the current issue of Nature Nanotechnology, “Non Boolean computing with nanomagnets for computer vision applications,” authors Sanjukta Bhanja, D.K. Karunaratne, Ravi Panchumarthy, Srinath Rajaram, and Sudeep Sarkar discuss how their work harnessed the energy-minimization nature of nanomagnetic systems to solve the quadratic optimization problems that arise in computer vision applications, which are computationally expensive.

According to the authors, magnets have been used as computer memory/data storage since as early as 1920; they even made an entry into common hardware terminology like multi-“core.” The field of nanomagnetism has recently attracted tremendous attention as it can potentially deliver low-power, high speed and dense non-volatile memories.

It is now possible to engineer the size, shape, spacing, orientation and composition of sub-100 nm magnetic structures. This has spurred the exploration of nanomagnets for unconventional computing paradigms.

By exploiting the magnetization states of nanomagnetic disks as state representations of a vortex and single domain, the research team has created a modeling framework to address the vortex and in-plane single domain in a unified framework and developed a magnetic Hamiltonian which is quadratic in nature.

The implemented magnetic system can identify the salient features of a given image with more than 85 percent true positive rate. This form of computing, on average, is 1,528 times faster than IBM ILOG CPLEX (an industry standard software optimizer) with sparse affinity matrices (four neighbor), and 468 times faster with denser (eight neighbor) affinity matrices. These results show the potential of this alternative computing method to develop a magnetic coprocessor that might solve complex problems in fewer clock cycles than traditional processors.

This work was sponsored in part by National Science Foundation NSF CAREER grant no. 0639624, NSF (CRI) grant no. 0551621 and NSF (EMT) grant no. 0829838. Most of the fabrication and characterization is done at USF Nanotechnology Research and Education Center (NREC).

About the University of South Florida

The University of South Florida is a high-impact, global research university dedicated to student success. USF is a Top 50 research university among both public and private institutions nationwide in total research expenditures, according to the National Science Foundation. Serving nearly 48,000 students, the USF System has an annual budget of $1.5 billion and an annual economic impact of $4.4 billion. USF is a member of the American Athletic Conference.