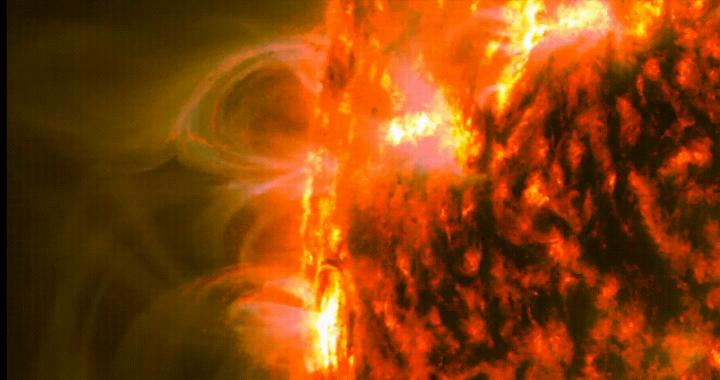 Mason, a graduate student at The Catholic University of America in Washington, D.C., was searching for coronal rain: giant globs of plasma, or electrified gas, that drip from the Sun's outer atmosphere back to its surface. But she expected to find it in helmet streamers, the million-mile tall magnetic loops — named for their resemblance to a knight's pointy helmet — that can be seen protruding from the Sun during a solar eclipse. Computer simulations predicted the coronal rain could be found there.

Observations of the solar wind, the gas escaping from the Sun and out into space, hinted that the rain might be happening. And if she could just find it, the underlying rain-making physics would have major implications for the 70-year-old mystery of why the Sun's outer atmosphere, known as the corona, is so much hotter than its surface. But after nearly half a year of searching, Mason just couldn't find it. “It was a lot of looking,” Mason said, “for something that never ultimately happened.”

The problem, it turned out, wasn't what she was looking for, but where. In a paper published today in the Astrophysical Journal Letters, Mason and her coauthors describe the first observations of coronal rain in a smaller, previously overlooked kind of magnetic loop on the Sun. After a long, winding search in the wrong direction, the findings forge a new link between the anomalous heating of the corona and the source of the slow solar wind — two of the biggest mysteries facing solar science today.

How It Rains on the Sun

Observed through the high-resolution telescopes mounted on NASA's SDO spacecraft, the Sun – a hot ball of plasma, teeming with magnetic field lines traced by giant, fiery loops — seems to have few physical similarities with Earth. But our home planet provides a few useful guides in parsing the Sun's chaotic tumult: among them, rain.

On Earth, rain is just one part of the larger water cycle, an endless tug-of-war between the push of heat and pull of gravity. It begins when liquid water, pooled on the planet's surface in oceans, lakes, or streams, is heated by the Sun. Some of it evaporates and rises into the atmosphere, where it cools and condenses into clouds. Eventually, those clouds become heavy enough that gravity's pull becomes irresistible and the water falls back to Earth as rain, before the process starts anew.

On the Sun, Mason said, coronal rain works similarly, “but instead of 60-degree water you're dealing with a million-degree plasma.” Plasma, an electrically-charged gas, doesn't pool like water, but instead traces the magnetic loops that emerge from the Sun's surface like a rollercoaster on tracks.

At the loop's foot points, where it attaches to the Sun's surface, the plasma is superheated from a few thousand to over 1.8 million degrees Fahrenheit. It then expands up the loop and gathers at its peak, far from the heat source. As the plasma cools, it condenses and gravity lures it down the loop's legs as coronal rain.

Mason was looking for coronal rain in helmet streamers, but her motivation for looking there had more to do with this underlying heating and cooling cycle than the rain itself. Since at least the mid-1990s, scientists have known that helmet streamers are one source of the slow solar wind, a comparatively slow, dense stream of gas that escapes the Sun separately from its fast-moving counterpart.

But measurements of the slow solar wind gas revealed that it had once been heated to an extreme degree before cooling and escaping the Sun. The cyclical process of heating and cooling behind coronal rain, if it was happening inside the helmet streamers, would be one piece of the puzzle.

The other reason connects to the coronal heating problem — the mystery of how and why the Sun's outer atmosphere is some 300 times hotter than its surface. Strikingly, simulations have shown that coronal rain only forms when heat is applied to the very bottom of the loop. “If a loop has coronal rain on it, that means that the bottom 10% of it, or less, is where coronal heating is happening,” said Mason.

Raining loops provide a measuring rod, a cutoff point to determine where the corona gets heated. Starting their search in the largest loops they could find — giant helmet streamers — seemed like a modest goal, and one that would maximize their chances of success.

She had the best data for the job: Images taken by NASA's Solar Dynamics Observatory, or SDO, a spacecraft that has photographed the Sun every twelve seconds since its launch in 2010. But nearly half a year into the search, Mason still hadn't observed a single drop of rain in a helmet streamer. She had, however, noticed a slew of tiny magnetic structures, ones she wasn't familiar with. “They were really bright and they kept drawing my eye,” said Mason. “When I finally took a look at them, sure enough they had tens of hours of rain at a time.”

At first, Mason was so focused on her helmet streamer quest that she made nothing of the observations. “She came to group meeting and said, 'I never found it — I see it all the time in these other structures, but they're not helmet streamers,'” said Nicholeen Viall, a solar scientist at Goddard, and a coauthor of the paper. “And I said, 'Wait…hold on. Where do you see it? I don't think anybody's ever seen that before!'”

A Measuring Rod for Heating

These structures differed from helmet streamers in several ways. But the most striking thing about them was their size.

“These loops were much smaller than what we were looking for,” said Spiro Antiochos, who is also a solar physicist at Goddard and a coauthor of the paper. “So that tells you that the heating of the corona is much more localized than we were thinking.”

While the findings don't say exactly how the corona is heated, “they do push down the floor of where coronal heating could happen,” said Mason. She had found raining loops that were some 30,000 miles high, a mere two percent the height of some of the helmet streamers she was originally looking for. And the rain condenses the region where the key coronal heating can be happening. “We still don't know exactly what's heating the corona, but we know it has to happen in this layer,” said Mason.

A New Source for the Slow Solar Wind

But one part of the observations didn't jibe with previous theories. According to the current understanding, coronal rain only forms on closed loops, where the plasma can gather and cool without any means of escape. But as Mason sifted through the data, she found cases where rain was forming on open magnetic field lines. Anchored to the Sun at only one end, the other end of these open field lines fed out into space, and plasma there could escape into the solar wind. To explain the anomaly, Mason and the team developed an alternative explanation — one that connected rain on these tiny magnetic structures to the origins of the slow solar wind.

In the new explanation, the raining plasma begins its journey on a closed loop, but switches — through a process known as magnetic reconnection — to an open one. The phenomenon happens frequently on the Sun, when a closed loop bumps into an open field line and the system rewires itself. Suddenly, the superheated plasma on the closed loop finds itself on an open field line, like a train that has switched tracks. Some of that plasma will rapidly expand, cool down, and fall back to the Sun as coronal rain. But other parts of it will escape – forming, they suspect, one part of the slow solar wind.

Mason is currently working on a computer simulation of the new explanation, but she also hopes that soon-to-come observational evidence may confirm it. Now that Parker Solar Probe, launched in 2018, is traveling closer to the Sun than any spacecraft before it, it can fly through bursts of slow solar wind that can be traced back to the Sun — potentially, to one of Mason's coronal rain events. After observing coronal rain on an open field line, the outgoing plasma, escaping to the solar wind, would normally be lost to posterity. But no longer. “Potentially we can make that connection with Parker Solar Probe and say, that was it,” said Viall.

Digging Through the Data

As for finding coronal rain in helmet streamers? The search continues. The simulations are clear: the rain should be there. “Maybe it's so small you can't see it?” said Antiochos. “We really don't know.”

But then again, if Mason had found what she was looking for she might not have made the discovery — or have spent all that time learning the ins and outs of solar data.

“It sounds like a slog, but honestly it's my favorite thing,” said Mason. “I mean that's why we built something that takes that many images of the Sun: So we can look at them and figure it out.”