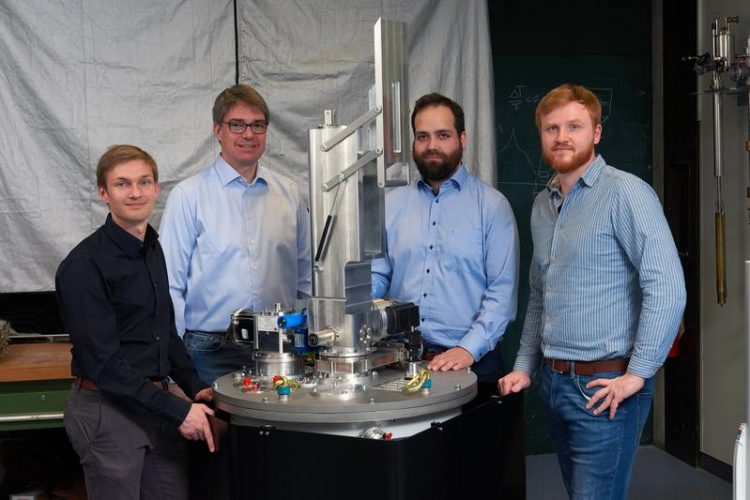 Low temperatures are essential for basic research in the field of quantum physics. More and more technologies based on quantum mechanics are now also making the leap from the laboratory to commercial applications.

TUM researchers Alexander Regnat, Jan Spallek, Tomek Schulz and Prof. Christian Pfleiderer are seeking to meet that demand. All four are currently working on their prototype at the TUM Physics Department. According to Alexander Regnat, there is already the prospect of taking on more staff and setting up separate headquarters.

The team of scientist came up with the idea during their work at the TUM. Again and again, they were faced with the limits of conventional methods for reaching such low temperatures. The group therefore developed its own technology to ensure permanent cooling and founded kiutra GmbH in the summer of 2018.

Liquefied gases are usually used to generate very low temperatures. Where constant temperatures close to absolute zero are needed, the extremely rare and expensive isotope helium-3 has to date been used. There are magnetic cooling processes, which can generate the requisite temperatures using inexpensive solids – but usually only for a limited period of time.

Concepts for permanent magnetic cooling have been around for many years. “However, technical implementation is extremely challenging and this has previously prevented the development of a product for widespread use,” explains Tomek Schulz.

“We are the world's first commercial supplier of a cooling system that can magnetically achieve temperatures close to absolute zero ( near -273°C) on a permanent basis,” says Alexander Regnat. “Our great advantage is that we do not need expensive helium-3. All we need is electricity.”

TUM creates more than 70 spin-offs every year. This project is a spin-off of the Physics Department and the team is currently in receipt of an EXIST start-up grant. The program helps students, graduates and scientists to launch their new businesses. kiutra also received validation support from the Free State of Bavaria in 2016 and 2017.

A few days ago, a consortium consisting of the lead investor High-Tech Gründerfonds (HTGF), Deep-Tech VC APEX Ventures and UnternehmerTUM Initiative for Industrial Innovators, invested a seven-figure sum in the TUM spin-off. The new capital will be used to further expand global sales and production capacity for the rapidly growing quantum technology market.