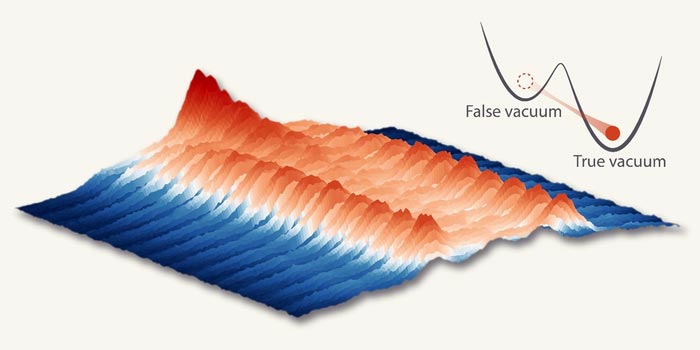 Measured momentum distribution of the shaken quantum gas during the phase transition. The central peak on the left corresponds to the initial Mott insulator while the two peaks on the right indicate the appearance of the distinct staggered order.
Credit: Bo Cheng

By shaking an optical lattice potential, researchers in Cambridge have realized a discontinuous phase transition in a strongly correlated quantum gas, opening the door to quantum simulations of false vacuum decay in the early universe.

Researchers in the University of Cambridge studied properties of quantum phases and their transitions using ultracold atoms in an optical lattice potential (formed by a set of standing wave lasers). Typically, the transition from a Mott insulator (MI) to a superfluid (SF), which is governed by the interplay of the atom-atom interactions and the hopping of atoms, is a continuous transition, where the system undergoes a smooth continuous change crossing the phase transition point.

However, many phase transitions are discontinuous, such as water freezing to ice, or the transition thought to have triggered the inflation period in the early universe. These are called ‘first-order transitions’ and for instance allow both phases to coexist – just like ice blocks in a glass of water – and can lead to hysteresis and metastability, where a system remains stuck in its original phase (the false vacuum) even though the ground state has changed.

By resonantly shaking the position of the lattice potential, the researchers could couple or “mix” the first two bands of the lattice. For the right parameters, this can excite the atoms from the lowest band into the first excited band, where they would form a new superfluid in which the atoms appear at the edge of the band (see figure). Crucially, the transition from the original Mott insulator in the lowest band to the resulting staggered superfluid in the excited band can be first-order (discontinuous), because the non-staggered order in the Mott insulator is incompatible with the staggered order of this superfluid – so the system has to choose one. The researchers could directly observe the metastability and hysteresis associated with this first-order transition by monitoring how fast one phase changes into another, or not. The findings are published in the journal Nature Physics.

“We realised a very flexible platform where phase transitions could be tuned from continuous to discontinuous by changing the shaking strength. This demonstration opens up new opportunities for exploring the role of quantum fluctuations in first-order phase transitions, for instance, the false vacuum decay in the early universe,” said first author Dr Bo Song from Cambridge’s Cavendish Laboratory. “It is really fascinating that we are on the road to cracking the mystery of the hot and dense early universe using such a cold and tiny atomic ensemble.”

“We are excited to enhance the scope of quantum simulators from condensed matter settings towards potential simulations of the early universe. While there clearly is a long way still to go, this work is an important first step,” added Professor Ulrich Schneider, who led the research at the Cavendish Laboratory. “This work also provides a testbed for exploring the spontaneous formation of spatial structures when a strongly interacting quantum system undergoes a discontinuous transition.”

“The underlying physics involves ideas that have a long history at the Cavendish, from Nevill Mott (on correlations) to Pyotr Kapitsa (on superfluidity), and even using shaking to effect dynamical control in a manner explained by Kapitsa but put to use in a way he would never have envisaged,” explained Professor Nigel Cooper, also from the Cavendish.