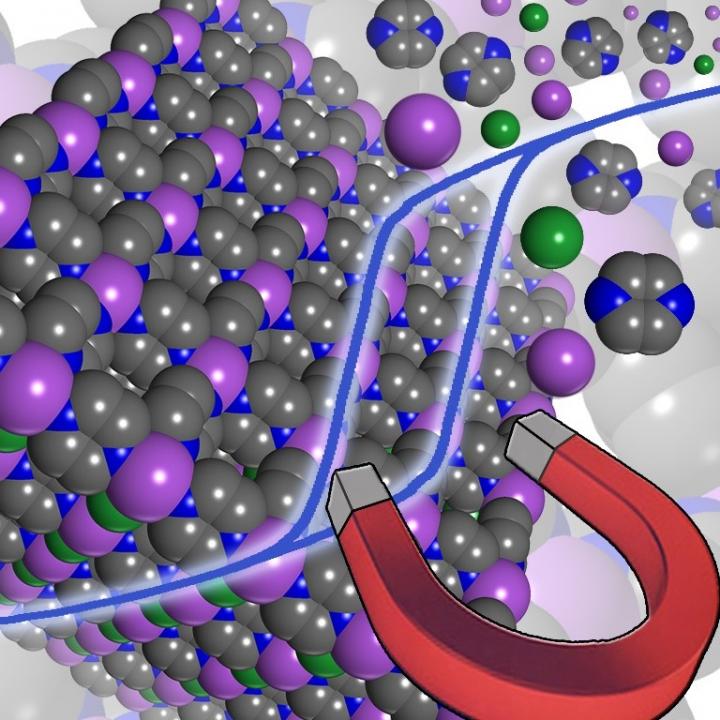 Pictorial representation of the molecule-based magnet and its magnetic properties.
Credit: Rodolphe Clérac

Magnets are to be found everywhere in our daily lives, whether in satellites, telephones or on fridge doors. However, they are made up of heavy inorganic materials whose component elements are, in some cases, of limited availability. Now, researchers from the CNRS, the University of Bordeaux and the ESRF (European Synchrotron Radiation Facility in Grenoble)* have developed a new lightweight molecule-based magnet, produced at low temperatures, and exhibiting unprecedented magnetic properties. This compound, derived from coordination chemistry**, contains chromium, an abundant metal, and inexpensive organic molecules. This is the first molecule-based magnet that exhibits a ‘memory effect’ (i.e. it is capable of maintaining one of its two magnetic states) up to a temperature of 240 °C. This effect is measured by what is known as a coercive field, which is 25 times higher at room temperature for this novel material than for the most efficient of its molecule-based predecessors. This property therefore compares well with that of certain purely inorganic commercial magnets. The discovery, published on 30th October in Science, opens up highly promising prospects, which could lead to next-generation magnets complementary to current systems.

** Coordination chemistry focuses on the combination of metals and ligands at the molecular level.