Home / Physics and Astronomy / The moiré patterns of three layers change the electronic properties of graphene
08.03.2019 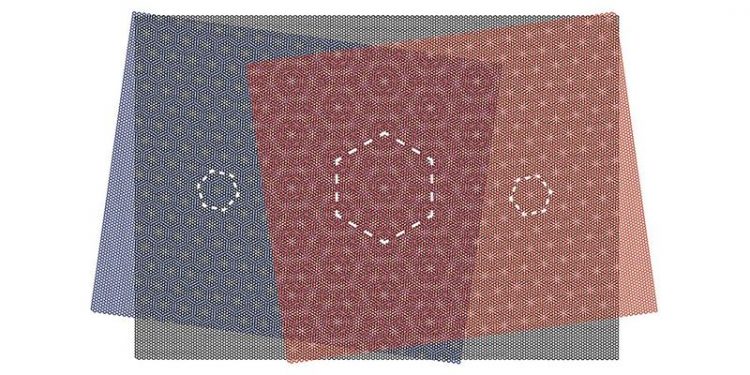 Last year, researchers in the US caused a big stir when they showed that rotating two stacked graphene layers by a “magical” angle of 1.1 degrees turns graphene superconducting – a striking example of how the combination of atomically thin materials can produce completely new electrical properties.

Scientists from the Swiss Nanoscience Institute and the Department of Physics at the University of Basel have now taken this concept one step further. They placed a layer of graphene between two boron nitride layers, which is often serves to protect the sensitive carbon structure. Doing so, they aligned the layers very precisely with the crystal lattice of the graphene.

The effect observed by the physicists in Professor Christian Schönenberger’s team is commonly known as a moiré pattern: when two regular patterns are superimposed, a new pattern results with a larger periodic lattice.

Lujun Wang, a member of the SNI PhD School and researcher in Schönenberger’s team, also observed effects of this kind of superlattice when he combined layers of boron nitride and graphene.

The atoms are arranged hexagonally in all layers. If they are stacked on top of each other, larger regular patterns emerge, with a size depending on the angle between the layers.

It had already been shown that this works with a two-layer combination of graphene and boron nitride, but the effects due to a second boron nitride layer had not yet been found.

When the physicists from Basel experimented with three layers, two superlattices were formed between the graphene and the upper and the lower boron nitride layer, respectively. The superposition of all three layers created an even larger superstructure than possible with only one layer.

Scientists are very interested in these types of synthetic materials, since the different moiré patterns can be used to change or artificially produce new electronic material properties.

“To put it simply, the atomic patterns determine the behavior of electrons in a material, and we are combining different naturally occurring patterns to create new synthetic materials,” explains Dr. Andreas Baumgartner, who supervised the project. “Now we have discovered effects in these tailor-made electronic devices that are consistent with a three-layer superstructure,” he adds.