The building blocks for exploring new exotic states of matter 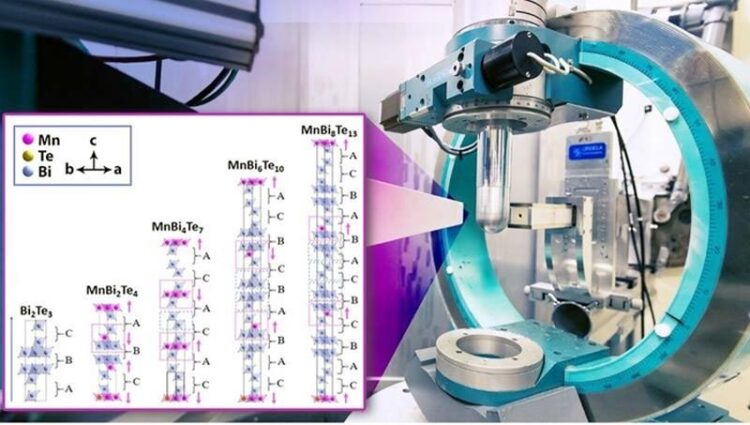 Researchers can use magnetic topological materials to realize exotic forms of matter that are not seen in other types of material. Scientists believe that the phenomena these materials exhibit could help advance quantum technology and increase the energy efficiency of future electronic devices. Researchers believe that a topological insulator that is inherently ferromagnetic, rather than gaining its properties by adding small numbers of magnetic atoms, is ideal for studying novel topological behaviors. This is because no external magnetic field is needed to study the material’s properties. It also means the material’s magnetism is more uniformly distributed. However, scientists have previously faced challenges in creating this kind of material. This new material consists of layers of manganese, bismuth, and tellurium atoms. It could provide opportunities for exploring novel phases of matter and developing new technologies. It also helps researchers study basic scientific questions about quantum materials.

The research team, led by scientists from the University of California, Los Angeles, developed the intrinsic ferromagnetic topological insulator by making a compound with alternating layers of MnBi2Te4 and Bi2Te3, bonded by weak interlayer forces of attraction between molecules. Scientists recently discovered that MnBi2Te4 is a naturally magnetic topological material. However, when layers of magnetic MnBi2Te4 are directly stacked on one another, the magnetic moments within neighboring layers point in opposite directions, making the material antiferromagnetic as a whole – losing the topological aspects of the properties that are important for technologies. The researchers solved this problem by making a new compound with three nonmagnetic layers of Bi2Te3 between layers of MnBi2Te4, which, combined, creates MnBi8Te13. This material design increases the distance between the MnBi2Te4 layers, which successfully eliminates the antiferromagnetic effect, leading to long-range ferromagnetism below 10.5 K with strong coupling between magnetism and charge carriers.

Important aspects of this research were neutron scattering experiments through the DEMAND instrument at the High Flux Isotope Reactor (HFIR) that pinpointed how atoms are arranged within the MnBi8Te13 material and confirmed its ferromagnetic state. Because neutrons have their own magnetic moment, they can be used to determine the magnetic structure inside a material. The scientists additionally used angle resolved photoemission spectroscopy experiments at the Stanford Synchrotron Radiation Lightsource, a Department of Energy user facility, and first-principles, density functional theory calculations to investigate the material’s electronic and topological state. Combining the assessments from all of these methods, the researchers were able to validate the ferromagnetic and topological properties consistent with an axion insulator with sizable surface hybridization gaps and a nontrivial Chern number.

The research was supported by the DOE Office of Science, Basic Energy Sciences, Materials Sciences and Engineering Division and the Scientific User Facilities Division, the National Science Foundation, the Indian Institute of Technology Kanpur, the Council for Scientific and Industrial Research in India, the Ministry of Science and Technology in Taiwan, the National Cheng Kung University, the National Center for Theoretical Sciences in Taiwan, and the Ministry of Education in Taiwan. Research was performed at three DOE Office of Science user facilities: the High Flux Isotope Reactor at Oak Ridge National Laboratory, the Stanford Synchrotron Radiation Lightsource at SLAC National Accelerator Laboratory, and the National Energy Research Scientific Computing Center at Lawrence Berkeley National Laboratory.