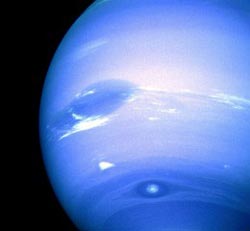 Image from the Voyager 2 flyby of Neptune in August 1989 (NASA). <br><br>In the middle is the Great Dark Spot, accompanied by bright, white clouds that undergo rapid changes in appearance. To the south of the Great Dark Spot is the bright feature that Voyager scientists nicknamed &quot;Scooter.&quot; Still farther south is the feature called &quot;Dark Spot 2,&quot; which has a bright core. As each feature moves eastward at a different velocity, they are rarely aligned this way. Wind velocities near the equator are westward, reaching 1,300 km/h, while those at higher latitudes are eastward, peaking at 900 km/h. <br>

These giants are home to extreme winds blowing at speeds of over 1,000 km/hour, hurricane-like storms as large around as Earth, immense weather systems that last for years, and fast-flowing jet streams. Both planets feature similar climates, despite the fact that Uranus is tipped on its side, with the pole facing the sun during winter.

The winds on these planets have been observed on their outer surfaces; however, to get a grasp of their weather systems, we need to have an idea of what’s going on underneath. For instance, do the atmospheric patterns arise from deep down in the planet, or are they confined to shallower processes nearer the surface? New research from the Weizmann Institute of Science, the University of Arizona, and Tel Aviv University, which was published online Thursday in Nature, shows that the wind patterns seen on the surface can extend only so far down on these two worlds.

Understanding the atmospheric circulation is not simple for a planet without a solid surface, where Earth-style boundaries between solid, liquid, and gas layers do not exist. Since their discovery in the 1980s by the Voyager 2 spacecraft, the vertical extent of these strong atmospheric winds has been a major puzzle – one that influences our understanding of the physics governing the atmospheric dynamics and internal structure of these planets. But a team led by Dr. Yohai Kaspi of the Weizmann Institute’s Department of Environmental Sciences and Energy Research realized they had a way, based on a novel method for analyzing the planets’ gravitational fields, to determine an upper limit for the thickness of the atmospheric layer.

Deviations in the distribution of mass in planets cause measurable fluctuations in the gravitational field. On Earth, for example, an airplane flying near a large mountain feels the slight extra gravitational pull of that mountain. Like Earth, the giant planets of the solar system are rapidly rotating bodies. In fact, all of them rotate faster than Earth; the rotation periods of Uranus and Neptune are about 17 and 16 hours, respectively. Because of this rapid rotation, the winds swirl around regions of high and low pressure. (In a non-rotating body, flow would be from high to low pressure.) This lets researchers deduce the relations between the distribution of pressure and density, and the planets’ wind field. These physical principles enabled Dr. Kaspi and his co-authors to calculate, for the first time, the gravity signature of the wind patterns and, thus, create a wind-induced gravity map of these planets.

By computing the gravitational fields of a large range of ideal planet models (meaning ones with no wind) – a task conducted by team member Dr. Ravit Helled of Tel Aviv University – and comparing them with the observed gravitational fields, upper limits to the meteorological contribution to the gravitational fields were obtained. This enabled Dr. Kaspi’s team, which included Profs. Adam Showman and Bill Hubbard of the University of Arizona and Prof. Oded Aharonson of the Weizmann Institute, to show that the streams of gas observed in the atmosphere are limited to a “weather-layer” of no more than about 1,000 km in depth, which makes up only a fraction of a percent of the mass of these planets.

Although no spacecraft missions to Uranus and Neptune are planned for the near future, Dr. Kaspi anticipates that the team’s findings will be useful in the analysis of another set of atmospheric circulation patterns that will be closely observed soon: those of Jupiter. Dr. Kaspi, Dr. Helled, and Prof. Hubbard are part of the science team for NASA’s Juno spacecraft to Jupiter. Juno was launched in 2011; upon reaching Jupiter in 2016 it will provide very accurate measurements of the gravity field of that giant, gaseous planet. By using the same methods as the present study, Dr. Kaspi anticipates that the team will be able to obtain the same type of information they acquired for Uranus and Neptune, placing constraints on the depth of the atmospheric dynamics of this planet.

Uranus and Neptune are the farthest planets in the solar system, and there are still many open questions regarding their formation and composition. This study has implications for revealing the mysteries of their deep, dark interiors, and may even provide information about how these planets were formed. Moreover, many of the extrasolar planets detected around other stars have been found to have masses similar to those of Uranus and Neptune, so this research will be important for understanding like-sized extrasolar planets, as well.

Prof. Oded Aharonson’s research is supported by the Helen Kimmel Center for Planetary Science, which he heads; the J & R Center for Scientific Research; and the estate of Joseph and Erna Lazard.

Weizmann Institute of Science in Rehovot, Israel, is one of the world’s top-ranking multidisciplinary research institutions. Noted for its wide-ranging exploration of the natural and exact sciences, the Institute is home to 2,700 scientists, students, technicians, and supporting staff. Institute research efforts include the search for new ways of fighting disease and hunger, examining leading questions in mathematics and computer science, probing the physics of matter and the universe, creating novel materials, and developing new strategies for protecting the environment.