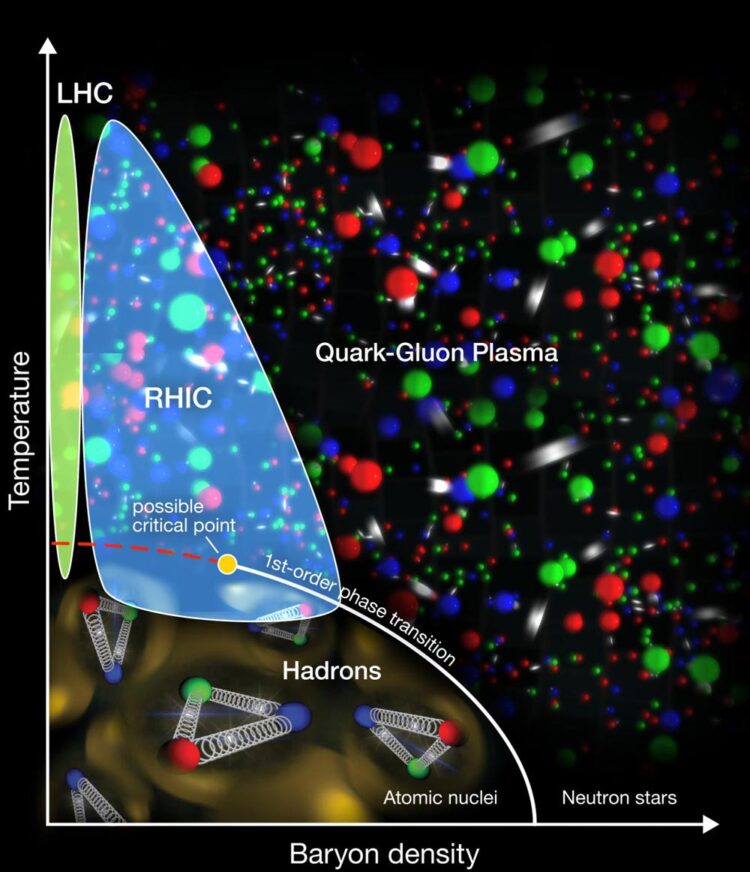 Fluctuations in net proton production hint at a possible ‘critical point’ marking a change in the way nuclear matter transforms from one phase to another.

Physicists studying collisions of gold ions at the Relativistic Heavy Ion Collider (RHIC), a U.S. Department of Energy Office of Science user facility for nuclear physics research at DOE’s Brookhaven National Laboratory, are embarking on a journey through the phases of nuclear matter—the stuff that makes up the nuclei of all the visible matter in our universe.

A new analysis of collisions conducted at different energies shows tantalizing signs of a critical point—a change in the way that quarks and gluons, the building blocks of protons and neutrons, transform from one phase to another. The findings, just published by RHIC’s STAR Collaboration in the journal Physical Review Letters, will help physicists map out details of these nuclear phase changes to better understand the evolution of the universe and the conditions in the cores of neutron stars.

“If we are able to discover this critical point, then our map of nuclear phases—the nuclear phase diagram—may find a place in the textbooks, alongside that of water,” said Bedanga Mohanty of India’s National Institute of Science and Research, one of hundreds of physicists collaborating on research at RHIC using the sophisticated STAR detector.

As Mohanty noted, studying nuclear phases is somewhat like learning about the solid, liquid, and gaseous forms of water, and mapping out how the transitions take place depending on conditions like temperature and pressure. But with nuclear matter, you can’t just set a pot on the stove and watch it boil. You need powerful particle accelerators like RHIC to turn up the heat.

RHIC’s highest collision energies “melt” ordinary nuclear matter (atomic nuclei made of protons and neutrons) to create an exotic phase called a quark-gluon plasma (QGP). Scientists believe the entire universe existed as QGP a fraction of a second after the Big Bang—before it cooled and the quarks bound together (glued by gluons) to form protons, neutrons, and eventually, atomic nuclei. But the tiny drops of QGP created at RHIC measure a mere 10-13 centimeters across (that’s 0.0000000000001 cm) and they last for only 10-23 seconds! That makes it incredibly challenging to map out the melting and freezing of the matter that makes up our world.

“Strictly speaking if we don’t identify either the phase boundary or the critical point, we really can’t put this [QGP phase] into the textbooks and say that we have a new state of matter,” said Nu Xu, a STAR physicist at DOE’s Lawrence Berkeley National Laboratory.

To track the transitions, STAR physicists took advantage of the incredible versatility of RHIC to collide gold ions (the nuclei of gold atoms) across a wide range of energies.

“RHIC is the only facility that can do this, providing beams from 200 billion electron volts (GeV) all the way down to 3 GeV. Nobody can dream of such an excellent machine,” Xu said.

The changes in energy turn the collision temperature up and down and also vary a quantity known as net baryon density that is somewhat analogous to pressure. Looking at data collected during the first phase of RHIC’s “beam energy scan” from 2010 to 2017, STAR physicists tracked particles streaming out at each collision energy. They performed a detailed statistical analysis of the net number of protons produced. A number of theorists had predicted that this quantity would show large event-by-event fluctuations as the critical point is approached.

The reason for the expected fluctuations comes from a theoretical understanding of the force that governs quarks and gluons. That theory, known as quantum chromodynamics, suggests that the transition from normal nuclear matter (“hadronic” protons and neutrons) to QGP can take place in two different ways. At high temperatures, where protons and anti-protons are produced in pairs and the net baryon density is close to zero, physicists have evidence of a smooth crossover between the phases. It’s as if protons gradually melt to form QGP, like butter gradually melting on a counter on a warm day. But at lower energies, they expect what’s called a first-order phase transition—an abrupt change like water boiling at a set temperature as individual molecules escape the pot to become steam. Nuclear theorists predict that in the QGP-to-hadronic-matter phase transition, net proton production should vary dramatically as collisions approach this switchover point.

“At high energy, there is only one phase. The system is more or less invariant, normal,” Xu said. “But when we change from high energy to low energy, you also increase the net baryon density, and the structure of matter may change as you are going through the phase transition area.

“It’s just like when you ride an airplane and you get into turbulence,” he added. “You see the fluctuation—boom, boom, boom. Then, when you pass the turbulence—the phase of structural changes—you are back to normal into the one-phase structure.”

In the RHIC collision data, the signs of this turbulence are not as apparent as food and drinks bouncing off tray tables in an airplane. STAR physicists had to perform what’s known as “higher order correlation function” statistical analysis of the distributions of particles—looking for more than just the mean and width of the curve representing the data to things like how asymmetrical and skewed that distribution is.

The oscillations they see in these higher orders, particularly the skew (or kurtosis), are reminiscent of another famous phase change observed when transparent liquid carbon dioxide suddenly becomes cloudy when heated, the scientists say. This “critical opalescence” comes from dramatic fluctuations in the density of the CO2—variations in how tightly packed the molecules are.

“In our data, the oscillations signify that something interesting is happening, like the opalescence,” Mohanty said.

Yet despite the tantalizing hints, the STAR scientists acknowledge that the range of uncertainty in their measurements is still large. The team hopes to narrow that uncertainty to nail their critical point discovery by analyzing a second set of measurements made from many more collisions during phase II of RHIC’s beam energy scan, from 2019 through 2021.

The entire STAR collaboration was involved in the analysis, Xu notes, with a particular group of physicists—including Xiaofeng Luo (and his student, Yu Zhang), Ashish Pandav, and Toshihiro Nonaka, from China, India, and Japan, respectively—meeting weekly with the U.S. scientists (over many time zones and virtual networks) to discuss and refine the results. The work is also a true collaboration of the experimentalists with nuclear theorists around the world and the accelerator physicists at RHIC. The latter group, in Brookhaven Lab’s Collider-Accelerator Department, devised ways to run RHIC far below its design energy while also maximizing collision rates to enable the collection of the necessary data at low collision energies.

“We are exploring uncharted territory,” Xu said. “This has never been done before. We made lots of efforts to control the environment and make corrections, and we are eagerly awaiting the next round of higher statistical data,” he said.

This study was supported by the DOE Office of Science, the U.S. National Science Foundation, and a wide range of international funding agencies listed in the paper. RHIC operations are funded by the DOE Office of Science. Data analysis was performed using computing resources at the RHIC and ATLAS Computing Facility (RACF) at Brookhaven Lab, the National Energy Research Scientific Computing Center (NERSC) at Lawrence Berkeley National Laboratory, and via the Open Science Grid consortium.

Brookhaven National Laboratory is supported by the U.S. Department of Energy’s Office of Science. The Office of Science is the single largest supporter of basic research in the physical sciences in the United States and is working to address some of the most pressing challenges of our time. For more information, visit https://energy.gov/science.