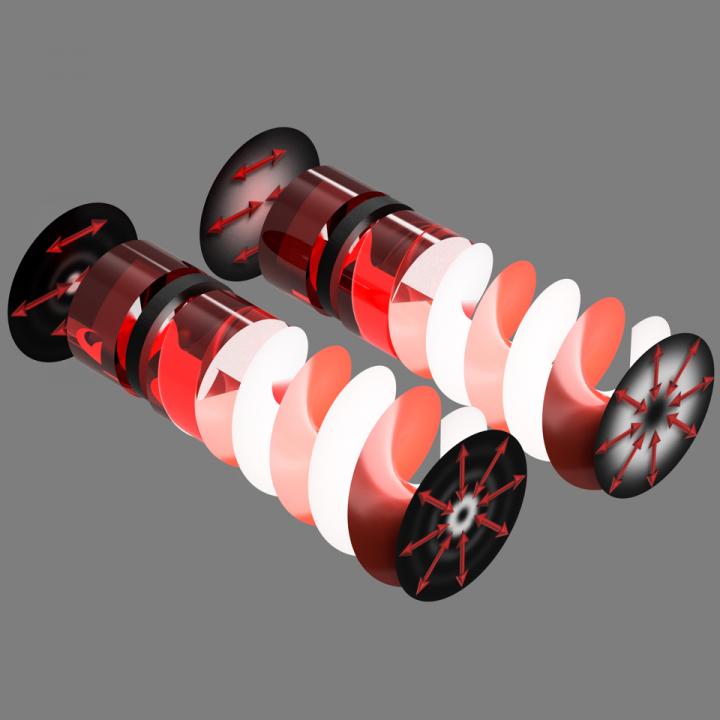 Quantum mechanics has come a long way during the past 100 years but still has a long way to go. In AVS Quantum Science, researchers from the University of Witwatersrand in South Africa review the progress being made in using structured light in quantum protocols to create a larger encoding alphabet, stronger security and better resistance to noise. This image shows the creation of hybrid entangled photons by combining polarization with a "twisted" pattern that carries orbital angular momentum. Credit: Forbes and Nape

Structured light is a fancy way to describe patterns or pictures of light, but deservedly so as it promises future communications that will be both faster and more secure.

Quantum mechanics has come a long way during the past 100 years but still has a long way to go. In AVS Quantum Science, from AIP Publishing, researchers from the University of Witwatersrand in South Africa review the progress being made in using structured light in quantum protocols to create a larger encoding alphabet, stronger security and better resistance to noise.

“What we really want is to do quantum mechanics with patterns of light,” said author Andrew Forbes. “By this, we mean that light comes in a variety of patterns that can be made unique — like our faces.”

Since patterns of light can be distinguished from each other, they can be used as a form of alphabet. “The cool thing is that there are, in principle at least, an infinite set of patterns, so an infinite alphabet is available,” he said.

Traditionally, quantum protocols have been implemented with the polarization of light, which has only two values — a two-level system with a maximum information capacity per photon of just 1 bit. But by using patterns of light as the alphabet, the information capacity is much higher. Also, its security is stronger, and the robustness to noise (such as background light fluctuations) is improved.

“Patterns of light are a route to what we term high-dimensional states,” Forbes said. “They're high dimensional, because many patterns are involved in the quantum process. Unfortunately, the toolkit to manage these patterns is still underdeveloped and requires a lot of work.”

The quantum science community has made many recent noteworthy advances, both in the science and derived technologies. For example, entanglement swapping has now been demonstrated with spatial modes of light, a core ingredient in a quantum repeater, while the means to securely communicate between nodes is now possible through high-dimensional quantum key distribution protocols. Together they bring us a little bit closer to a fast and secure quantum network.

In a similar vein, the construction of exotic multiparty high-dimensional states for quantum computer has been realized, as has enhanced resolution in ghost imaging (produced by combining light from two light detectors). Yet it remains challenging to break beyond the ubiquitous two photons in two dimensions for full control of multiple photons entangled in high dimensions.

“We know how to create and detect photons entangled in patterns,” said Forbes. “But we don't really have good control on getting them from one point to another, because they distort in the atmosphere and in optical fiber. And we don't really know how to efficiently extract information from them. It requires too many measurements at the moment.”

Forbes and his co-author Isaac Nape helped pioneer the use of hybrid states — another big advance. Old textbook quantum mechanics was done with polarization.

“It turns out that many protocols can be efficiently implemented with simpler tools by combining patterns with polarization for the best of both worlds,” Forbes said. “Rather than two dimensions of patterns, hybrid states allow access to multidimensional states, for example, an infinite set of two-dimensional systems. This looks like a promising way forward to truly realize a quantum network based on patterns of light.”

AVS Quantum Science, co-published by AIP Publishing and AVS, is a truly intradisciplinary journal that reaches from its foundations in quantum science into a breadth of areas from condensed matter and atomic, molecular and optical physics, to biology, chemistry, and materials science, as well as computer science and engineering. The journal places a strong emphasis on focused and comprehensive reviews and features perspectives and original research. See https://avs.scitation.org/journal/aqs.

AVS is an interdisciplinary, professional society with some 4,500 members worldwide. Founded in 1953, AVS hosts local and international meetings, publishes four journals, serves members through awards, training and career services programs and supports networking among academic, industrial, government, and consulting professionals. Its members come from across the fields of chemistry, physics, biology, mathematics, engineering and business and share a common interest in basic science, technology development and commercialization related to materials, interfaces, and processing. https://www.avs.org