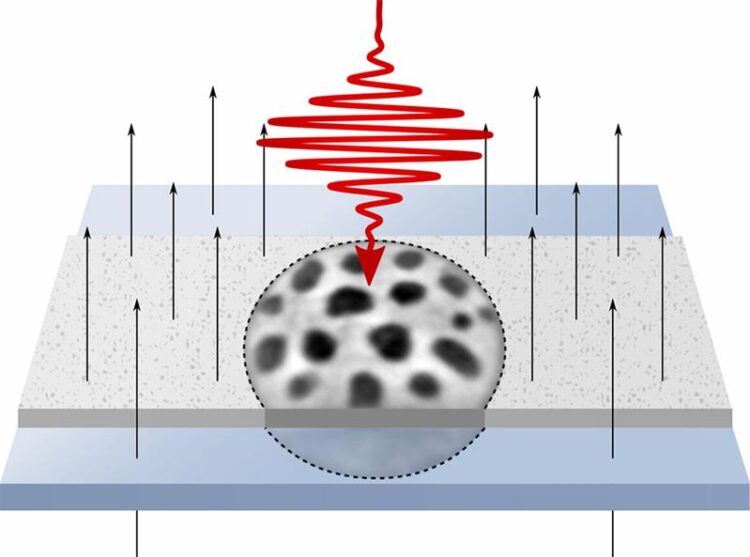 Fig. 1: A single laser pulse of appropriate intensity can create random skyrmion patterns with a density defined by an external magnetic field (thin arrows). This scheme of laser writing of skyrmions may be used as an ultrafast "skyrmion reshuffler" for stochastic computing. The area surrounded by the dashed line marks the field of view of the x-ray microscope used to see the magnetic skyrmions appearing as black dots. The field of view is 1 μm in diameter.
Credit: MBI

Smaller, faster, more energy-efficient: future requirements to computing and data storage are hard to fulfill and alternative concepts are continuously explored. Small magnetic textures, so-called skyrmions, may become an ingredient in novel memory and logic devices. In order to be considered for technological application, however, fast and energy-efficient control of these nanometer-sized skyrmions is required.

Magnetic skyrmions are particle-like magnetization patches that form as very small swirls in an otherwise uniformly magnetized material. In particular ferromagnetic thin films, skyrmions are stable at room temperature, with diameters down to the ten-nanometer range. It is known that skyrmions can be created and moved by short pulses of electric current. Only recently it was discovered that also short laser pulses are able to create and annihilate skyrmions.

In contrast to electric current pulses, laser pulses of sub-picosecond duration can be used, providing a faster and potentially more energy-efficient route to write and delete information encoded by skyrmions. This makes laser skyrmion writing interesting for technological applications, including alternative memory and logic devices.

Scientists of Max Born Institute together with colleagues from Helmholtz-Zentrum Berlin, Massachusetts Institute of Technology and further research institutions now investigated in detail how laser-based creation and annihilation of skyrmions can be controlled to promote application of the process in devices. To image the magnetic skyrmions, the team of researchers used holography-based x-ray microscopy, which can make the tiny magnetization swirls with a diameter of 100 nanometer and less visible. Being able to see the skyrmions, they were able to systematically study how laser pulses with different intensity, applied in the presence of an external magnetic field, can create or delete skyrmions. Two types of material systems, designed to be able to host magnetic skyrmions in the first place, were investigated, both consisting of ultrathin multilayer stacks of ferromagnetic and paramagnetic materials.

Not surprisingly given the thermal nature of the process, the laser intensity has to be right. However, there is a material-dependent window of laser intensities which allows for the creation of a new skyrmion pattern which is completely independent of the previous magnetic state. For lower intensities, an existing pattern remains unaltered or is only slightly modified, for much higher intensities, the multilayer structure is damaged. Remarkably, the number of skyrmions created within the laser spot is not influenced by the laser intensity. Instead, the researchers found that the presence of an external magnetic field allows to precisely control the density of skyrmions created. The strength of the external field therefore provides a knob to tune the number of skyrmions created and even allows for annihilation of skyrmions, as the scientists report in the journal Applied Physics Letters.

They demonstrated the controlled creation or annihilation of single skyrmions within the laser spot, as required for applications in data storage where a single bit could then be represented by the presence or absence of a skyrmion. Of interest for potential device application, however, is also the ability to simultaneously generate a particular density of skyrmions in the area illuminated by a single laser pulse. This process could be used as a “skyrmion reshuffler” in stochastic computing. There, numbers are represented as strings of random bits of “0” and “1”, with the probability to encounter “1” encoding the number value. Computations can then be carried out via logic operations between individual bits of different input numbers. While clearly a niche approach compared to the prevalent digital logic, stochastic computing has proven promising for particular problems such as image processing. However, completely randomized bit strings are needed as input signals for correct results of stochastic computing operations. As demonstrated in this work, such randomizing “reshuffling” of skyrmions can be performed optically on a timescale of picoseconds, compatible with state-of-the-art computer clock speed and much faster than in previous concepts based on thermal diffusion operating on the timescale of seconds.