Home / Physics and Astronomy / Researchers watch the dynamics of plasmonic skyrmions made from light on ultra-smooth gold platelets for the first time
24.04.2020 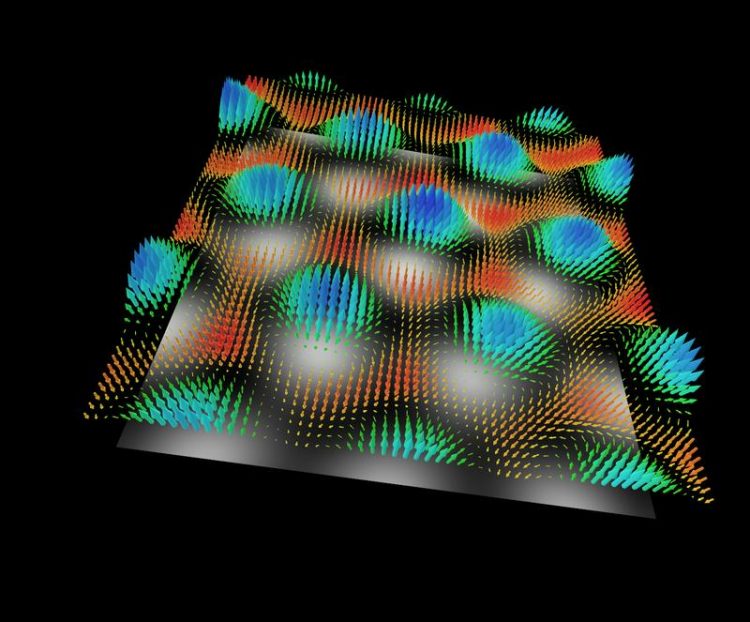 Snapshot of the nanofilm that displays the electric field of light in the plasmonic nanovortices (skyrmions). The hexagonal (6-fold) symmetry in the plane is easily visible. Universities of Stuttgart, Duisburg-Essen and Melbourne

When a figure skater starts to perform a pirouette and raises her arms, she turns around her own axis increasingly faster due to the conservation of angular momentum. On hot summer days, the same pirouette effect creates the so-called “dust devils” over harvested fields, i.e., small whirlwinds of hot air, and it also gives large tornadoes their destructive power.

The physicist Tony Skyrme studied such vortices in detail in the 1960s in a field of research called topology. The patterns are called “skyrmions” after their discoverer.

Therefore, no one has yet been able to measure the exact orientation of these vortices. It was also impossible to look at the vortex dynamics, because the time it takes light to travel once around such a vortex is only a few femtoseconds (trillionths of a millisecond).

The researchers were able to record the direction of the electric and magnetic field of the light in all three dimensions and even measured its dynamics. Theorist Tim Davis from Melbourne, who visited Stuttgart and Duisburg with support of the IQST quantum center, calculated the required light wavelengths, the optimal shape of the nanostructures, as well as the exact thickness of the gold platelets. He predicted how regular arrays (called skyrmion lattices) of light vortices would behave.

Bettina Frank from the research group of Harald Giessen at the 4th Physics Institute at the University of Stuttgart succeeded in producing atomically smooth gold platelets with adjustable thickness in the nanometer range using a newly developed method. Extremely flat silicon wafers, as known from microchip production, were used as substrate for this purpose.

The gold platelets were nanostructured with a high-precision gold ion beam. When irradiated with laser pulses of a carefully calculated wavelength in the infrared range, entire skyrmion arrays of light, so-called plasmonic skyrmions, could be created.

The measurement of the vector dynamics, i.e., the three-dimensional alignment of the plasmon light fields and their temporal behavior, was successfully carried out in a specifically designed new experiment in the world's leading group of Frank Meyer zu Heringdorf at the University of Duisburg-Essen.

Doctoral students Pascal Dreher and David Janoschka sent laser pulses of only 13 femtoseconds pulse duration at 800 nm wavelength onto the gold platelets with the nanostructures from Stuttgart.

The photoeffect, for which Einstein received his Nobel Prize, causes electrons to be ejected out of the gold sample, which are then measured in an electron microscope. By smartly combining several laser pulses with different light polarizations and repeating the experiment several times, the different vector components of the light fields can now be determined by projection.

By sending two laser pulses one after another onto the sample, the nanotornadoes of light can both be excited and subsequently probed by ultrashort laser pulses, so that within the duration of about one night, an entire nanofilm of these light vortices can be recorded.

Harald Giessen from Stuttgart believes that it might be possible in the future on the basis of this research to create new types of microscopes which could produce much smaller structures with light than has been the case so far.

“The combination of the orbital angular momentum and the vector properties leads to plasmonic vortex structures in the nanometer range even with linear optics,” he reports.

“It will also be possible to experimentally observe time-resolved skyrmion physics under a variety of boundary conditions”. The interaction of such skyrmion fields and their orbital angular momentum with neighboring particles in semiconductors, for example in atomically thin, two-dimensional materials, will be particularly exciting.

“Thanks to our new Raith ion-beam lithography machine, we have almost infinite possibilities for generating different topological nanostructures and studying their skyrmion dynamics with the Duisburg nanocamera”.