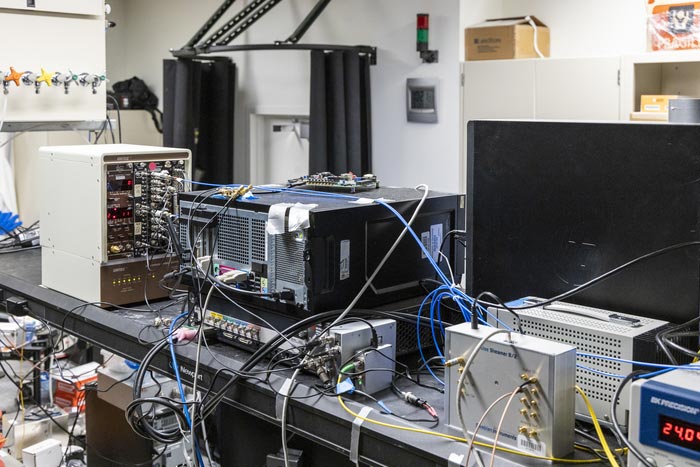 The third and final node used in the experiment is located in the Charlie laboratory.
Credit: Carlos Jones/ORNL, U.S. Dept. of Energy

This network exemplifies how experts might routinely connect quantum computers and sensors at a practical scale, thereby realizing the full potential of these next-generation technologies on the path toward the highly anticipated quantum internet. The team’s results, which are published in PRX Quantum, mark the culmination of years of related research.

Local area networks that connect classical computing devices are nothing new, and QLANs have been successfully tested in tabletop studies. Quantum key distribution has been the most common example of quantum communications in the field thus far, but this procedure is limited because it only establishes security, not entanglement, between sites.

“We’re trying to lay a foundation upon which we can build a quantum internet by understanding critical functions, such as entanglement distribution bandwidth,” said Nicholas Peters, the Quantum Information Science section head at ORNL. “Our goal is to develop the fundamental tools and building blocks we need to demonstrate quantum networking applications so that they can be deployed in real networks to realize quantum advantages.”

When two photons — particles of light — are paired together, or entangled, they exhibit quantum correlations that are stronger than those possible with any classical method, regardless of the physical distance between them. These interactions enable counterintuitive quantum communications protocols that can only be achieved using quantum resources.

One such protocol, remote state preparation, harnesses entanglement and classical communications to encode information by measuring one half of an entangled photon pair and effectively converting the other half to the preferred quantum state. Peters led the first general experimental realization of remote state preparation in 2005 while earning his doctorate in physics. The team applied this technique across all the paired links in the QLAN — a feat not previously accomplished on a network — and demonstrated the scalability of entanglement-based quantum communications.

This approach allowed the team to link together three remote nodes, known as “Alice,” “Bob” and “Charlie” — names commonly used for fictional characters who can communicate through quantum transmissions — located in three different research laboratories in three separate buildings on ORNL’s campus. From the laboratory containing Alice and the photon source, the photons distributed entanglement to Bob and Charlie through ORNL’s existing fiber-optic infrastructure.

Quantum networks are incompatible with amplifiers and other classical signal boosting resources, which interfere with the quantum correlations shared by entangled photons. With this potential drawback in mind, the team incorporated flexible grid bandwidth provisioning, which uses wavelength-selective switches to allocate and reallocate quantum resources to network users without disconnecting the QLAN. This technique provides a type of built-in fault tolerance through which network operators can respond to an unanticipated event, such as a broken fiber, by rerouting traffic to other areas without disrupting the network’s speed or compromising security protocols.

“Because the demand in a network might change over time or with different configurations, you don’t want to have a system with fixed wavelength channels that always assigns particular users the same portions,” said Joseph Lukens, a Wigner Fellow and research scientist at ORNL as well as the team’s electrical engineering expert. “Instead, you want the flexibility to provide more or less bandwidth to users on the network according to their needs.”

Compared with their typical classical counterparts, quantum networks need the timing of each node’s activity to be much more closely synchronized. To meet this requirement, the researchers relied on GPS, the same versatile and cost-effective technology that uses satellite data to provide everyday navigation services. Using a GPS antenna located in Bob’s laboratory, the team shared the signal with each node to ensure that the GPS-based clocks were synchronized within a few nanoseconds and that they would not drift apart during the experiment.

Having obtained precise timestamps for the arrival of entangled photons captured by photon detectors, the team sent these measurements from the QLAN to a classical network, where they compiled high-quality data from all three laboratories.

“This part of the project became a challenging classical networking experiment with very tight tolerances,” Lukens said. “Timing on a classical network rarely requires that level of precision or that much attention to detail regarding the coding and synchronization between the different laboratories.”

Without the GPS signal, the QLAN demonstration would have generated lower quality data and lowered fidelity, a mathematical metric tied to quantum network performance that measures the distance between quantum states.

The team anticipates that small upgrades to the QLAN, including adding more nodes and nesting wavelength-selective switches together, would form quantum versions of interconnected networks — the literal definition of the internet.

“The internet is a large network made up of many smaller networks,” said Muneer Alshowkan, a postdoctoral research associate at ORNL who brought valuable computer science expertise to the project. “The next big step toward the development of a quantum internet is to connect the QLAN to other quantum networks.”

Additionally, the team’s findings could be applied to improve other detection techniques, such as those used to seek evidence of elusive dark matter, the invisible substance thought to be the universe’s predominant source of matter.

“Imagine building networks of quantum sensors with the ability to see fundamental high-energy physics effects,” Peters said. “By developing this technology, we aim to lower the sensitivity needed to measure those phenomena to assist in the ongoing search for dark matter and other efforts to better understand the universe.”

The researchers are already planning their next experiment, which will focus on implementing even more advanced timing synchronization methods to reduce the number of accidentals — the sources of noise in the network — and further improve the QLAN’s quality of service.

This work was funded by the DOE Office of Science through the Early Career Research Program, the Transparent Optical Quantum Networks for Distributed Science Program, and the Basic Energy Sciences program’s Materials Sciences and Engineering Division. Additional support was provided by the Intelligence Community Postdoctoral Research Fellowship Program at ORNL and the Quantum Information Science and Engineering Network through the National Science Foundation.

UT-Battelle manages ORNL for DOE’s Office of Science, the single largest supporter of basic research in the physical sciences in the United States. DOE’s Office of Science is working to address some of the most pressing challenges of our time. For more information, visit https://energy.gov/science.— Elizabeth Rosenthal