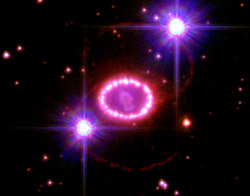 A String of 'Cosmic Pearls' Surrounds an Exploding Star Two decades ago, astronomers spotted one of the brightest exploding stars in more than 400 years. Since that first sighting, the doomed star, called Supernova 1987A, has continued to fascinate astronomers with its spectacular light show. The NASA/ESA Hubble Space Telescope is one of many observatories that has been monitoring the blast's aftermath. This image shows the entire region around the supernova. The most prominent feature in the image is a ring with dozens of bright spots. A shock wave of material unleashed by the stellar blast is slamming into regions along the ring's inner regions, heating them up, and causing them to glow. The ring, about a light-year across, was probably shed by the star about 20,000 years before it exploded. Astronomers detected the first bright spot in 1997, but now they see dozens of spots around the ring. Only Hubble can see the individual bright spots. In the next few years, the entire ring will be ablaze as it absorbs the full force of the crash. The glowing ring is expected to become bright enough to illuminate the star's surroundings, providing astronomers with new information on how the star expelled material before the explosion. The pink object in the center of the ring is debris from the supernova blast. The glowing debris is being heated by radioactive elements, principally titanium 44, created in the explosion. The debris will continue to glow for many decades. The origin of a pair of faint outer red rings, located above and below the doomed star, is a mystery. The two bright objects that look like car headlights are a pair of stars in the Large Magellanic Cloud. The supernova is located 163,000 light-years away in the Large Magellanic Cloud. The image was taken in December 2006 with Hubble's Advanced Camera for Surveys. Credit: NASA, ESA, and R. Kirshner (Harvard-Smithsonian Center for Astrophysics)

Observations of SN 1987A, made over the past 20 years by the NASA/ESA Hubble Space Telescope and many other major ground- and space-based telescopes, have significantly changed astronomers’ views of how massive stars end their lives. Astronomers credit Hubble’s sharp vision with yielding important clues about the massive star’s demise.

“The sharp pictures from the Hubble telescope help us ask and answer new questions about Supernova 1987A,” said Robert Kirshner, of the Harvard-Smithsonian Center for Astrophysics in Cambridge, Mass. “In fact, without Hubble we wouldn’t even know what to ask.”

Kirshner is the lead investigator of an international collaboration to study the doomed star. Studying supernovae like SN 1987A is important because the exploding stars create elements, such as carbon and iron, that make up new stars, galaxies, and even humans. The iron in a person’s blood, for example, was manufactured in supernova explosions. SN 1987A ejected 20,000 Earth masses of radioactive iron. The core of the shredded star is now glowing because of radioactive titanium that was cooked up in the explosion.

Kirshner has used the Hubble telescope to monitor the supernova. “The Hubble observations have helped us rewrite the textbooks on exploding stars. We found that the actual world is more complicated and interesting than anyone dared to imagine. There are mysterious triple rings of glowing gas and powerful blasts sent out from the explosion that are just having an impact now, 20 years later.”

Before SN 1987A, astronomers had a “simplified, idealized model of a supernova,” Kirshner explained. “We thought the explosions were spherical and we didn't think much about the gas a star would exhale in the thousands of years before it exploded. The actual shreds of the star in SN 1987A are elongated — more like a jellybean than a gumball, and the fastest-moving debris is slamming into the gas that was already out there from previous millennia. Who would have guessed?”

Hubble wasn’t even around when astronomers first spotted the supernova in 1987. When Hubble was launched three years later, astronomers didn't waste any time in using the telescope to study the stellar blast. Its first peek was in 1990, the year the observatory launched. Since then, the telescope has taken hundreds of pictures of the doomed star.

The Hubble studies have revealed the following details about the supernova:

– A glowing ring, about a light-year in diameter, around the supernova. The ring was there at least 20,000 years before the star exploded. X-rays from the explosion energized the gas in the ring, making it glow for two decades.

– Two outer loops of glowing gas that had not been identified in ground-based telescope images.

– A dumbbell-shaped central structure that has now grown to one-tenth of a light-year long. The structure consists of two blobs of debris in the centre of the supernova racing away from each other at roughly 30 million kilometres an hour.

– The onrushing stellar shock wave from the stellar explosion is slamming into, heating up, and illuminating the inner regions of the narrow ring surrounding the doomed star.

Hubble continues to watch as the blast debris moves through the ring. The light show makes the glowing ring look like a pearl necklace. Astronomers think the whole ring will be illuminated in a few years.

The glowing ring is expected to become bright enough to illuminate the star’s surroundings, which will provide astronomers with new information on how the star ejected material before the explosion.

Astronomers are analyzing images by NASA’s Spitzer Space Telescope to try to understand the fate of the dust that surrounds the exploded star and in the neighbourhood around the blast.

“We will learn more in the future when the shock wave moves through the inner ring and slams into the outer rings and illuminates them,” Kirshner said. “It could lead to clues about the last 20,000 years of the star. But there are many things that are still a mystery. We still do not understand the evolution of the star before the explosion or how the three rings formed. We also think that the star may be part of a binary system.”

Astronomers also are still looking for evidence of a black hole or a neutron star left behind by the blast. The fiery death of massive stars usually creates these energetic objects. Most astronomers think a neutron star formed 20 years ago. Kirshner said the object could be obscured by dust or it could have become a black hole.

He plans to use the infrared capabilities of the Wide Field Camera 3 — an instrument scheduled to be installed during the upcoming Hubble servicing mission — to hunt for a stellar remnant. Scientists will use another instrument planned for instalment during the mission, the Cosmic Origins Spectrograph, also will be used to analyze the supernova's chemical composition and velocities.

The NASA/ESA/CSA James Webb Space Telescope, scheduled for launch in 2013, will be able to see infrared light from the ring that is 10 times brighter than what astronomers see today. The debris inside the ring will begin to brighten, and astronomers will get another chance to study the interior of an exploded star.