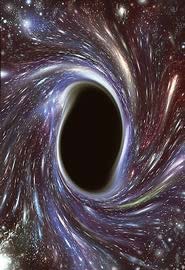 “It’s very difficult to do experiments at real black holes,” points out physicist Ulf Leonhardt of the University of St Andrews in Scotland. So Leonhardt has worked out a way to build a simulated event horizon using a device that halts light in the lab1. “It would be almost table-top sized,” he says.

The simulation could create a mock version of elusive ’Hawking radiation’. These weak electromagnetic waves are thought to occur when light reaches the event horizon, but they are masked from us by other emissions. “We might even be able to see it with the naked eye,” says astronomer Fulvio Melia of the University of Arizona in Tucson.

“If it’s true it’s tremendously interesting,” says cosmologist Bernard Carr of Queen Mary and Westfield College, London. Imitation event horizons may help us to understand the quantum effects of gravity, and resolve conflicts between general relativity (the theory of the biggest bodies in the Universe) and quantum theory (the rules governing its tiniest constituents).

General relativity predicts that nothing can escape a black hole; quantum theory says that Hawking radiation does.

Black holes are formed when ancient stars collapse under their own gravity. They pack vast mass into a pinpoint of space. Their intense gravity sucks in anything that passes too close, including light; they even distort time.

As light waves hit the event horizon, they are thought to split into pairs of particles called ’quanta’; one falls into the black hole and one escapes as Hawking radiation. “A pile-up occurs,” says Melia. Many light waves produce streams of quanta heading forwards and backwards.

Leonhardt’s idea is to copy this barrier, using the recent demonstration that certain materials can halt light2,3,4. Shining a laser beam into cold matter manipulates the rate that its constituent atoms absorb and re-emit waves of a second beam, causing this second beam to slow or stop.

The point where light stands still is analogous to an event horizon, says Leonhardt: quanta will be emitted. The simulation is a ’naked horizon’: a membranous event horizon without the black hole beyond.