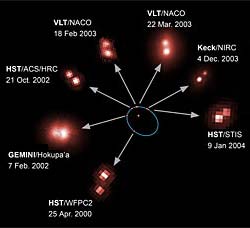 An international team of astronomers using the world’s biggest telescopes have directly measured the mass of an ultra-cool brown dwarf star and its companion dwarf star for the first time. Barely the size of the planet Jupiter, the dwarf star weighs in at just 8.5 percent of the mass of our Sun. This is the first ever mass measurement of a dwarf star belonging to a new stellar class of very low mass ultra-cool dwarf stars. The observation is a major step towards our understanding of the types of objects that occupy the gap between the lightest stars and the heaviest planets.

In 2000 the NASA/ESA Hubble Space Telescope detected a brown dwarf companion around the star named 2MASSW J0746425+2000321. In the subsequent four years the system was tracked by the NASA/ESA Hubble Space Telescope, the European Southern Observatory’s Very Large Telescope (Chile), the Gemini North (Hawaii) and the Keck Telescopes (Hawaii). The masses of the stars could be measured from the orbital motions of the two objects. With a mass of 8.5% of our Sun’s mass, the primary star is precariously close to the theoretical minimal fusion limit, which is 7.5 percent of our Sun’s mass. Objects below this limit are called brown dwarfs, failed stars or even super-planets, as their properties are more similar to those of large Jupiter-type planets than stars. The brown dwarf is measured to be 6.6 percent of the Sun’s mass, and thereby too puny to shine by nuclear fusion.

To be able to compute the masses of the two stars, detailed observations of each component of the binary system were required and interpreted using the latest stellar evolutionary models. Because both objects are very close to each other, telescopes capable of providing high-resolution images were needed. The separation on the sky between the two stars is only about 1/20000 of a degree – similar to the size of a 1 Euro coin seen at a distance of about 25 km.

Furthermore, observations had to be performed over a long period of time (four years) to follow the motion of both objects around each other. Very accurate measurements of the relative position of the individual components were made, so that the full 10-year orbit of the binary system could be reconstructed. Once the orbit was known, the astronomers were able to use Kepler’s laws, first formulated four centuries ago, and some simple high school math to compute the total mass of the system. The distance between the two objects is around 2.5 times the distance from the Sun to the Earth.

Once the total mass of the system was known, very precise measurements of the brightness and temperature of each object taken by Hubble made it possible to split the total mass into the masses of the primary star and the brown dwarf companion.

Both components of the binary system belong to the L spectral class that includes the lowest mass stars and the highest mass brown dwarfs in our solar neighbourhood. This spectral class was discovered in 1997 and was added to the spectral classification that had remained unchanged for half a century. The L class is characterized by the formation of dust grains in the object’s atmosphere, which dramatically changes the visible-light spectrum.

Theoretically predicted for a long time, these sub-stellar objects called “brown dwarfs” were only discovered in 1995. Indirect techniques were conceived to identify brown dwarf candidates from their brightness and colour. However, the mass measurement is the only direct way to classify an object as a brown dwarf. Binary brown dwarfs are especially challenging because they are faint and lie very close to each other. Hubble or large ground-based telescopes using adaptive optics to cancel out atmospheric blur are therefore required to perform such studies.

The study opens a new chapter in the investigation of the dust-filled molecule-rich atmospheres of objects in the transitional zone between the lightest stars and the heaviest exoplanets.