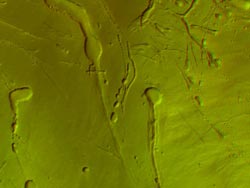 This 3D image shows a portion of the southern flank of Ascraeus Mons, the northernmost volcano of the Tharsis volcano group.

The peculiar depressions which can be observed here, and on several Martian volcanoes, are so-called ’lava tubes’. The anaglyph image has been calculated from the nadir and stereo channels and it was taken by the High Resolution Stereo Camera (HRSC) on Mars Express, from an altitude of 271 kilometres. North is at the right. The 3D image requires stereoscopic (red/green) glasses to view.

This colour image shows a larger portion of the southern flank of Ascraeus Mons. The lighter, ’pink’ areas on the colour image are clouds.
The visible lava tubes are caused by the crusting (or cooled lava) which occurs over a lava channel, a covering making the channel into a tunnel. When lava production ceases, the tunnel empties and the roof of the tunnel falls in, making an elongated depression.

Occasionally, the depression forms a chain of small pits over an emptied lava tunnel. Pit chains and lava tunnels are common on the Martian surface and are also seen on other terrestrial planets and the Moon.

This nadir (vertical view) image is centred at 7.9 degrees North and 255.5 degrees East and was taken by the High Resolution Stereo Camera (HRSC) on Mars Express, from an altitude of 271 kilometres.

This is how the same image looks like before final processing and colour channel addition.

To see the 3D images, you need stereoscopic glasses, readily available in photographic and computer-gaming shops, or via the internet. Be sure to look at your PC screen at arm’s length to appreciate the full three-dimensional effect.