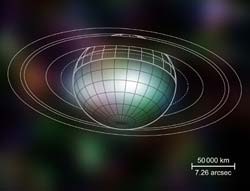 The Chandra X-ray Observatory is a space observatory dedicated to X-ray astronomy. Launched on July 23rd, 1999, this X-ray telescope is particularly dedicated to the observation of high-energy sources in the universe. It has also been used to study the following solar system objects: the Moon, Venus, Mars, Jupiter, and even the Comet C/1999 S4 LINEAR.

Using Chandra, J.-U. Ness and his colleagues detected an unambiguous X-ray emission from the planet Saturn for the first time. A few years ago, a possible such emission was observed using ROSAT, but the present detection is the first certain one.

Ness and his team observed Saturn in April 2003 for about 20 hours. The picture below shows the X-ray image of Saturn that they obtained (in false colour). Each colour (RGB) corresponds to a different energy range of the observed X-rays. Beyond the X-ray detection from Saturn, this Chandra observation allowed the investigators to perform the first in-depth analysis of this emission. The same team also detected X-ray emissions from Saturn using the XMM-Newton Observatory. The observed signal was very similar to what was found with Chandra.

Besides Saturn, other bodies of the solar system, such as the Earth, the Moon, Venus, Mars, Jupiter, comets, and Galilean satellites, emit X-rays. Depending upon the body, these emissions originate from different physical processes. One of the major processes occurs when these bodies scatter the solar X-rays produced by the hot, tenuous solar corona. For all terrestrial bodies that emit X-rays – that is, the Earth, the Moon, and Venus – this mechanism is the main production process of X-rays.

Spectral analysis of the X-rays detected from Saturn with Chandra shows that the signal looks remarkably like that of solar X-ray emissions. This indicates that Saturn’s X-ray emission originates from solar X-rays scattering in Saturn’s atmosphere, a result that is very surprising, as such a process has already been studied on the Moon and was not expected to be so efficient on Saturn.

In addition to the scattering of solar X-rays, on Earth, X-rays are also produced by the same mechanism that creates the aurorae in the polar regions. Aurorae are caused by solar wind electrons that enter the Earth’s atmosphere, thus resulting in these spectacular visible lights. At the same time, X-rays are also produced. The same mechanism has been found to exist on Jupiter: Jovian aurorae have been detected in the UV wavelengths, along with an associated X-ray emission. Saturn was also expected to emit X-rays in the polar region, since spectacular polar aurorae have been observed in the UV wavelengths.

With Chandra, J.-U. Ness and his colleagues were able to study for the very first time how the X-rays are distributed on Saturn’s disk, in order to look for polar X-ray emission. They found that the observed X-ray emission appears to be concentrated around Saturn’s equator. Surprisingly, no auroral X-ray emission has been observed at all. However, the North Pole was occulted by Saturn’s rings and X-ray emission from northern polar regions may have been hidden.

Comparison between Saturn’s and Jupiter’s X-ray emissions shows that their X-ray production mechanisms are very different. First of all, the spatial distribution differs: on Jupiter, X-rays are concentrated in polar regions, suggesting that magnetic fields play an important role. Such a polar X-ray emission has not been found on Saturn, but cannot be excluded. Secondly, the X-ray flux on Saturn is significantly lower than that seen on Jupiter. Nonetheless, the emission level observed from Saturn is consistent with the X-ray equatorial emission from Jupiter, indicating that both emissions originate from similar processes. Ness and his colleagues point out that no single mechanism can easily account for the observed emissions; therefore, they expect combined mechanisms to be involved.

Thanks to the high-angular resolution of the Chandra Observatory, the new detection of X-ray emissions from Saturn, as well as recent results on the same subject from Jupiter, will allow for important progress in the observations of X-rays on giant planets.