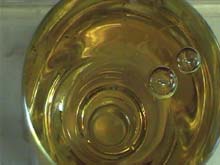 Physicists from the University of Liège in Belgium have succeeded in creating antibubbles (the exact opposite of bubbles) in one of Belgium’s most famous exports – beer – demonstrating what British real-ale drinkers have claimed for a long time: that Belgian beer actually is a lot like dish-water!

Research to be published today in the New Journal of Physics (NJP) reveals for the first time how antibubbles form and move through a liquid. Antibubbles are the exact opposite of bubbles and move down instead of up. Whereas a bubble is a thin flim of liquid in air and which encloses a pocket of air, an antibubble is a thin film of air made inside a liquid, enclosing a pocket of that liquid. Scientists have known about them for almost a century but why and how they form has been a mystery until now.

Dr Stéphane Dorbolo and colleagues at the University of Liège in Belgium and also at the Collège de France have proposed a mechanism which accurately describes how antibubbles are made and also how they move through a liquid. They observed antibubbles in a variety of liquids in the laboratory and made timed digital films of them; observing how they are created, how they move and also how they “die” when they burst. Antibubbles can be created by pouring a liquid containing a “surfactant” (e.g. the soapy water you wash dishes with) onto an identical liquid. They form because a thin film of air is sometimes pulled down along with the liquid itself. This air film then separates two liquids with the same composition and so is called an antibubble, since a real bubble is a liquid film separating two regions of air. This research appears online today in the New Journal of Physics, published jointly by the Institute of Physics and Deutsche Physikalische Gesellschaft (DPG).

Out of curiosity, the researchers also attempted to create antibubbles in Belgium’s most famous export – beer. They didn’t think it would be possible because you can’t create antibubbles (or bubbles) in pure water, alcohol or oil. However, they found that you can make antibubbles in beer. This is because beer contains protein which makes it a surfactant just like dishwashing liquid.

Dr Stéphane Dorbolo said: “Antibubbles are mysterious phenomena but we now understand them much better. We have come up with a good model describing how they form and move and have also learnt more about the type of liquids you can create them in. We tried to create them in beer for fun, and didn’t think it would be possible, but were amazed when we magaged to create giant antibubbles which lasted for almost two minutes and that moved around a glass of beer before bursting.”

He continued: “You can’t create antibubbles in pure water, alcohol or oil. But beer is a special case because it is very similar to dishwashing liquid and contains what we call surfactants which is what you need to be able to produce antibubbles”.

He continued: “We also found that when they die, or burst, they morph into a form of structure which we have nicknamed the jellyfish form because it looks very like a jellyfish swimming through water. It slowly moves and fades away until it disappears altogether.”

Step by step guide to making antibubbles at home

Take some water in a clear bowl or tank
Fill it to the very brim with dishwashing liquid (water with a few squeezes of washing-up liquid in it)
Keep some of this liquid back in a beaker or jug
Very gently pour the liquid from the beaker onto the surface of the bowl
Watch beneath the surface as you pour and vary the speed at which you pour
If you find the right speed, you might see antibubbles form as the stream of water decends beneath the surface
You can now watch these antibubbles move and sink downwards and they will eventually burst.