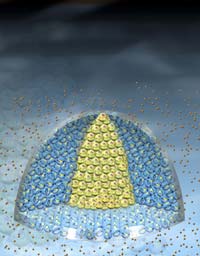 Phase diagram showing the destruction of superconductivity: 1) The yellow region represents the ordered phase in which all the electron pairs share the same phase (all arrows pointing up), 2) The elusive bose metal is in blue in which all the phases are disordered but form a glass, and 3) <br>Beyond the electron pairs fall apart and form an insulator. The vertical axis represents temperature and the in-plane axes any of the tuning parameters that destroy superconductivity such as defects or magnetic field. <br>

The Heisenberg uncertainty principle places severe constraints on the subatomic world. To illustrate, for particles called bosons, the principle dictates that bosons either condense to form a superconductor or they must remain localized in an insulator. However, experiments conducted during the last 15 years on thin films have revealed a third possibility: Bosons can exist as a metal. Scientists have been struggling to interpret this surprising result.

“The conventional theory of metals is in crisis,” said Philip Phillips, a professor of physics at the University of Illinois at Urbana-Champaign. “The observation of a metallic phase for bosons directly contradicts conventional wisdom. A satisfactory explanation requires a new state of matter.”

Writing in the Oct. 10 issue of the journal Science, Phillips and Denis Dalidovich — a former graduate student now working at Florida State University — analyze the thin-film experiments and offer a new explanation in which the charge-carrying bosons condense into a glass-like, metallic state.

Normally, the charge carriers in metals are electrons — fermions that are subject to the Pauli exclusion principle, which limits the number of carriers that can occupy the same quantum state. In a superconductor, however, the charge carriers are pairs of electrons — bosons — that need not obey the Pauli exclusion principle. As a result, macroscopic occupation of a single quantum state is allowed.

“Like musicians in a marching band, bosons in a superconductor all march in step with one another — that is, they have the same phase,” Phillips said. “When they march out of step, the result is an insulator.”

In the experiments (performed at Stanford and the University of Minnesota) that Phillips and Dalidovich analyzed, a thin-film superconductor was transformed into an insulator either by decreasing the film thickness or by applying a perpendicular magnetic field. The signature of a superconductor is zero resistance, while the signature of an insulator is infinite resistance.

“But in these experiments, there was a wide range where the resistance was neither zero nor infinite — it was a finite value that seemed to persist all the way down to zero temperature,” Phillips said. “And if you have a finite resistivity at zero temperature, that is called a metal.”

According to the conventional theory of metals, “that metallicity shouldn’t be there,” Phillips said. “So these experiments that destroy superconductivity, but don’t immediately produce an insulator, pose a serious theoretical question.”

Over the years, new states of matter have been proposed that had exotic magnetic or topological textures associated with the bosons. But these states lacked a key property of a metal — finite conductivity at zero temperature. A better explanation for the intervening metallic phase is that bosons are condensing into a glass-like state.

Glasses are inherently dynamical objects, Phillips said. “They look solid, but there is no crystalline structure and therefore no true ground state. Bosons moving in such a glassy environment fail to localize because no unique ground state exists.”

To illuminate what such a state looks like, consider again the marching band proceeding up a very long hill, Phillips said. The musicians will tire at different rates and fall out of step. But the new marching patterns will propagate through the band. While the band as a whole is out of step, there will be local regions of order where groups of musicians still march in step at the same rate.

“In a similar fashion, when you disrupt the phases in a superconductor, you don’t end up immediately with an insulator,” Phillips said. “Instead, you have a dynamic system in which the phases have local order while overall there is disorder.” Such an intermediate phase in which there is local order but global disorder lies outside the conventional rubric.

The researchers’ findings are relevant to topological glasses in general, including the much-studied vortex glass state that has been argued to have zero resistance and to explain the ground state of high-temperature, copper-oxide superconductors in a perpendicular magnetic field.

“Recent experiments by researchers at Maryland and Caltech show that the resistivity does not vanish in the vortex glass state,” Phillips said. “The resistivity remains finite, so it now appears that the vortex glass is metallic and not a superconductor, consistent with the glassy Bose metal proposed.” This agreement lends further credence to the glassy model proposed to explain the strange Bose metal state of matter.

###
Funding was provided by the American Chemical Society and the National Science Foundation.