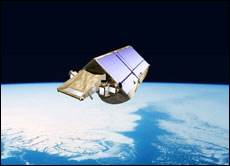 CryoSat, the first Earth Explorer mission within ESA’s Living Planet Programme, is now entering the final phase of assembly prior to its scheduled launch next year.

CryoSat is designed to measure changes in the Earth’s terrestrial and marine ice fields and aims to provide conclusive evidence as to whether there is a trend towards diminishing polar ice cover as a result of climate change.

The first part of the Critical Design Review (CDR), which was successfully completed on 13 June, confirmed that the flight configuration design is compliant with the key design requirements and can now be integrated and tested. This step marks the beginning of the final phase of assembly of the spacecraft.

The principal purpose of the first part of the CryoSat Space Segment CDR was to review the spacecraft functionality and interfaces amongst each of its sub-systems. A second phase of the CDR will begin at the end of October to check that the final design of the spacecraft and its instrument sub-systems are capable of meeting the stringent system requirements and that the mission meets its primary scientific goals.

Construction of the satellite platform that hosts the SIRAL instrument and other sub-systems has already begun at the prime contractor Astrium GmbH’s test and integration facility in Friedrichshafen, Germany. Prototype models of key sub-systems such as the SIRAL, Central Data Management Unit, Star-trackers and Mass Memory Unit are concurrently undergoing testing. At sub-system level various suppliers around Europe, Russia and the US are contributing to the CryoSat satellite.

In parallel to the Space Segment CDR, the Ground Segment Design Review began on 19 June at ESRIN in Frascati, Italy and has now also been successfully completed. The purpose of this review was to thoroughly assess the completeness and consistency of the current Ground Segment design, together with the suitability of testing and quality control plans.

The completion of these two major milestones paves the way for the launch of CryoSat in late 2004 from Plesetsk in Russia.