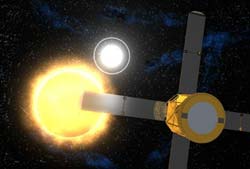 The RHESSI satellite captures a gamma-ray burst flashing just off the limb of the sun, measuring for the first time the polarization of these gamma rays. (Credit: NASA)

University of California, Berkeley’s RHESSI satellite, launched last year by NASA, was snapping X-ray pictures of solar flares in December when it caught an extremely bright background gamma-ray burst, revealing a novel physical feature of these gamma rays – their polarization.

The result sheds new light on the driving force behind these mysterious explosions.

Gamma-ray bursts are mysterious flashes of gamma-ray photons that pop off about once a day randomly in the sky, briefly shining as bright as a million trillion suns.

The strong polarization measured by RHESSI (Reuven Ramaty High-Energy Solar Spectroscopic Imager) provides a unique window on how these bursts are powered, according to Steven Boggs, assistant professor of physics at UC Berkeley. Boggs interprets the measurements to mean that the burst originates from a region of highly structured magnetic fields, stronger than the fields at the surface of a neutron star – until now, the strongest magnetic fields observed in the universe.

“The polarization is telling us that the magnetic fields themselves are acting as the dynamite, driving the explosive fireball we see as a gamma-ray burst,” he said.

The findings are being presented at the American Astronomical Society meeting in Nashville, Tenn., by two UC Berkeley researchers: Boggs and Wayne Coburn, a postdoctoral fellow at UC Berkeley’s Space Sciences Laboratory. The announcement coincides with publication of the findings in the May 22 issue of Nature.

The gamma rays measured by RHESSI were about 80 percent polarized, consistent with the maximum possible polarization, around 75 percent, from electrons spiraling around magnetic field lines. These electrons produce so-called synchrotron radiation. Polarized light, familiar to most of us as the reflected light blocked by Polaroid sunglasses, is light whose magnetic and electric fields are vibrating primarily in one direction, not randomly. Such coherence implies an underlying physical symmetry – in this case, aligned magnetic fields.

“It is very surprising that this is so highly polarized,” said Coburn. “It is difficult to imagine how you can have an area of very aligned magnetic fields when there is a massive supernova explosion going on and stuff flying all over the place.”

Though the electrons are probably accelerated to nearly the speed of light in shock waves, the fact that the gamma rays are maximally polarized implies that the shock waves themselves are driven by an underlying strong magnetic field.

“The amount of polarization they found is so intense that it looks like it’s pure synchrotron radiation and nothing else, and all the other theories are going to have to bite the dust now,” said Kevin Hurley, a UC Berkeley gamma-ray burst physicist. Since 1990, he has operated the Third Interplanetary Network (IPN3) of six satellites linked together to pinpoint gamma-ray bursts and immediately alert astronomers.

For over three decades, astronomers have tried to unravel the fundamental nature of these mysterious explosions. Only in 1997 were astronomers finally able to pin down where in the sky a burst originated with enough precision to determine that the burst was cosmological in origin – that is, it occurred in a galaxy far outside our own Milky Way – and determine that the energy involved was enormous. Over the course of a few seconds, a mass comparable to that of a hundred Earths is converted entirely into gamma-ray energy, outshining the entire universe for a brief moment. The initial burst fades out over a few seconds, but the resulting shock waves (the “afterglow”) can be visible to optical, radio and X-ray telescopes for days after the explosion.

The discovery of polarization reveals how a gamma-ray burst is powered – through the generation of a strong, large-scale magnetic field. Now the question left for theorists and observers is why some supernovae lead to a strong, organized magnetic field. This might be a question one can only address through theory, but the pieces of evidence are in place for theorists to unravel, Boggs said.

Though he leaves it to theorists to work out how such strong magnetic fields could be generated, Boggs said that the burst is probably preceded by the core collapse of a massive star directly to a black hole. A black hole itself has no magnetic field – it has no hair, as the saying goes – but the local magnetic field can thread through the black hole. If rapidly spinning, the black hole will wind up the local field like a top. The energy density in the tightly wound, compressed field would eventually get so high that it would rebound outward in a massive fireball, dragging matter with it.

Though not designed specifically to measure gamma-ray polarization, RHESSI was the first satellite in orbit sensitive to its measurement, said Boggs. Polarized gamma rays stand out because they scatter preferentially in one direction in the detector, whereas unpolarized gamma rays scatter randomly in all directions.

Since RHESSI’s launch on Feb. 5, 2002, Coburn and Boggs have been monitoring the IPN3 for bright bursts. Once alerted by the network, Coburn checks the RHESSI log to see if it was pointing in that direction during the burst. RHESSI stares directly at the sun in order to catch gamma and X-ray emissions from solar flares, but can detect gamma rays from any direction on the sky since they pass through the mechanical structures of the satellite to the detectors. To get a good measure of polarization, however, the bursts must be either roughly aligned or opposite the RHESSI pointing direction, Coburn said.

On December 6, 2002, RHESSI captured a bright burst only 18 degrees off axis – nearly optimal for determining polarization. The burst peaked for about 6 seconds, then gradually faded over a period of about 30 seconds. Coburn and Boggs carefully analyzed the RHESSI data and, after elimination of all systematic error, determined a polarization of 80 percent, plus or minus 20 percent. This indicates a magnetic field of about 10 million billion Gauss, 10,000 times that at the surface of a typical neutron star. The Earth’s magnetic field is about one-half Gauss.

For such a novel measurement, further independent confirmation is crucial, he said. INTEGRAL, a European satellite launched last October, has two gamma-ray instruments that are potentially sensitive to polarization. An ideal confirmation will come when both RHESSI and INTEGRAL observe the same bright burst, which will require some patience on the part of scientists.

“RHESSI was sent into space to uncover the secrets of solar flares, the largest explosions in our solar system, so I am delighted that it has been able to serendipitously provide new information about gamma-ray bursts, the largest explosions in the whole universe,” said Brian Dennis, RHESSI mission scientist at NASA’s Goddard Space Flight Center in Greenbelt, Md. “Curiously, magnetic fields seem to be driving both of these immensely powerful events.”

Boggs noted that astronomers have measured the polarization of the optical afterglow of gamma-ray bursts, but that this tells scientists nothing about the “progenitor” event – the explosion driving the burst. In fact, the afterglow is polarized only slightly, indicating that the glow comes from regions of turbulent magnetic fields, generated in shock waves far from the initial explosion.

Both Boggs and Coburn plan to continue monitoring the RHESSI data to capture more gamma-ray bursts and determine whether strong polarization is characteristic of all bursts and how the polarization evolves during the burst. Coburn said that RHESSI detected the bright March 29 burst, for example, but it was 145 degrees off axis and will require an even more detailed analysis in order to measure the polarization.

This research was supported, in part, by the National Aeronautics and Space Administration and the California Space Institute.