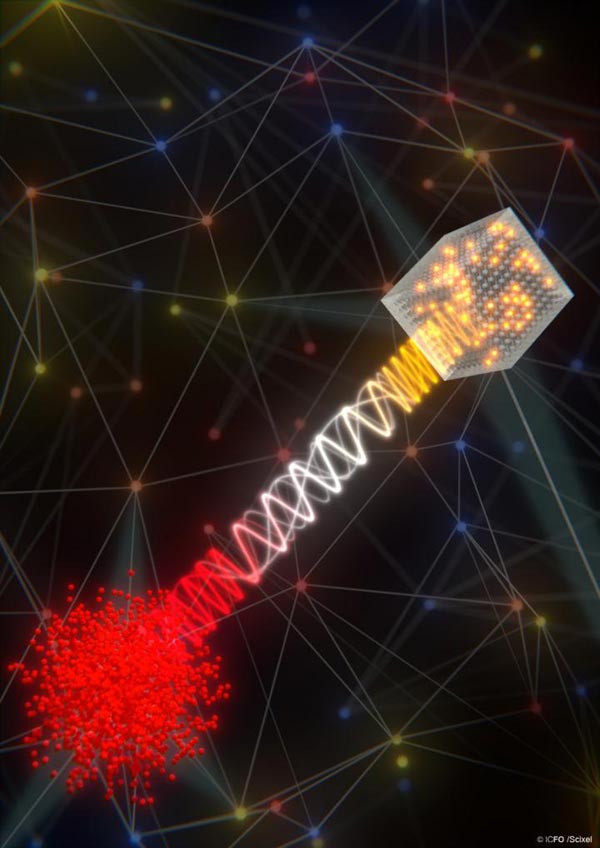 Today, quantum information networks are ramping up to become a disruptive technology that will provide radically new capabilities for information processing and communication. Recent research suggests that this quantum network revolution might be just around the corner.

The key elements of a Quantum Information Network are quantum nodes, that store and process the information, made up of matter systems like cold atomic gases or doped solids, among others, and communicating particles, mainly photons.

While photons seem to be perfect information carriers, there is still uncertainty as to which matter system could be used as network node, as each system provides different functionalities. Therefore, the implementation of a hybrid network has been proposed, searching to combine the best capabilities of different material systems.

Past studies have documented reliable transfers of quantum information between identical nodes, but this is the first time this has ever been achieved with a “hybrid” network of nodes. The ICFO researchers have been able to come up with a solution to making a hybrid quantum network work and solve the challenge of a reliable transfer of quantum states between different quantum nodes via single photons.

A single photon needs to interact strongly and in a noise-free environment with the heterogeneous nodes or matter systems, which generally function at different wavelengths and bandwidths. As Nicolas Maring states “it's like having nodes speaking in two different languages. In order for them to communicate, it is necessary to convert the single photon's properties so it can efficiently transfer all the information between these different nodes.”

How did they solve the problem?

In their study, the ICFO researchers used two very distinct quantum nodes: the emitting node was a laser-cooled cloud of Rubidium atoms and the receiving node a crystal doped with Praseodymium ions. From the cold gas, they generated a quantum bit (qubit) encoded in a single photon with a very-narrow bandwidth and a wavelength of 780 nm.

They then converted the photon to the telecommunication's wavelength of 1552 nm to demonstrate that this network could be completely compatible with the current telecom C-band range. Subsequently, they sent it through an optical fiber from one lab to the other. Once in the second lab, the photon's wavelength was converted to 606 nm in order to interact correctly and transfer the quantum state to the receiving doped crystal node. Upon interaction with the crystal, the photonic qubit was stored in the crystal for approximately 2.5 microseconds and retrieved with very high fidelity.

The results of the study have shown that two very different quantum systems can be connected and can communicate by means of a single photon. As ICREA Prof at ICFO Hugues de Riedmatten comments, “being able to connect quantum nodes with very different functionalities and capabilities and transmitting quantum bits by means of single photons between them represents an important milestone in the development of hybrid quantum networks”. The ability to perform back- and forth-conversion of photonic qubits at the telecom C-band wavelength shows that these systems would be completely compatible with the current telecom networks.

The classical information network or “world wide web” was developed in the 80s, with information flowing through the network by means of “bits”, processed and modulated by electronic circuits and chips and transmitted by light pulses that move information thru the network with minimal signal losses via optical fibers.

ICFO – The Institute of Photonic Sciences, member of The Barcelona Institute of Science and Technology, is a research center located in a specially designed, 14.000 m2-building situated in the Mediterranean Technology Park in the metropolitan area of Barcelona. It currently hosts 400 people, including research group leaders, post-doctoral researchers, PhD students, research engineers, and staff. ICFOnians are organized in 27 research groups working in 60 state-of-the-art research laboratories, equipped with the latest experimental facilities and supported by a range of cutting-edge facilities for nanofabrication, characterization, imaging and engineering.

The Severo Ochoa distinction awarded by the Ministry of Science and Innovation, as well as 14 ICREA Professorships, 25 European Research Council grants and 6 Fundació Cellex Barcelona Nest Fellowships, demonstrate the centre's dedication to research excellence, as does the institute's consistent appearance in top worldwide positions in international rankings. From an industrial standpoint, ICFO participates actively in the European Technological Platform Photonics21 and is also very proactive in fostering entrepreneurial activities and spin-off creation. The center participates in incubator activities and seeks to attract venture capital investment. ICFO hosts an active Corporate Liaison Program that aims at creating collaborations and links between industry and ICFO researchers. To date, ICFO has created 6 successful start-up companies.