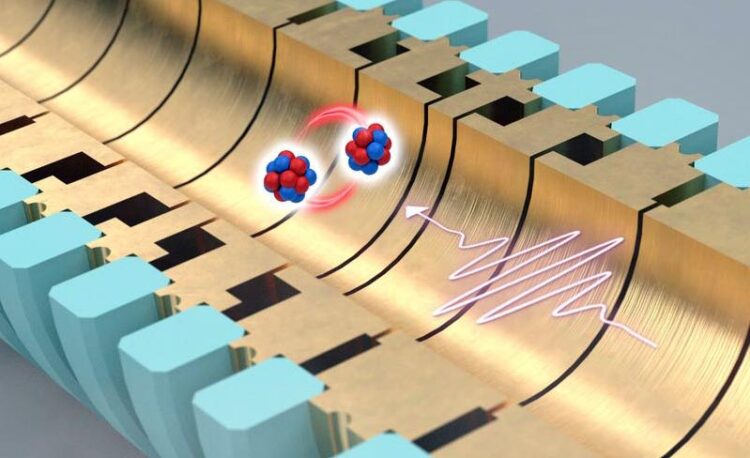 Using a newly developed technique, scientists at the Max Planck Institute for Nuclear Physics (MPIK) in Heidelberg have measured the very small difference in the magnetic properties of two isotopes of highly charged neon in an ion trap with previously inaccessible accuracy. Comparison with equally extremely precise theoretical calculations of this difference allows a record-level test of quantum electrodynamics (QED). The agreement of the results is an impressive confirmation of the standard model of physics, allowing conclusions regarding the properties of nuclei and setting limits for new physics and dark matter.

Electrons are some of the most fundamental building blocks of the matter we know. They are characterized by some very distinctive properties, such as their negative charge and the existence of a very specific intrinsic angular momentum, also called spin. As a charged particle with spin, each electron has a magnetic moment that aligns itself in a magnetic field similar to a compass needle. The strength of this magnetic moment, given by the so-called g-factor, can be predicted with extraordinary accuracy by quantum electrodynamics (QED). This calculation agrees with the experimentally measured g-factor to within 12 digits, one of the most precise matches of theory and experiment in physics to date. However, the magnetic moment of the electron changes as soon as it is no longer a “free” particle, i.e., unaffected by other influences, but instead is bound to an atomic nucleus, for example. The slight changes of the g-factor can be calculated by means of QED, which describes the interaction between electron and nucleus in terms of an exchange of photons. High-precision measurements allow a sensitive test of this theory.

“With our work, we have now succeeded in investigating these QED predictions with unprecedented resolution and, partially, for the first time,” reports group leader Sven Sturm. “To do this, we looked at the difference in the g-factor for two isotopes of highly charged neon ions that possess only a single electron.” These are similar to hydrogen, but with 10 times higher nuclear charge, enhancing the QED effects. Isotopes differ only in the number of neutrons in the nucleus when the nuclear charge is the same. ²⁰Ne⁹⁺ and ²²Ne⁹⁺ with 10 and 12 neutrons, respectively, were investigated.

The ALPHATRAP experiment at the Max Planck Institute for Nuclear Physics in Heidelberg provides a specially designed Penning trap to store single ions in a strong magnetic field of 4 Tesla in a nearly perfect vacuum. The aim of the measurement is to determine the energy needed to flip the orientation of the “compass needle” (spin) in the magnetic field. To do this, the exact frequency of the microwave excitation required for this purpose is looked for. However, this frequency also depends on the exact value of the magnetic field. To determine this, the researchers exploit the motion of ions in the Penning trap, which also depends on the magnetic field.

Despite the very good temporal stability of the superconducting magnet used here, unavoidable tiny fluctuations of the magnetic field limit previous measurements to about 11 digits of accuracy.

The idea of the new method is to store the two ions to be compared, ²⁰Ne⁹⁺ and ²²Ne⁹⁺ simultaneously in the same magnetic field in a coupled motion. In such a motion, the two ions always rotate opposite each other on a common circular path with a radius of only 200 micrometers,” explains Fabian Heiße, Postdoc at the ALPHATRAP experiment.

As a result, the fluctuations of the magnetic field have practically identical effects on both isotopes, so there is no influence on the difference of the energies searched for. Combined with the measured magnetic field, the researchers were able to determine the difference of the g-factors of both isotopes with record accuracy to 13 digits, an improvement by a factor of 100 compared to previous measurements and thus the most accurate comparison of two g-factors worldwide. The resolution achieved here can be illustrated as follows: If, instead of the g-factor, the researchers had measured Germany’s highest mountain, the Zugspitze, with such precision, they would be able to recognize individual additional atoms on the summit by the height of the mountain.

The theoretical calculations were performed with similar accuracy in Christoph Keitel’s department at MPIK. “In comparison with the new experimental values, we confirmed that the electron does indeed interact with the atomic nucleus via the exchange of photons, as predicted by QED,” explains group leader Zoltán Harman. This has now been resolved and successfully tested for the first time by the difference measurements on the two neon isotopes. Alternatively, assuming the QED results are known, the study allows the nuclear radii of the isotopes to be determined more precisely than previously possible by a factor of 10.

“Conversely, the agreement between the results of theory and experiment allows us to constrain new physics beyond the known standard model, such as the strength of the interaction of the ion with dark matter,” states postdoc Vincent Debierre.

“In the future, the method presented here could allow for a number of novel and exciting experiments, such as the direct comparison of matter and antimatter or the ultra-precise determination of fundamental constants,” states first author Dr. Tim Sailer happily.