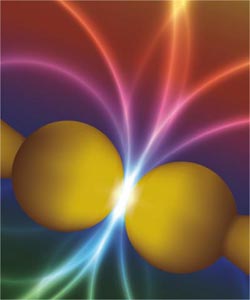 The image shows, in an artistic manner, the change in color when a quantum tunnel effect is produced in a subnanometric gap.<br><br>Credit: Picture courtesy of Cambridge University<br>

Researchers from the Donostia International Physics Center (DIPC) and the Materials Physics Center in Donostia-San Sebastián (CFM) have observed for the first time, with optical methods, the quantum regime in the interaction between nano-sized spheres of gold.

This quantum regime has been identified thanks to the change of colour of the gap or empty space between these particles when these are at distances of less than one nanometre. This work, published in Nature journal, enables literally “seeing” a quantum kiss between nanoparticles.

The gap generated between two opposing nanospheres of gold can change its colour when the distance between them is less than one nanometre, according to recent research co-directed by researchers from the DIPC and the CFM (a joint center between the CSIC [Spanish Scientific Research Council] and the UPV/EHU [the University of the Basque Country]), both based in the Basque City of Donostia-San Sebastián, and in collaboration with researchers from the Universities of Cambridge and Paris-Sud.

This work published in Nature, confirmed that electrons accumulated on the gold walls around the illuminated gap between the spheres can “jump” from one to the other, thanks to the tunnel effect, thus reducing the accumulated charge on the surface of each of these spheres and modify the colour of the gap from red to blue (blueshifting).

This work enables literally “seeing” the effects of quantum mechanics and shows how light interacts with matter at subnanometre sizes. The change in colour of the gap is a “chromatic fingerprint” that identifies the initiation of a quantum regime therein – an effect that had been predicted by the theoretical team of Dr. Aizpurua, the lead researcher in Donostia, and now fully identified as a result of this research. To this end, highly sophisticated experiments have been combined with very advanced theories.

When two metallic spheres with a sufficiently small separation between them are illuminated with white light, this gap acquires colour thanks to the interaction of the electrons on the surface of the spheres with light. The beam of light 'pushes' the electrons and makes them oscillate, which gives a red colour to the gap. As the spheres get closer, the electron charge increases and this red colour intensifies. When the distance between both is reduced to under 0.35 nanometres, this accumulation of charge can be seen to drop, due to the tunnel effect, and thanks to which the electrons can jump from one ball to another without the spheres coming into contact with each other. Just as the quantum theory developed by the research teams in Donostia and Paris predicted, it is possible to identify this quantum electronic leap, given that, as the accumulated charge drops, the red colour of the gap changes to blue.

Experimental team leader and University of Cambridge researcher, Professor Jeremy Baumberg compares this reduction in charge with the tension released from a kiss “we think of this like the tension building up between a romantic couple. As their faces get closer the tension mounts, and only a kiss discharges this energy”. In this case, however, the gold nanospheres approaching each other generate a virtual kiss, as they never actually touch, releasing the charge on their surfaces and changing the colour of the gap between them. As Professor Baumberg says, “it is practically like kissing, without the lips actually touching”.

The experimental team at Cambridge explained: “aligning two gold nano-particles is like closing your eyes and trying to hold two needles with the fingers of either hand so that the points of each needle touch. Achieving this has meant years of hard work”.

Javier Aizpurua commented that, in order to predict the colour changes now confirmed with this experiment, “the fusion of the quantum vision with the classical vision of the world” was necessary. “The modelling of so many electrons oscillating within the gold particles in response to a beam of light could not be described with existing theories”, assured the CSIC and DIPC researcher.

This new result establishes a fundamental quantum limit for the minimum dimensions within which we can trap light. Moreover, this reinterpretation of the interaction between light and matter at a sub-nanometric scale could provide new ways of describing and measuring the atomic-scale world and open doors to new strategies for the manufacture of even smaller optoelectric technological devices and access new limits of resolution in photochemistry.

This research was funded by the Basque Government through its Science Agency, Ikerbasque, and the ETORTEK Nanoscience and Nanotechnology project, as well as by a European Union initiative through the Eranet CUBiHOLE project which originally brought together the teams involved in this research. Part of this work was developed during the time spent by Professor Baumberg as an Ikerbasque Visiting Professor at the DIPC.