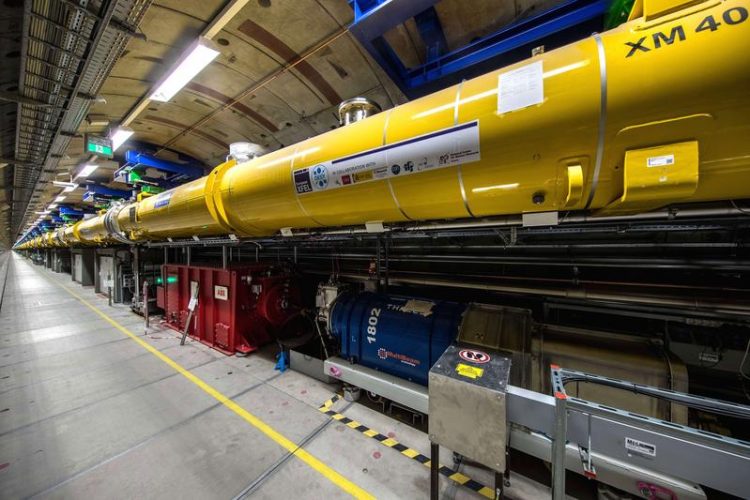 View into the 2.1-kilometre long accelerator tunnel of European XFEL with the yellow superconducting accelerator modules hanging from the ceiling. Photo: DESY/D. Nölle

The international X-ray laser European XFEL has reached one of its final major milestones on the way to scientific user operation. DESY has successfully commissioned the particle accelerator, which drives the X-ray laser along its full length.It is the world’s largest superconducting linear accelerator.

Accelerated electrons have passed through the complete 2.1 kilometre length of the accelerator tunnel. In the next step, the energy of the electrons will be raised further, before they will be sent into a magnetic slalom section where the bright X-ray laser light will be generated. This first lasing is planned for May. DESY is the largest shareholder of the European XFEL and is responsible for the construction and operation of the superconducting linear accelerator.

“The European XFEL’s particle accelerator is the first superconducting linear accelerator of this size in the world to go into operation. With the commissioning of this complex machine, DESY and European XFEL scientists have placed the crown on their 20-year engagement in developing and building this large international project. The first experiments are within reach, and I am quite excited about the discoveries ahead of us”, says Chairman of the DESY Board of Directors Helmut Dosch. “I am exceptionally happy about arriving at this milestone and congratulate all involved for the outstanding work and their great tenacity.”

Chairman of the European XFEL Management Board Robert Feidenhans’l says: “The successful commissioning of the accelerator is a very important step that brings us much closer to the start of user operation in the fall. Under the leadership of DESY, the Accelerator Consortium, comprising 17 research institutes, has done an excellent job in the last years. I thank all colleagues involved for their work, which entailed a great deal of know-how and precision but also much personal commitment. The accelerator is an outstanding example of successful global cooperation, encompassing research facilities, institutes, and universities alongside companies that produced certain components.”

The European XFEL is an X-ray laser of superlatives: The research facility will produce up to 27 000 X-ray laser flashes per second, each so short and intense that researchers can make pictures of structures and processes at the atomic level.

The superconducting particle accelerator of the facility, which is now operational across its full length, is the key component of the 3.4 km long X-ray laser. The accelerator’s superconducting TESLA technology, which was developed in an international collaboration led by DESY, is the basis for the unique high rate of X-ray laser flashes. Superconductivity means that the accelerator components have no electrical resistance. For this, they have to be cooled to extremely low temperatures.

From December into January, the accelerator was cooled to its operating temperature of -271°C. The so-called electron injector and first section of the main accelerator then went into operation, comprising altogether 18 of 98 total accelerator modules. Within this section, the electron bunches were both accelerated and compressed three times, down to 10 micrometres (a thousandth of a millimetre). Finally, the team placed the third section of the accelerator into operation. Currently, the electrons reach an energy of 12 gigaelectronvolts (GeV), and in regular operation, an energy of up to 17.5 GeV is planned.

“The energy and other properties of the electron bunches are already within the range where they will be during first user operation”, says DESY physicist Winfried Decking, who leads the commissioning of the European XFEL accelerator.

The coordination of the unique components of the accelerator and the control of the electron beam will now be intensively tested before the accelerated electrons are allowed into the following section: the up to 210 m long special magnetic structures called undulators. There, the ultrabright X-ray laser flashes will be generated. Scientific experiments should begin this fall.

The superconducting particle accelerator of the European XFEL was built over the last seven years through an international consortium, under the leadership of DESY, composed of the following research institutes: CEA and CNRS in France; INFN in Italy; IFJ-PAN, NCBJ, and the Wrocław University of Technology in Poland; the Budker Institute, Institute for High Energy Physics, Institute for Nuclear Research, and NIIEFA in Russia; CIEMAT and Universidad Politécnica de Madrid in Spain; the Manne Siegbahn Laboratory, Stockholm University, and Uppsala University in Sweden; and the Paul Scherrer Institute in Switzerland.

About DESY
Deutsches Elektronen-Synchrotron DESY is the leading German accelerator centre and one of the leading in the world. DESY is a member of the Helmholtz Association and receives its funding from the German Federal Ministry of Education and Research (BMBF) (90 per cent) and the German federal states of Hamburg and Brandenburg (10 per cent). At its locations in Hamburg and Zeuthen near Berlin, DESY develops, builds and operates large particle accelerators, and uses them to investigate the structure of matter. DESY’s combination of photon science and particle physics is unique in Europe. DESY is the largest shareholder of the European XFEL and operates the research facility’s superconducting particle accelerator.

About European XFEL
The European XFEL, currently being commissioned in the Hamburg area, is an international research facility of superlatives: 27 000 X-ray flashes per second and a brilliance that is a billion times higher than that of the best conventional X-ray sources will open up completely new opportunities for science. Research groups from around the world will be able to map the atomic details of viruses, decipher the molecular composition of cells, take three-dimensional “photos” of the nanoworld, “film” chemical reactions, and study processes such as those occurring deep inside planets. The construction and operation of the facility is entrusted to the European XFEL GmbH, a non-profit company that cooperates closely with the research centre DESY and other organizations worldwide. The company, which has a workforce of about 280 employees, expects to start user operation of the facility in the second half of 2017. With construction and commissioning costs of 1.22 billion euro (at 2005 price levels) and a total length of 3.4 kilometres, the European XFEL is one of the largest and most ambitious European research projects to date. At present, 11 countries have signed the European XFEL convention: Denmark, France, Germany, Hungary, Italy, Poland, Russia, Slovakia, Spain, Sweden, and Switzerland. Germany (Federal Ministry of Education and Research as well as the federal states of Hamburg and Schleswig-Holstein) contribute 58% of the costs, Russia 27%, and the other partner countries between 1% and 3%.

For more information, go to www.xfel.eu