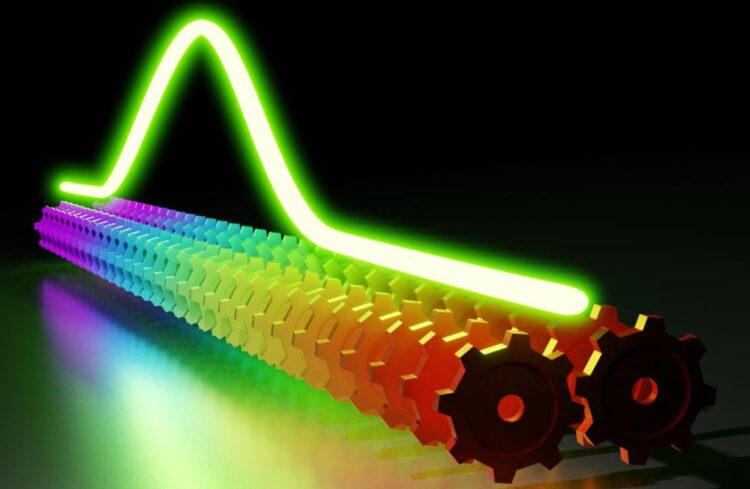 Gears as hybridised modes of the dimer and a spectral profile of a gear soliton.
Credit: EPFL/Alexey Tikan

Periodic pulses of light forming a comb in the frequency domain are widely used for sensing and ranging. The key to the miniaturisation of this technology towards chip-integrated solutions is the generation of dissipative solitons in ring-shaped microresonators. Dissipative solitons are stable pulses circulating around the circumference of a nonlinear resonator.

Since their first demonstration, the process of dissipative soliton formation has been extensively studied and today it is rather considered as textbook knowledge. Several directions of further development are actively investigated by different research groups worldwide. One of these directions is the generation of solitons in coupled resonators. The collective effect of many resonators promises better performance and control over the frequency combs, exploiting another (spatial) dimension.

But how does the coupling of additional resonators change the soliton generation process? Identical oscillators of any kind, affecting each other, can no longer be considered as a set of distinct elements. Due to the hybridisation phenomenon, the excitation of such a system influences all its elements, and the system has to be treated as a whole. The simplest case when the hybridisation takes place is two coupled oscillators or, in molecular terminology, a dimer.

As well as coupled pendulums and atoms forming a molecule, modes of coupled optical microresonators experience hybridisation but, in contrast to other systems, the number of involved modes is large (typically from tens to hundreds). Therefore, solitons in a photonic dimer are generated in hybridised modes involving both resonators, which adds another degree of control if one has access to hybridisation parameters.

In a paper published at Nature Physics, researchers from the laboratory of Tobias J. Kippenberg at EPFL, and IBM Research Europe led by Paul Seidler, demonstrated the generation of dissipative solitons and, therefore, coherent frequency combs in a photonic molecule made of two microresonators. The generation of a soliton in the dimer implies two counter-propagating solitons in both resonator rings. The underlying electric field behind every mode of the dimer resembles two gears turning in opposite directions, which is why solitons in the photonic dimer are called Gear Solitons. Imprinting heaters on both resonators, and thereby controlling the hybridisation, authors demonstrated the real-time tuning of the soliton-based frequency comb.

Even the simple dimer arrangement, besides the hybridised (gear) soliton generation, has demonstrated a variety of emergent phenomena, i.e. phenomena not present at the single-particle (resonator) level. For instance, researchers predicted the effect of soliton hopping: periodic energy exchange between the resonators forming the dimer while maintaining the solitonic state. This phenomenon is the result of simultaneous generation of solitons in both hybridised mode families whose interaction leads to energy oscillation. Soliton hopping, for example, can be used for the generation of configurable combs in the radio-frequency domain.

“The physics of soliton generation in a single resonator is relatively wellunderstood today,” says Alexey Tikan a researcher at the Laboratory of Photonics and Quantum Measurements, EPFL. “The field is probing other directions of development and improvement. Coupled resonators are one of a few such perspectives. This approach will allow for the employment of concepts from adjacent fields of Physics. For example, one can form a topological insulator (known in solid state physics) by coupling resonators in a lattice, which will lead to the generation of robust frequency combs immune to the defects of the lattice, and at the same time profiting from the enhanced efficiency and additional degrees of control. Our work makes a step towards these fascinating ideas!”