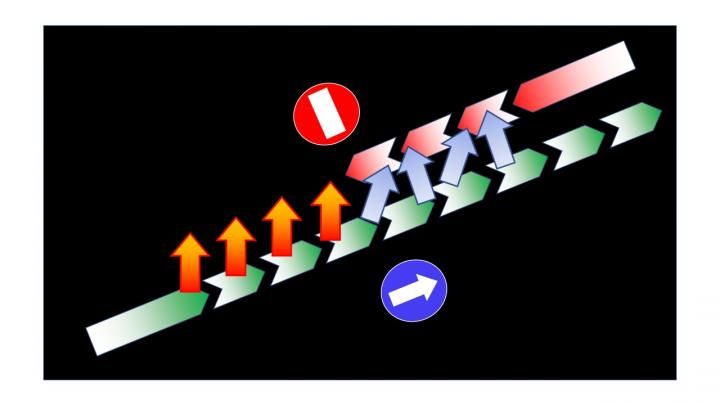 This is a spin chain in which spin interactions are strong in the left half (orange arrows) and weak in the right half (blue arrows). A spin current from left to right (green arrowed line) is possible, but not in the opposite direction (red arrowed line). A very large rectification is the result of this. Credit: SUTD

The study of the effect of strong interactions in quantum systems is particularly challenging, however, it is well known that strong interaction between quantum particles can completely change the properties of a system, making it, for instance, ferromagnetic, superconducting, etc.

Strong interactions in spin systems can also allow for the generation of interesting transport properties in a material.

Researchers from Singapore University of Technology and Design (SUTD), University Insubria and Universidade Federal de Minas Gerais have shown a completely new approach to controlling spin currents based on strong spin-spin interactions, which results in diodes for spin current with a giant rectification.

In this work the researchers demonstrated, both analytically and using advanced numerical simulations that, if the interactions are stronger than a certain magnitude the system can drastically change and becomes an insulator, preventing currents from flowing. Interestingly, this drastic change to insulating behaviour only occurs when trying to impose the current in one direction. When trying to drive a spin current in the opposite direction, the flow is possible and the system is not an insulator.

These predictions, once tested in experiments with atoms near absolute zero temperature or with structures made of a few atoms deposited carefully on surfaces, can open the way to substantial progress in material science, and new devices can be built based on this principle.

SUTD Assistant Professor D. Poletti, who led the research effort, states that: “This is a very interesting effect we have stumbled upon. Much more interesting physics is yet to be uncovered in strongly interacting spintronic systems, and this can lead to the creation of new technologies.”