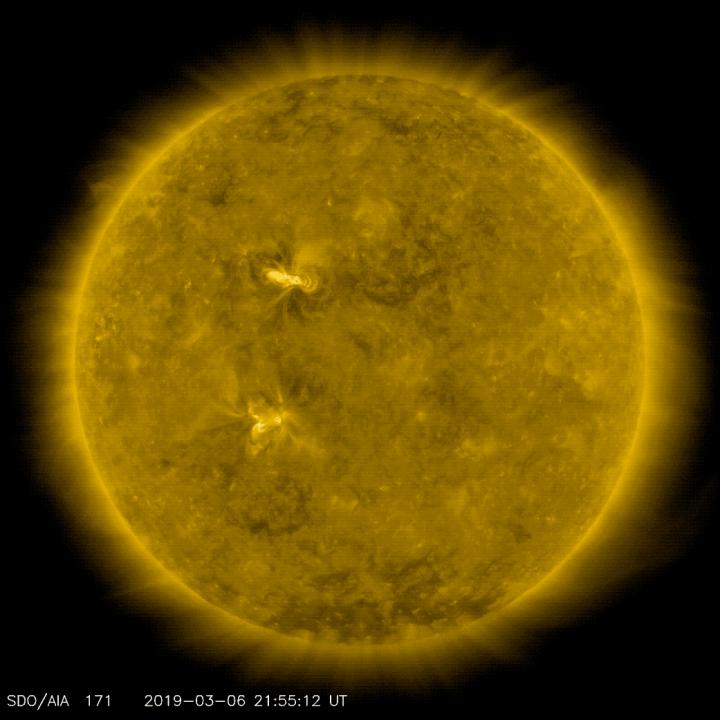 The relative speeds and positions of the Moon, the Sun and NASA's Solar Dynamics Observatory resulted in this unusual lunar transit where the Moon appears to pause and reverse course. View animated GIF: https://www.nasa.gov/sites/default/files/thumbnails/image/171transitslowpause3.gif Credit: NASA/Goddard/SDO

SDO sees lunar transits regularly, when the Moon passes in front of its view of the Sun. The Moon's unusual apparent behavior during this particular transit is a phenomenon similar to retrograde motion: When a celestial object appears to move backwards because of the way that different objects move at different speeds at different points in their orbits.

In this case, the first part of the transit — when the Moon moves left to right — appears to be “reverse” motion. SDO overtakes the Moon, moving at about 1.9 miles per second perpendicular to the Sun-Earth line compared to the Moon's 0.6 miles per second, making the Moon appear to move in the opposite direction you would see if you were standing still on Earth.

The second part of the transit — when the Moon appears to pause and rewind — happens as SDO enters the dusk part of its orbit and begins moving away from the Moon, nearly parallel to the shadow it's casting through space.

At that point, the Moon once again moves faster than SDO – when compared to the Sun-Earth line – overtaking it. So the spacecraft now sees it move in the other direction — the same direction that a stationary observer on Earth would see.

This isn't the first time that SDO has seen the Moon seem to move in two different directions during a lunar transit. This time, the Moon just happened to remain in SDO's sight as it began the dusk part of its orbit, leading to the freeze-frame effect.

This lunar transit lasted about four hours, from 5 p.m. to 9:07 p.m. EST, and, at peak, the Moon covered 82 percent of the Sun's face. The Moon's edge appears sharp because the Moon has no atmosphere.

On the other hand, Earth eclipses of the Sun have a blurry edge when seen by SDO, because the gases in Earth's atmosphere let through only part of the Sun's light.