Home / Physics and Astronomy / Magnetic moment of a single antiproton determined with greatest precision ever
19.01.2017

Magnetic moment of a single antiproton determined with greatest precision ever 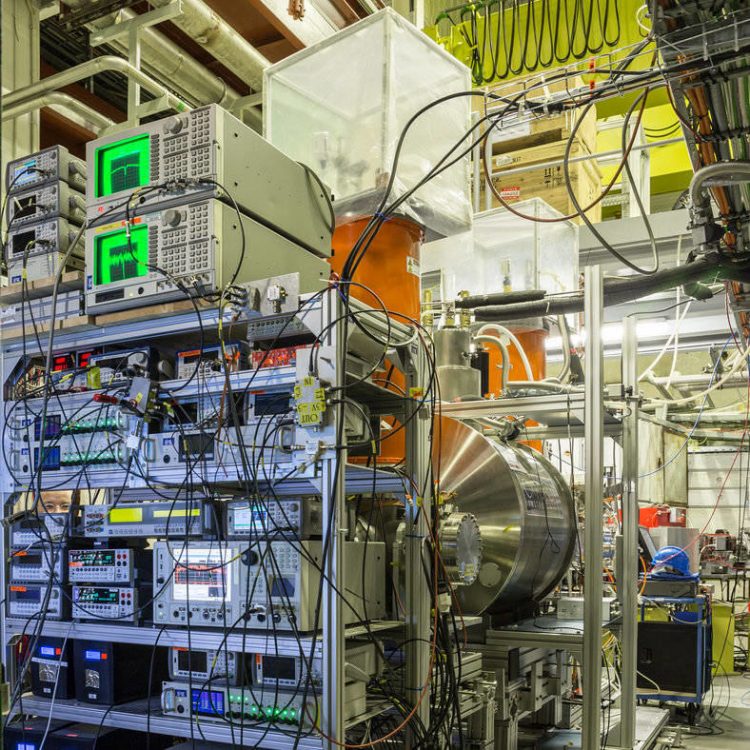 BASE experiment using the CERN antiproton decelerator in Geneva: Visible in the image are the control equipment, the superconducting magnet that houses the Penning trap, and the antiproton transfer beam tube. photo/©: Stefan Sellner, RIKEN

As self-evident as it is that matter exists, its origins are just as mysterious. According to the principles of particle physics, when the universe was originally formed equal amounts of matter and antimatter would have been created, which then should have destroyed each other in a process that physicists call annihilation. But in reality, our universe shows a manifest imbalance in favor of matter.

Therefore, scientists are looking for a small difference between a particle and its antiparticle that could explain why matter actually exists. The multinational Baryon Antibaryon Symmetry Experiment (BASE) collaboration at the CERN research center has set a new benchmark in this search by successfully measuring an important characteristic of the antiproton with the greatest accuracy ever achieved. The g-factor, a quantity that characterizes the magnetic moment, has been measured with a precision increased by a factor of six compared to previous results.

The Antiproton Decelerator storage ring at CERN produces cooled antiprotons in large quantities for a wide range of antimatter experiments. In the experiments carried out by the BASE group, of which Johannes Gutenberg University Mainz (JGU) is a member, single ultracold antiprotons are studied in an electromagnetic particle trap.

The system consists of three Penning traps. A reservoir trap stores a cloud of antiprotons for the experiment and supplies single particles to the co-magnetometer trap and the actual analysis trap. The purpose of the co-magnetometer trap is to continuously monitor the magnetic field. The analysis trap is surrounded by an extremely large magnetic field inhomogeneity of 300 Kilotesla per square meter.

This ultra-powerful magnetic field inhomogeneity is a fundamental requirement for detecting spin-flips, a method developed by Nobel Prize laureate Hans Georg Dehmelt in 1987 for measuring the magnetic moment of the electron and the positron. “However, the challenge in our case is much greater because the magnetic moment of the proton and the antiproton is about 660 times smaller in comparison,” wrote the BASE scientists in a paper published in Nature Communications. The principle used to measure the magnetic moment of single protons was developed five years ago by a collaboration with a group at the Institute of Physics at Johannes Gutenberg University Mainz led by Professor Jochen Walz. With its high-precision measurement of the proton in 2014 the collaboration goes unchallenged as the top research team in this field.

The method used to analyze the antiproton employs the same principle. The g-factor was determined on the basis of six individual measurements with an uncertainty of just 0.8 parts per million. The value of 2.7928465(23) is six times more precise than the previous record achieved by another CERN research group in 2013. As recently as 2011, the magnetic moment of the antiproton was only known to an accuracy of three decimal places.

The new result is consistent with the g-factor of the proton as measured in Mainz in 2014, namely 2.792847350(9). “This means that within our experimental uncertainty, we cannot detect any difference between protons and antiprotons. At this level our measurement is consistent with the predictions of the Standard Model,” stated Stefan Ulmer, coordinator of BASE at CERN and a former member of Walz' team at Mainz University.

Protons and antiprotons thus still appear to be mirror images of each other, meaning there is still no explanation of why matter actually exists at all and did not simply vaporize in the first moments of the Big Bang. The BASE collaboration intends to go a step further by increasing the precision of its measurements using a double Penning trap technique. This is a complex technique that was used for the Mainz proton measurements in 2014 and offers the potential of improving accuracy by a factor of 1,000.

“The asymmetry between matter and antimatter is so obvious that something must have happened which cannot yet be detected using the methods currently available to modern physics. So our main aim is to find approaches that can help solve this extraordinary puzzle,” said Ulmer of the group's future plans. In addition to Johannes Gutenberg University Mainz, the other members involved in the research projects are the RIKEN research center in Japan, the Max Planck Institute for Nuclear Physics in Heidelberg, the Leibniz Universität Hannover and the GSI Helmholtz Center for Heavy Ion Research in Darmstadt.

Images:
http://www.uni-mainz.de/bilder_presse/08_physik_quantum_antiproton_01.jpg
BASE experiment using the CERN antiproton decelerator in Geneva: Visible in the image are the control equipment, the superconducting magnet that houses the Penning trap, and the antiproton transfer beam tube.
photo/©: Stefan Sellner, RIKEN

http://www.uni-mainz.de/bilder_presse/08_physik_quantum_antiproton_03.jpg
BASE Penning trap system that was used to measure the magnetic moment of the antiproton
photo/©: Georg Schneider, JGU