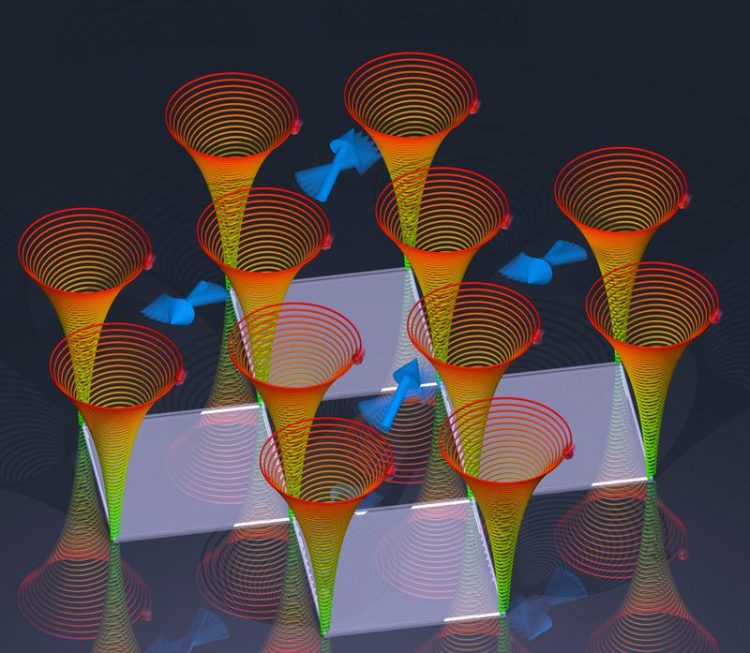 Controlling functional properties by light is one of the grand goals in modern condensed matter physics and materials science. A new study now demonstrates how the ultrafast light-induced modulation of the atomic positions in a material can control its magnetization. An international research team led by Andrea Cavalleri from the Max Planck Institute for the Structure and Dynamics of Matter at CFEL in Hamburg used terahertz light pulses to excite pairs of lattice vibrations in a magnetic crystal.

These short bursts of light caused the lattice ions to rotate around their equilibrium positions, acting as an ultrafast effective magnetic field on the electronic spins to coherently drive a magnetic wave. These findings represent an important hallmark on how light interacts with matter and establish a novel approach in the control of magnetization at terahertz speed, making the research potentially relevant for magnetic storage technologies. The results are presented in the journal Nature Physics today.

Understanding microscopic interactions and engineering collective responses to tailor material functionalities has been a driving force for the fields of condensed matter physics and materials science, both from a fundamental and technological point of view. Conventional static approaches to modify and control material properties include chemical substitution, i.e. the replacement of particular atoms in the crystal lattice by atoms of another chemical element, or the application of external perturbations like pressure and magnetic fields.

A conceptually different path consists in the ultrafast dynamical modulation of material parameters. In particular, the direct excitation of lattice vibrations in solid-state systems (collective excitations of the ions called phonons) by ultra-short and ultra-intense terahertz light pulses has proven to be an extremely efficient route to material control. The Hamburg group has been playing a pioneering role in this technique, called nonlinear phononics. Recent successful examples include the control of insulator–metal transitions, melting of magnetic order and enhancement of superconductivity.

The origin of this powerful tool lies in the nonlinear nature of the crystal lattice. Indeed, a phonon driven by laser light to large amplitude can transfer energy to other lower-frequency vibrational modes. This nonlinear phonon–phonon coupling results in a transient, directional and selective distortion of the crystal structure, i.e. specific atoms of the lattice move temporarily to different positions. This effect is of extreme relevance for complex materials, in which macroscopic electronic properties are strongly tied to the atomic arrangement.

In an effort to generalize these principles and show that the coherent driving of phonons can not only affect the crystal structure but also directly control other properties like magnetization, an international team of scientists from Germany, the Netherlands and the USA studied terahertz stimulation of the magnetic material erbium orthoferrite (ErFeO3).

First, the researchers excited a single phonon and observed the typical signature of nonlinear phononics, i.e. the energy transfer to lower-frequency lattice vibrations. The key idea to go beyond this “conventional” observation was to combine the action of two different orthogonal phonons at the same time. Due to the modes’ slightly different frequencies, the atoms of the crystal lattice started rotating about their equilibrium positions resulting in a circularly polarized phononic field. This movement dynamically modulated the electric field felt by the electrons, perturbing their orbital motion. As a consequence, a high-frequency magnetic wave – a collective excitation of the electron spins – was excited. These results can be viewed as the generation of an ultrafast magnetic field pulse by the circular phonons.

“This is the first time that a direct and coherent control of spins by lattice vibrations has been observed,” says Tobia Nova, Ph.D. student at the MPSD in Hamburg and first author of the paper. The experiment successfully demonstrates that it is possible to transfer energy between driven phonons and magnetic excitations while “distorting” the spin ordering of a material, thus leading to an ultrafast control of its magnetization.

The magnetic wave amplitude scales quadratically with the terahertz electric field strength, implying that a moderate increase in the field strength may lead to immense phonon-driven magnetic dynamics and possibly toward magnetic switching. As the effect operates at terahertz frequencies, it might become applicable in new devices that operate at such high speeds.

Furthermore, possible applications of circularly polarized phonons might extend well beyond magnetization control. A time-dependent perturbation in the form of circularly polarized light has been shown to manipulate surface properties in a new class of materials, so-called topological insulators, and further has been predicted to induce analogous topological states in graphene. In a similar fashion, phonon-driven Floquet physics might be induced by lattice rotations.

This work was made possible by the ERC Synergy Grant “Frontiers in Quantum Materials’ Control” (Q-MAC) and The Hamburg Centre for Ultrafast Imaging (CUI). The Center for Free-Electron Laser Science (CFEL) is a joint enterprise of DESY, the Max Planck Society and the University of Hamburg. Further institutions involved in this collaboration were the Radboud University in Nijmegen and the University of Michigan.