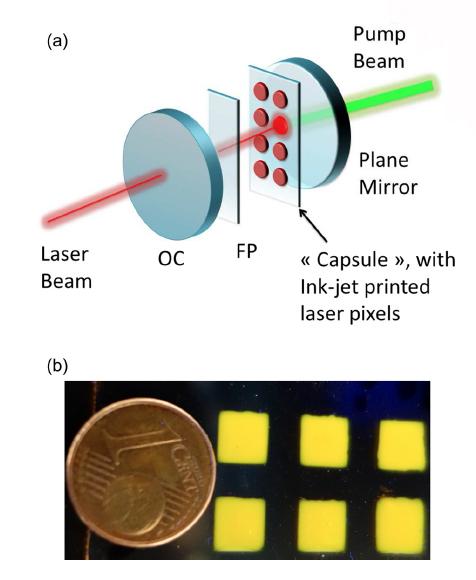 Inkjet printed "lasing capsules" serve as the core of an organic laser. Figure (a) shows a schematic of the laser setup, while figure (b) shows actual lasing capsules, which would cost only a few cents to produce. OC stands for "Output Coupler" and FP stands for Febry-Perot etalon. Credit: Sanaur, et al/JAP

Since lasers were invented more than 50 years ago, they have transformed a diverse swath of technology — from CD players to surgical instruments.

Now researchers from France and Hungary have invented a way to print lasers that's so cheap, easy and efficient they believe the core of the laser could be disposed of after each use. The team reports its findings in the Journal of Applied Physics, from AIP Publishing.

“The low-cost and easiness of laser chip fabrication are the most significant aspects of our results,” said Sébastien Sanaur, an associate professor in the Center of Microelectronics in Provence at the Ecole Nationale Supérieure des Mines de Saint-Étienne in France.

Sanaur and his colleagues made organic lasers, which amplify light with carbon-containing materials. Organic lasers are not as common as inorganic lasers, like those found in laser pointers, DVD players, and optical mice, but they offer benefits such as high-yield photonic conversion, easy fabrication, low-cost and a wide range of wavelengths.

One obstacle that has held back organic lasers is the fact that they degrade relatively quickly — but that hurdle might be less daunting if the lasers are so cheap they could be tossed when they fail.

“By piezoelectric inkjet printing, you print 'where you want, when you want,' without wasting raw materials,” Sanaur said. The technique doesn't require masks, can be done at room temperature and can print onto flexible materials.

The researchers tested a variety of possible inks, before settling on a commercial ink variety called EMD6415, which they mixed with dyes. The ink was printed in small square shapes onto a quartz slide.

The dyed ink acted as the core of the laser, called a gain medium. A gain medium amplifies light and produces the characteristically narrow, single-color laser beam.

A laser also requires mirrors to reflect light back and forth through the gain medium and an energy source, called a pump, to keep the light amplification going.

The disposable part of the new laser is the printed gain medium, which the researchers call the “lasing capsule.” They estimate it could be produced for only a few cents. Like the replaceable blades in a razor, the lasing capsule could be easily swapped out when it deteriorates.

The research team used two different types of dyes to produce laser emission ranging from yellow to deep red. Other dyes could cover the blue and green part of the spectrum, they predict.

With further development, the inexpensive inkjet-printed laser could send data over short plastic fibers and serve as a tool for analysing chemical or biological samples.

The article, “Inkjet-printed vertically-emitting solid-state organic lasers,” is authored by Oussama Mhibik, Sebastien Chenais, Sébastien Forget, Christophe Defranoux and Sébastien Sanaur. It will be published in the Journal of Applied Physics May 3, 2016 (DOI: 10.1063/1.4946826). After that date, it can be accessed at http://scitation.aip.org/content/aip/journal/jap/119/17/10.1063/1.4946826.

The authors of this paper are affiliated with the Université Paris, Semilab and ENSM-SE.