How to force photons to never bounce back 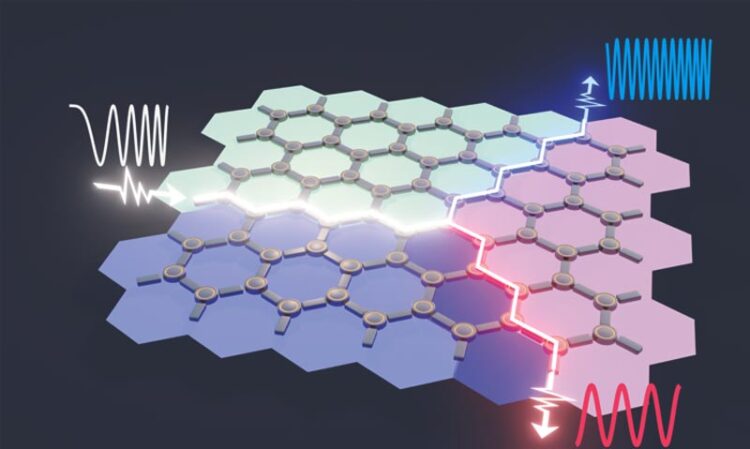 EPFL scientists have developed a topology-based method that forces microwave photons to travel along on way path, despite unprecedented levels of disorder and obstacles on their way.

Topological insulators are materials whose structure forces photons and electrons to move only along the material’s boundary and only in one direction. These particles experience very little resistance and travel freely past obstacles such as impurities, fabrication defects, a change of signal’s trajectory within a circuit, or objects placed intentionally in the particles’ path. That’s because these particles, instead of being reflected by the obstacle, go around it “like river-water flowing past a rock,” says Prof. Romain Fleury, head of EPFL’s Laboratory of Wave Engineering, within the School of Engineering.

Until now, these particles’ exceptional resilience to obstacles applied only to limited perturbations in the material, meaning this property couldn’t be exploited widely in photonics-based applications. However, that could soon change thanks to research being conducted by Prof. Fleury along with his PhD student Zhe Zhang and Pierre Delplace from the ENS Lyon Physics Laboratory. Their study, appearing in the renowned journal Nature, introduces a topological insulator in which the transmission of microwave photons can survive unprecedented levels of disorder.

“We were able to create a rare topological phase that can be characterized as an anomalous topological insulator. This phase arises from the mathematical properties of unitary groups and gives the material unique – and unexpected – transmission properties,” says Zhang.

This discovery holds great promise for new advances in science and technology. “When engineers design hyperfrequency circuits, they have to be very careful to make sure that waves are not reflected but rather guided along a given path and through a series of components. That’s the first thing I teach my electrical engineering students,” says Prof. Fleury. “This intrinsic constraint, known as impedance matching, limits our ability to manipulate wave signals. However, with our discovery, we can take a completely different approach, by using topology to build circuits and devices without having to worry about impedance matching – a factor that currently restricts the scope of modern technology.”

Prof. Fleury’s lab is now working on concrete applications for their new topological insulator. “These types of topological circuits could be extremely useful for developing next-generation communication systems,” he says. “Such systems require circuits that are highly reliable and easily reconfigurable.” His research group is also looking at how the discovery could be used for developing new kinds of photonic processors and quantum computers.