Home / Physics and Astronomy / Helium nuclei at the surface of heavy nuclei discovered
18.01.2021 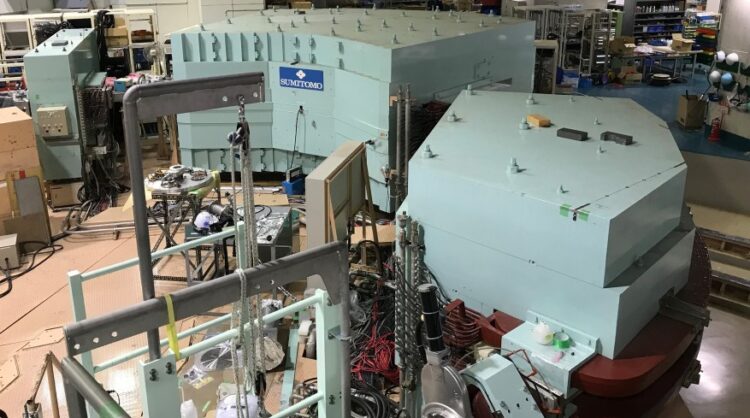 Scientists are able to selectively knockout nucleons and preformed nuclear clusters from atomic nuclei using high-energy proton beams. In an experiment performed at the Research Center for Nuclear Physics (RCNP) in Osaka in Japan, the existence of preformed helium nuclei at the surface of several tin isotopes could be identified in a reaction. The results confirm a theory, which predicts the formation of helium clusters in low-density nuclear matter and at the surface of heavy nuclei. A research team, lead by scientists from TU Darmstadt and the GSI Helmholtz Center for Heavy-Ion Research, and from the RIKEN Nishina Center for Accelerator-Based Science, discuss the new findings in a contribution to the latest issue of the journal “Science”.

The strong interaction binds neutrons and protons together to atomic nuclei. The knowledge of properties of nuclei and their theoretical description is basis for our understanding of nuclear matter and the development of the universe. Laboratory-based studies of reactions between atomic nuclei provide means to explore nuclear properties. These experiments allow to test and verify theories that describe properties of extended nuclear matter at different conditions, as present, for instance, in neutron stars in the universe. Several theories predict the formation of nuclear clusters like helium nuclei in dilute nuclear matter. This effect is expected to occur at densities significantly lower than saturation density of nuclear matter, as present in the inner part of heavy nuclei. A theory developed in Darmstadt by Dr. Stefan Typel predicts that such a condensation of helium nuclei should also occur at the surface of heavy nuclei. Goal of the experiment, which is presented in the latest issue of “Science”, was the verification of this prediction.

The present experiment bombarded tin isotopes with high-energy protons and detected and identified the scattered protons as well as knocked-out helium nuclei. Dr. Junki Tanaka and Dr. Yang Zaihong could demonstrate that the reaction occurs as a direct “quasi-elastic” scattering of the protons off preformed helium nuclei in the surface of tin nuclei. The extracted cross sections for different tin isotopes reveal a decrease of the formation probability with the neutron excess of the nuclei, which impressively confirms the theoretical prediction. This new finding, which has far-reaching consequences for our understanding of nuclei and nuclear matter, will now be studied in more detail in experimental programs planned at RCNP, and in inverse kinematics at RIKEN and the new FAIR facility at GSI, where also unstable heavy neutron-rich nuclei are accessible.

About TU Darmstadt
The Technical University (TU) of Darmstadt is one of Germany’s leading technical universities. TU Darmstadt incorporates diverse science cultures to create its characteristic profile. The focus is set on engineering and natural sciences, which cooperate closely with outstanding humanities and social sciences. Three research fields shape the profile of TU Darmstadt: I+I (Information and Intelligence), E+E (Energy and Environment) sowie M+M (Matter and Materials). We dynamically develop our portfolio of research and teaching, innovation and transfer, in order to continue opening up important opportunities for the future of society. Our 312 professors, about 4,500 scientific and administrative employees and about 25,400 students devote their talents and best efforts to this goal. In the UNITE! network, which unites universities from seven European countries, the TU Darmstadt is promoting the idea of the European university. Together with Goethe University Frankfurt and Johannes Gutenberg University Mainz, TU Darmstadt has formed the strategic Rhine-Main Universities alliance.