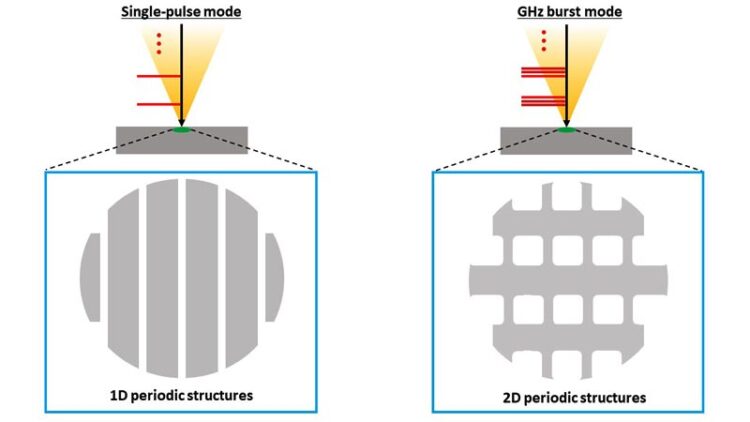 Previously, the team led by the researchers from the Advanced Laser Processing Research Team has reported that the GHz burst mode femtosecond laser pulses consisting of a series of trains of ultrashort laser pulses with a pulse interval of several hundred picoseconds (ps) greatly improve the ablation efficiency and quality as compared with the conventional femtosecond laser processing (single-pulse mode).

Published in International Journal of Extreme manufacturing (IJEM), the team applied the GHz burst mode to fabricate LIPSS on silicon substrates to show the ability of GHz burst for formation of unique nanostructures. They have demonstrated that the GHz burst mode femtosecond laser pulses create unique 2D LIPSS, that is distinct from the 1D structures fabricated by the conventional single-pulse mode of linearly polarized femtosecond laser.

In addition to 1D LIPSS fabricated by the single-pulse mode, whose direction is perpendicular to the laser polarization, another periodic structures parallel to the polarization direction are formed to create a lattice-like pattern by the GHz bust mode. Achievements of this study have shown that the GHz burst mode femtosecond laser processing offers distinguished advantages for not only ablation of materials but also other types of processing such as LIPSS formation, which opens a new avenue for micro and nanofabrication.

The team has further proposed a possible mechanism for the formation of 2D LIPSS formed by the GHz burst mode, which is regarded as the synergetic contribution of the electromagnetic and hydrodynamic mechanisms. Specifically, the generation of hotspots with highly enhanced electric fields by the localized surface plasmon resonance of subsequent pulses in the bursts within the nanogrooves of 1D LIPSS formed by the preceding pulses creates 2D LIPSS. Additionally, hydrodynamic instability including convection flow determines the final structure of 2D LIPSS. Based on this hypothesis, they successfully created well-defined 2D LIPSS by tailoring the envelope of the GHz burst.

Formation of LIPSS is a well-known phenomenon, which is realized on diverse solid surfaces by merely irradiating the material surfaces with multiple pulses of linearly polarized laser beam even in the air. Importantly LIPSS can functionalize the material surfaces to achieve surface coloring, reduction of friction, control of surface wettability, etc., which is attracting considerable interest in industrial applications. The ability of the GHz burst mode enabling the fabrication of 2D LIPSS will offer the possibility of the formation of more functionalized surfaces and thereby diversify the application and accelerate the commercialization.

Corresponding author, Prof. Koji Sugioka, said that “The results that the GHz burst mode femtosecond laser pulses can enhance the ablation efficiency with improved ablation quality, reported by Ilday’s group in 2016, have overturned common sense and significantly impacted the community of laser materials processing. Immediately after that, some groups including our group started to carry out experiments on GHz burst mode ablation of different types of materials for more detailed investigation. In the process of the GHz burst mode ablation study, we considered that more controlled energy deposition as compared with the single-pulse mode may also offer some advantages to other kinds of materials processing. Then, we applied the GHz burst mode to LIPSS formation and succeeded in showing interesting results. The obtained results may offer a new possibility of GHz burst mode for processing other than ablation, including microbonding, crystallization, polishing, two-photon polymerization, and internal optical waveguide writing. Thus, we believe that GHz burst mode will open new paths to femtosecond laser processing.”

One of the co-authors, Prof. Godai Miyaji, said that “Ultrashort pulse laser subtractive manufacturing is induced by three dominant phenomena of nonlinear optical absorption inside the material, energy transfer such as electron-electron scattering and electron-lattice scattering, and phonon excitation, and ablation. Here, the relaxation time of the excited state of the material is in a region of femtosecond to sub-microsecond. The conventional single-pulse mode induces ablation by the interaction process between femtosecond laser pulse and static material, while the GHz burst mode interacts with excited material in relaxation. It is expected to induce not only efficient and particular optical absorption by transiently changing in its dielectric constant but also the electromagnetic mechanical interactions under high-pressure and high-temperature conditions. This is a unique physical process that cannot be realized and controlled by the conventional single-pulse mode and is expected to open up new fields in science and technology, including the realization of novel ablation shapes and the creation of new materials through novel bonding structural changes.”

International Journal of Extreme Manufacturing (IF: 10.036) is a new multidisciplinary, double-anonymous peer-reviewed and diamond open-access without article processing charge journal uniquely covering the areas related to extreme manufacturing. The journal is devoted to publishing original articles and reviews of the highest quality and impact in the areas related to extreme manufacturing, ranging from fundamentals to process, measurement and systems, as well as materials, structures and devices with extreme functionalities.