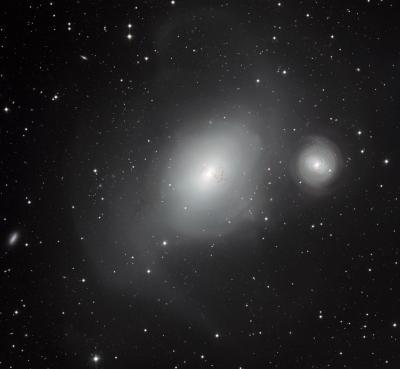 This new image from the MPG/ESO 2.2-metre telescope at ESO's La Silla Observatory in Chile shows a contrasting pair of galaxies: NGC 1316, and its smaller companion NGC 1317 (right). Although NGC 1317 seems to have had a peaceful existence, its larger neighbor bears the scars of earlier mergers with other galaxies. Credit: ESO

For instance, it has some unusual dust lanes [1] embedded within a much larger envelope of stars, and a population of unusually small globular star clusters. These suggest that it may have already swallowed a dust-rich spiral galaxy about three billion years ago.

Also seen around the galaxy are very faint tidal tails — wisps and shells of stars that have been torn from their original locations and flung into intergalactic space. These features are produced by complex gravitational effects on the orbits of stars when another galaxy comes too close. All of these signs point to a violent past during which NGC 1316 annexed other galaxies and suggest that the disruptive behaviour is continuing.

NGC 1316 is located about 60 million light-years away from Earth in the southern constellation of Fornax (The Furnace). It also bears the name Fornax A, reflecting the fact that it is the brightest source of radio emission in the constellation — and in fact the fourth brightest radio source in the entire sky [2]. This radio emission is driven by material falling into the supermassive black hole at the centre of the galaxy and has probably been provided with extra fuel by the interactions with other galaxies.

This very detailed new image from the MPG/ESO 2.2-metre telescope at ESO's La Silla Observatory in Chile was created by combining many individual images in the ESO archive. The aim of the original observations was to reveal the faintest features and study the disruption of this interesting system.

As a bonus the new picture also provides a window into the distant Universe far beyond the two bright galaxies in the foreground. Most of the faint fuzzy spots in the picture are much more distant galaxies — and there is a particularly dense concentration just to the left of NGC 1316.

[1] These dust lanes have been imaged in detail by the NASA/ESA Hubble Space Telescope.

[2] This applies at a radio frequency of 1400 MHz, at other frequencies the order will be different.

ESO is the foremost intergovernmental astronomy organisation in Europe and the world's most productive ground-based astronomical observatory by far. It is supported by 15 countries: Austria, Belgium, Brazil, the Czech Republic, Denmark, France, Finland, Germany, Italy, the Netherlands, Portugal, Spain, Sweden, Switzerland and the United Kingdom. ESO carries out an ambitious programme focused on the design, construction and operation of powerful ground-based observing facilities enabling astronomers to make important scientific discoveries. ESO also plays a leading role in promoting and organising cooperation in astronomical research. ESO operates three unique world-class observing sites in Chile: La Silla, Paranal and Chajnantor. At Paranal, ESO operates the Very Large Telescope, the world's most advanced visible-light astronomical observatory and two survey telescopes. VISTA works in the infrared and is the world's largest survey telescope and the VLT Survey Telescope is the largest telescope designed to exclusively survey the skies in visible light. ESO is the European partner of a revolutionary astronomical telescope ALMA, the largest astronomical project in existence. ESO is currently planning the 39-metre European Extremely Large optical/near-infrared Telescope, the E-ELT, which will become “the world's biggest eye on the sky”.