Home / Physics and Astronomy / First measurements of radiation levels on the moon
28.09.2020 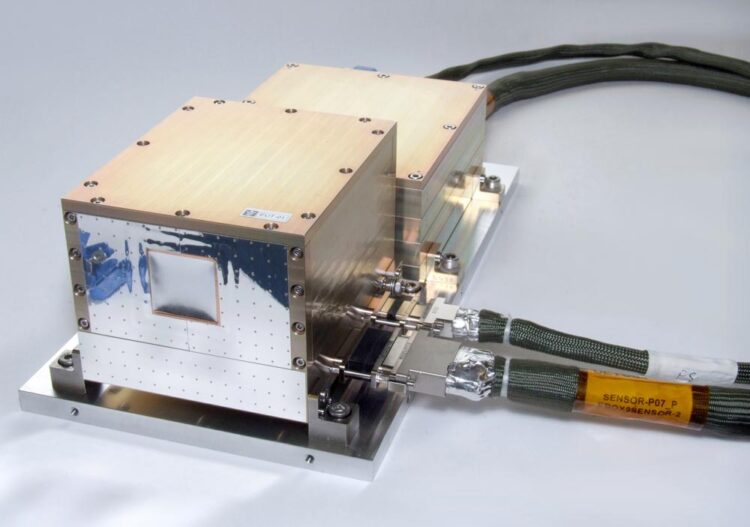 The LND in the laboratory in Kiel before the launch. © Stefan Kolbe, Kiel University

In the coming years and decades, various nations want to explore the moon, and plan to send astronauts there again for this purpose. But on our inhospitable satellite, space radiation poses a significant risk. The Apollo astronauts carried so-called dosimeters with them, which performed rudimentary measurements of the total radiation exposure during their entire expedition to the moon and back again.

In the current issue (25 September) of the prestigious journal Science Advances, Chinese and German scientists report for the first time on time-resolved measurements of the radiation on the moon.

The “Lunar Lander Neutron and Dosimetry” (LND) was developed and built at Kiel University, on behalf of the Space Administration at the German Aerospace Center (DLR), with funding from the Federal Ministry for Economic Affairs and Energy (BMWi). The measurements taken by the LND allow the calculation of the so-called equivalent dose. This is important to estimate the biological effects of space radiation on humans. “The radiation exposure we have measured is a good benchmark for the radiation within an astronaut suit,” said Thomas Berger of the German Aerospace Center in Cologne, co-author of the publication.

The measurements show an equivalent dose rate of about 60 microsieverts per hour. In comparison, on a long-haul flight from Frankfurt to New York, it is about 5 to 10 times lower, and on the ground well over 200 times lower. Since astronauts would be on the moon for much longer than passengers flying to New York and back, this represents considerable exposure for humans, said Robert Wimmer-Schweingruber from Kiel University, whose team developed and built the instrument.

“We humans are not really made to withstand space radiation. However, astronauts can and should shield themselves as far as possible during longer stays on the moon, for example by covering their habitat with a thick layer of lunar soil,” explained second author Wimmer-Schweingruber. “During long-term stays on the moon, the astronauts’ risk of getting cancer and other diseases could thus be reduced,” added co-author Christine Hellweg from the German Aerospace Center.

The measurements were taken on board the Chinese lunar lander Chang’e-4, which landed on the far side of the moon on 3 January 2019. The device from Kiel takes measurements during the lunar “daylight”, and like all other scientific equipment, switches off during the very cold and nearly two-week-long lunar night, to conserve battery power. The device and lander were scheduled to take measurements for at least a year, and have now already exceeded this goal. The data from the device and the lander is transmitted back to earth via the relay satellite Queqiao, which is located behind the moon.

The data obtained also has some relevance with respect to future interplanetary missions. Since the moon has neither a protective magnetic field nor an atmosphere, the radiation field on the surface of the moon is similar to that in interplanetary space, apart from the shielding by the moon itself. “This is why the measurements taken by the LND will also be used to review and further develop models that can be used for future missions. For example, if a manned mission departs to Mars, the new findings enable us to reliably estimate the anticipated radiation exposure in advance. That’s why it is important that our detector also allows us to measure the composition of the radiation,” said Wimmer-Schweingruber.

The work on the LND was funded by the Federal Ministry for Economic Affairs and Energy (BMWi) under funding code 50JR1604, based on a decision by the German Bundestag (federal parliament).

Illustration:
The Chang’e-4 lunar probe, photographed from the Yutu-2 rover. The measuring device from Kiel is located on the left behind the antenna. © CNSA/CLEP

http://www.uni-kiel.de/de/pressemitteilungen/2020/203-LND.jpg The LND in the laboratory in Kiel before the launch. © Stefan Kolbe, Kiel University

Comparison of the radiation dose on Earth, Moon and Mars:
http://www.uni-kiel.de/de/pressemitteilungen/2020/203-radiation-levels-earth-moon-mars.PPTX Copyright information in the presentation

Background information:
Kiel tradition: For over 50 years, Kiel University has investigated to origin of space radiation, how it spreads through space, and how dangerous it is for astronauts or possible extraterrestrial life. In addition to the device from Kiel on the moon, another instrument from Kiel has been measuring the radiation on Mars since 6 August 2012. On 10 February 2020, three more devices from Kiel were launched on the ESA space probe Solar Orbiter, which measure the origin and spread of the radiation. These measurements are important for understanding space weather, and over much longer time periods also so-called “astrobiology”. In this scientific field, scientists investigate if and how life could emerge and spread on other celestial bodies.