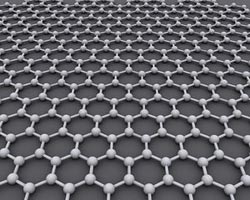 Graphene is an atomic-scale honeycomb lattice made of carbon atoms. © AlexanderAlUS<br>

Graphene — a single layer of carbon atoms packed in a hexagonal lattice — has a number of appealing properties owing to its two-dimensional geometry.

It has, for one thing, good electrical conductivity that is of interest to high-speed electronic applications. Seng Ghee Tan at the A*STAR Data Storage Institute and co-workers at the National University of Singapore have now shown that graphene has additional applications in magnetic data storage.

They have developed a method to measure magnetic fields by detecting changes in the electrical resistance of graphene. “The findings could open up new avenues in the development of miniaturized magnetic field sensors,” says Tan.

Electrons move inside graphene almost without any hindrance from the atoms of the two-dimensional carbon sheet. This good transport property is of interest to the development of magnetic field sensors because the change in charge transport in the presence of a magnetic field can lead to a measurable change in electrical resistance. Unfortunately, in previous devices thermal excitations of the electrons at room temperature have dominated over this magnetoresistance effect and so far have hindered the use of graphene for this purpose.

To address this problem, Tan and co-workers used a transistor device made from graphene nanoribbons (see image). Unlike conventional graphene sheets, the geometric restriction of the nanoribbons leads to a gap in the electronic states (bandgap) of the ribbons, which makes them semiconducting similar to silicon.

The nanoribbon transistor modifies the bandgap in a way that prevents the flow of electrical charges through the device (high resistance). A magnetic field, however, causes the bandgap of the nanoribbons to close, so that electrical charges now can travel freely across the device (low resistance). Overall, the researchers were able to change the electrical resistance by more than a factor of a thousand by varying the magnetic field from zero to five teslas. In addition, the electronic bandgap in the off state was sufficiently large so thermal excitations of the electrons were minimal.

“We could suppress the noise considerably because of the energy barrier of the device,” says Tan. “As a result, we have a better chance to deliver a high magnetoresistance signal even at room temperature.”

For commercial applications, however, further research may be required, as the fabrication of the devices remains challenging. The width of the graphene nanoribbons is only 5 nanometers, which is smaller than the feature size of present commercial transistor structures. Nevertheless, the impressive device performance achieved in the laboratory clearly demonstrates the potential of graphene also for magnetic applications.

The A*STAR-affiliated researchers contributing to this research are from the Data Storage Institute.