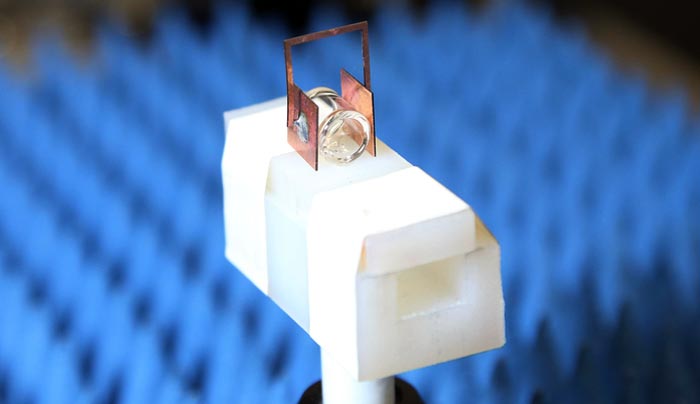 Copper “headphones” boost the sensitivity of NIST’s atomic radio receiver, which is composed of a gas of cesium atoms prepared in a special state inside the glass container. When an antenna located above the setup sends down a radio signal, the headphones boost the strength of the received signal a hundredfold.
Credit: NIST

Researchers at the National Institute of Standards and Technology (NIST) have boosted the sensitivity of their atomic radio receiver a hundredfold by enclosing the small glass cylinder of cesium atoms inside what looks like custom copper “headphones.”

The structure — a square overhead loop connecting two square panels — increases the incoming radio signal, or electric field, applied to the gaseous atoms in the flask (known as a vapor cell) between the panels. This enhancement enables the radio receiver to detect much weaker signals than before. The demonstration is described in a new paper.

The headphone structure is technically a split-ring resonator, which acts like a metamaterial — a material engineered with novel structures to produce unusual properties. “We can call it a metamaterials-inspired structure,” NIST project leader Chris Holloway said.

NIST researchers previously demonstrated the atom-based radio receiver. An atomic sensor has the potential to be physically smaller and work better in noisy environments than conventional radio receivers, among other possible advantages.

The vapor cell is about 14 millimeters (mm) long with a diameter of 10 mm, roughly the size of a fingernail or computer chip, but thicker. The resonator’s overhead loop is about 16 mm on a side, and the ear covers are about 12 mm on a side.

The NIST radio receiver relies on a special state of the atoms. Researchers use two different color lasers to prepare atoms contained in the vapor cell into high-energy (“Rydberg”) states, which have novel properties such as extreme sensitivity to electromagnetic fields. The frequency and strength of an applied electric field affects the colors of light absorbed by the atoms, and this has the effect of converting the signal strength to an optical frequency that can be measured accurately.

A radio signal applied to the new resonator creates currents in the overhead loop, which produces a magnetic flux, or voltage. The dimensions of the copper structure are smaller than the radio signal’s wavelength. As a result, this small physical gap between the metal plates has the effect of storing energy around the atoms and enhancing the radio signal. This boosts performance efficiency, or sensitivity.

The loop and gap sizes determine the natural, or resonant, frequency of the copper structure. In the NIST experiments the gap was just over 10 mm, limited by the outside diameter of the available vapor cell. The researchers used a commercial mathematical simulator to determine the loop size needed to create a resonant frequency near 1.312 gigahertz, where Rydberg atoms switch between energy levels.

Several outside collaborators helped model the resonator design. Modeling suggests the signal could be made 130 times stronger, whereas the measured result was roughly a hundredfold, likely due to energy losses and imperfections in the structure. A smaller gap would produce greater amplification. The researchers plan to investigate other resonator designs, smaller vapor cells and different frequencies.

With further development, atom-based receivers may offer many benefits over conventional radio technologies. For example, the atoms act as the antenna, and there is no need for traditional electronics that convert signals to different frequencies for delivery because the atoms do the job automatically. The atom receivers can be physically smaller, with micrometer-scale dimensions. In addition, atom-based systems may be less susceptible to some types of interference and noise.

The research is funded in part by the Defense Advanced Research Projects Agency and the NIST on a Chip program. Modeling assistance was provided by collaborators from the University of Texas, Austin; City University of New York, N.Y.; and University of Technology Sydney, Australia.