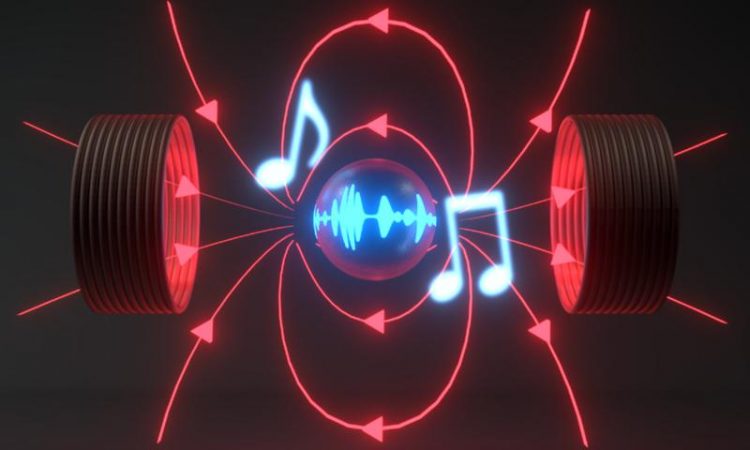 A team of physicists led by Oriol Romero-Isart at the University of Innsbruck and the Austrian Academy of Sciences is proposing to cool microparticles with sound waves. Carlos Sánchez Muñoz

While quantum physics is usually concerned with the basic building blocks of light and matter, for some time scientists have now been trying to investigate the quantum properties of larger objects, thereby probing the boundary between the quantum world and everyday life.

For this purpose, particles are slowed down with the help of electromagnetic waves and the motional energy is drastically reduced. Therefore, one also speaks of “motional cooling”.

Quantum properties occur when particles are cooled to their fundamental quantum ground state, that is to the lowest possible energy level. While so far the only way to cool particles to the ground state has been to make them interact with photons trapped in an electromagnetic resonator, theoretical physicists led by Carlos Gonzalez-Ballestero and Oriol Romero-Isart from the Department of Theoretical Physics at the University of Innsbruck and the Institute of Quantum Optics and Quantum Information (IQOQI) of the Austrian Academy of Sciences in collaboration with experimentalist Jan Gieseler from Harvard University and ICFO in Barcelona now propose to make the motion of magnetic particles interact with the internal acoustic waves that are confined inside every particle.

In analogy to photons – the quanta of light – vibrations in a solid body can be described as so-called phonons. These small sound wave packets propagate through the crystal lattice of the solid. “The phonons are very isolated and interact with the movement of the particle motion only through magnetic waves,” explains Carlos Gonzalez-Ballestero.

“In our work we now show that this interaction can be controlled by a magnetic field.” This allows to realize quantum experiments without photons, and therefore even with light-absorbing particles.

“Conversely, we also show that the strong interaction between motion and phonons provides a path to probe and manipulate the elusive and exotic dynamics of acoustic and magnetic waves in very small particles,” adds Oriol Romero-Isart. The new method also opens up new possibilities for quantum information processing, for example, by using phonons as a quantum memory.

Two papers of the Innsbruck physicists present their new approach in the journals Physical Review Letters and Physical Review B. Financial support was provided by the European Union.