Change of course on the journey to the island of stability 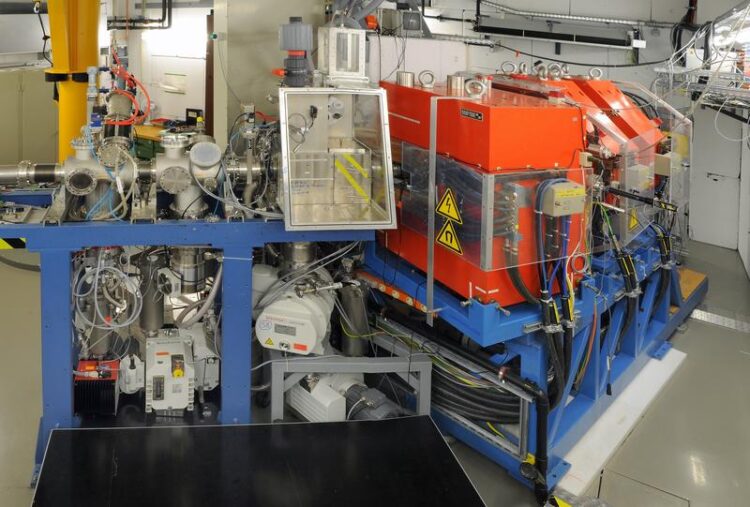 The TASCA recoil separator at GSI Darmstadt: The calcium beam from the UNILAC accelerator passed through the beamline visible on the left of the image to the target area (center of image) where nuclear fusion leading to flerovium production took place.
Photo: G. Otto/GSI Helmholtzzentrum für Schwerionenforschung

An international research team succeeded in gaining new insights into the artificially produced superheavy element flerovium, element 114, at the accelerator facilities of the GSI Helmholtzzentrum für Schwerionenforschung in Darmstadt, Germany. Under the leadership of Lund University in Sweden and with significant participation of Johannes Gutenberg University Mainz (JGU) as well as the Helmholtz Institute Mainz (HIM) in Germany and other partners, flerovium was produced and investigated to determine whether it has a closed proton shell. The results suggest that, contrary to expectations, flerovium is not a so-called “magic nucleus”.

The results were published in the journal Physical Review Letters and additionally highlighted with a synopsis by the American Physical Society.

In the late 1960s, Sven-Gösta Nilsson, then a physics professor at Lund University, and others formulated a theory about the possible existence of still unknown superheavy elements. In the meantime, such elements have been created and many predictions have been confirmed. The discovery of the six new elements 107 to 112 was achieved at GSI in Darmstadt, and further ones up to element 118 are now known as well. Strongly increased half-lives for the superheavy elements due to a “magic” combination of protons and neutrons were also predicted. This occurs when the shells in the nucleus, each holding a certain number of protons and neutrons, are completely filled. “Flerovium, element 114, was also predicted to have such a completed, ‘magic’ proton shell structure. If this were true, flerovium would lie at the center of the so-called ‘island of stability’, an area of the chart of nuclides where the superheavy elements should have particularly long lifetimes due to the shell closures,” explains Professor Dirk Rudolph of Lund University, who is the spokesperson of the international experiment.

Nilsson’s theories inspired the international collaboration led by the Lund group to investigate whether flerovium nuclei indeed exhibit the predicted magical properties. Their experiments, performed at the UNILAC accelerator at GSI in Darmstadt in the framework of the FAIR Phase 0 experimental program, lasted 18 days. Every second, four trillion calcium-48 nuclei with 20 protons were accelerated to ten percent of the speed of light. They irradiated a thin foil containing rare plutonium-244 with 94 protons to produce atomic nuclei of flerovium, which has 114 protons, by nuclear fusion. This so-called target was produced at the Department of Chemistry at JGU, using, plutonium provided, among others, by the Lawrence Livermore National Laboratory, USA. Strong magnets of the GSI recoil separator TASCA separated the flerovium nuclei from the intense calcium ion beam; subsequently they were registered in a detector setup specifically developed in Lund for this experiment.

The detector measured the radioactive decay of 30 flerovium nuclei — i.e., the emission of nuclear fragments of flerovium — with high efficiency and accuracy. By precisely analyzing these fragments and their emission times, the team was able to determine unusual decay channels of flerovium nuclei that could not be reconciled with its originally predicted “magical” properties. “Our study shows that element 114 is no more stable than others in its vicinity. This is a very important piece of the puzzle in the continued search for the center of the coveted island of stability,” said Professor Christoph Düllmann, professor of nuclear chemistry at JGU and head of the research groups at GSI and HIM.

The new results will be of great benefit to science. Instead of continuing to search for the center of the island of stability in the region of element 114, even heavier ones like the as yet undiscovered element 120, will now move into the spotlight.