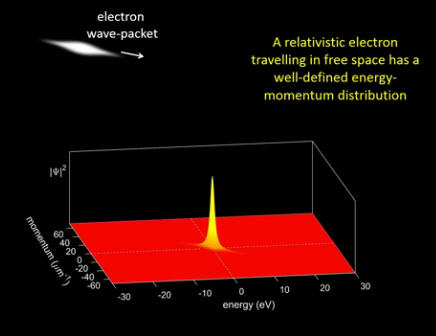 A video illustrating the experiments and findings of this study. Credit: Fabrizio Carbone/EPFL

In fact, one of the most elusive phenomena in physics is the excitation of an atom's nucleus by absorption of an electron. The process, known as “nuclear excitation by electron capture” (NEEC), was theoretically predicted fourty years ago, though it proved difficult to observe experimentally.

But in February 2018, US physicists were finally able to catch a glimpse of NEEC in the lab. The work was hailed as ushering in new nuclear energy-harvesting systems, as well as explaining why certain elements like gold and platinum are so abundant in the universe.

The EPFL researchers in their publication suggest a way of potentially exploiting the several orders of magnitude in energy harvesting possibly present in the nucleus of an atom via the coherent control of the NEEC effect. Such method would be enabled by the availability of ultrashort (as to zs) electron flashes.

“Ideally, one would like to induce instabilities in an otherwise stable or metastable nucleus to prompt energy-producing decays, or to generate radiation,” says Carbone. “However, accessing nuclei is difficult and energetically costly because of the protective shell of electrons surrounding it.”

The authors state: “Our coherent control scheme with ultrashort electron pulses would offer a new perspective for the manipulation of nuclear reactions with potential implications in various fields, from fundamental physics to energy-related applications.”