A structural light switch for magnetism 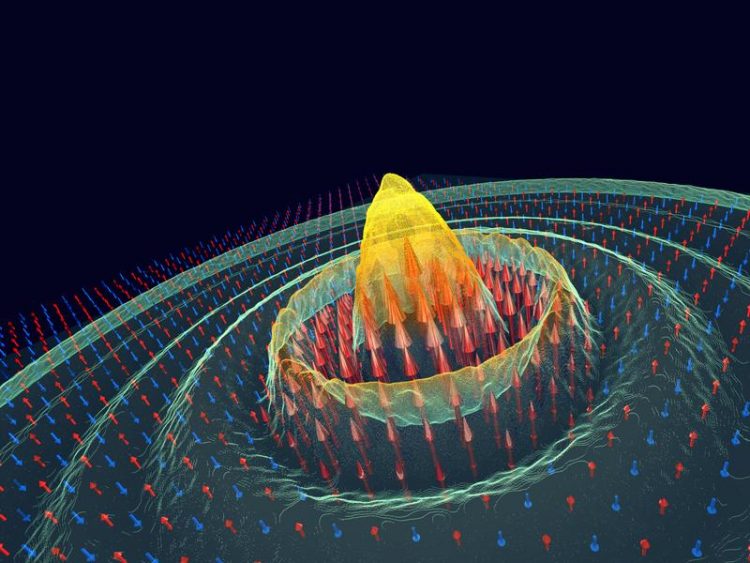 The antiferromagnet CoF₂ transforming into a ferrimagnet under optical excitation. The red and blue arrows show the original anti-parallel spins. Thz light induces changes in the crystal structure, polarising the spins. This creates a new magnetic state. Jörg Harms / MPSD

Magnetic materials have been a mainstay in computing technology due to their ability to permanently store information in their magnetic state. Current technologies are based on ferromagnets, whose states can be flipped readily by magnetic fields.

Faster, denser, and more robust next-generation devices would be made possible by using a different class of materials, known as antiferromagnets. Their magnetic state, however, is notoriously difficult to control.

The strength and direction of a magnet’s “north pole” is denoted by its so-called magnetization. In ferromagnets, this easily reversible magnetization can represent a “bit” of information, which has made them the materials of choice for magnet-based technologies.

But ferromagnets are slow to operate and react to stray magnetic fields, which means they are prone to errors and cannot be packed very closely together.

Antiferromagnets represent an exciting alternative. Unlike ferromagnets, they have no macroscopic magnetization, as they are made up of alternating up and down pointing “magnetic moments”, like atomic-sized bar magnets which flip direction from one atom to the next.

They are not strongly affected by magnetic fields, which makes them robust for information storage and the allows them to be scaled to much smaller sizes.

In addition, they could respond faster than current devices, with frequencies up to several terahertz. The challenge for researchers is to find ways to reliably change the magnetic state of an antiferromagnet.

In their new paper, the MPSD/Oxford research team followed a novel approach, investigating how the magnetic state of an antiferromagnet is affected by its crystal structure. They exploited a property of some antiferromagnets called piezomagnetism, where a change in the atomic structure leads to a magnetization, just like in a ferromagnet.

This change is usually achieved by applying a uniaxial pressure – but this is a slow process which can break the crystal.

Instead of pressure, the team used light to control the piezomagnetic effect in CoF₂. The method, originating from the group in Hamburg in 2011, is based on exciting lattice vibrations, or “phonons,” with carefully tailored light pulses. By tuning the frequency and polarization of the light pulses, they could induce the same structural distortions that give rise to piezomagnetism without having to strain the crystal—an experimental idea proposed by co-author Paolo Radaelli from Oxford University while visiting the MPSD in 2018.

This innovative technique allowed the researchers to create a magnetization 400 times larger than previously achieved. Strikingly, it only took around 100 ps for the magnetization to develop and the direction of the magnetization could be reversed by changing the light’s polarization. The results represent a major advance in the optical control of materials’ properties.

Lead author Ankit Disa says: “This experiment was the first demonstration of ‘rationally’ or ‘intentionally’ engineering a crystal structure with light. We knew what type of structural distortion was needed in order to create a phase transition from an antiferromagnet to a ferromagnet-like state. The trick was to understand how to use light to drive the material into this new crystal structure.”

Andrea Cavalleri, who led the experimental team at the MPSD and is involved with the excellence cluster CUI : Advanced Imaging of Matter, sees vast potential in the use of light to control materials’ properties:

“This technique could lead to optomagnetic switches, for example, to make memories that could be written and read by light. More fundamentally, we now have the tools and understanding to optically engineer the structure of materials on the atomic scale, which can be applied to manipulate functionalities in many kinds of systems from magnets to ferroelectrics to superconductors.”